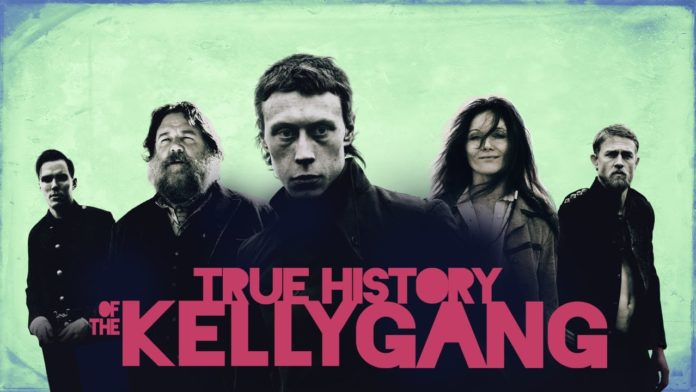 Much like football games the True History of the Kelly Gang is a film of two halves and much like football players fleeing the paparazzi outside the court where they’ve been prosecuted for spit roasting teenagers in a Travelodge the True History of the Kelly Gang’s lead character also hides his head under a bucket though here this is for armour in a shoot out.

The first half of the film is titled ‘Boy’  and covers the early childhood of notorious Australian outlaw Ned Kelly (Orlando Schwerdt) son to Ellen (the always good Essie Davis) who he sneaks a peak at as she ‘services’ Charlie Hunnam’s military officer Sergeant O’Neil. Hunnam has only a few brief scenes in this, most of which are him in flagrante delicto making the appeal of the acting job obvious but it soon ….um…..comes to a head. With Russel Crowe as Kelly’s surrogate father Harry Power,  looking like a bloated Dickensian Worzel Gummidge stumbling across a secret stash of Mr Kipling’s cakes, along with the boy Kelly,  burst into Sergeant O’Neil’s bedroom with Power enthusiastically imploring Kelly to, ‘shoot his cock off’. Is it any wonder Kelly turned out as he did? Crowe is great in what is a minor role and the film would have benefited from more of him.

The True History of the Kelly Gang is more about the influences on Kelly’s childhood which makes him the man he eventually becomes. So when he finds early on that his father is a cross dresser having stumbled across his box of frocks its embedded in his psyche popping up in the 2nd half of the film. But it’s the second half of the film which is far less interesting with George Mackay fresh off his success in 1917 as the adult Kelly descending into leering lunacy aided by Nicholas Hoult as Constable Fitzpatrick . Directed by Justin Kurzel  the True History of the Kelly Gang is the latest in his look at toxic masculinity following on from his debut feature ‘Snowtown’ and the stunning Macbeth and like that last film this has some beautifully photographed moments amongst the brutality. Based on the book by Peter Carey  it’s not quite the true story it purports to be with a significant moments fictionalized but for Ned Kelly enthusiasts this is another entry in a long line of films about the outlaw with a slightly different if not always wholly successful slant.

Here’s the True History of the Kelly Gang trailer…….

The best and worst Predator films…….