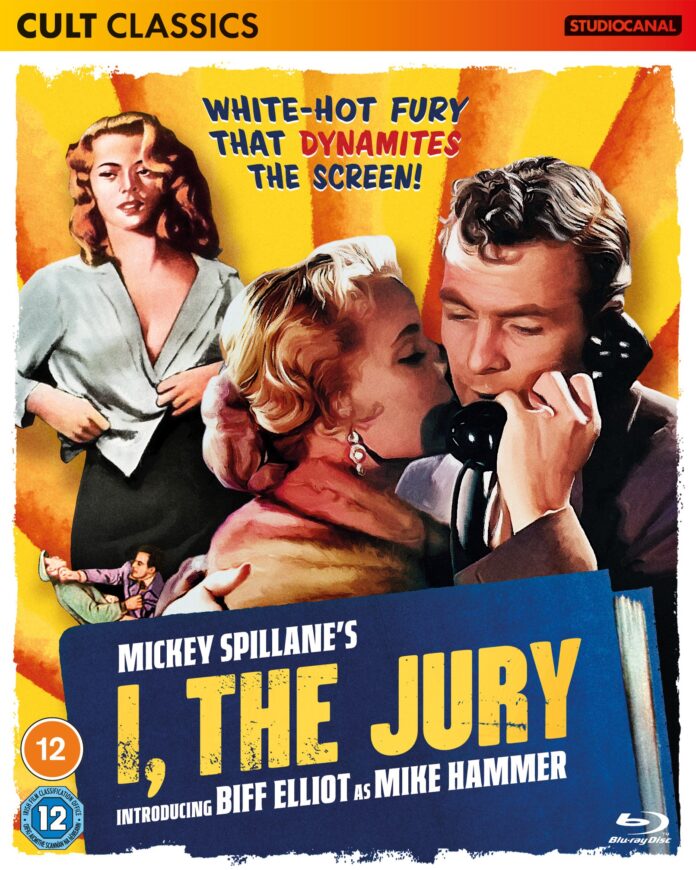 Mickey Spillane was the architect of the modern day movie hard man when his now iconic character Mike Hammer started appearing in a series of hard boiled noir style thrillers and filmmakers soon optioned his books with ‘I, the Jury’ being the first to hit the big screen in 1953. Spillane was as gruff a real life character as his creation refusing to be called an author preferring the title ‘writer’, ‘because writer’s make money‘ being his rationale (he’s obviously never worked for our Editor!)

Set at Christmas time in New York City private investigator Mike Hammer is out for vengeance when his closest friend Jack Williams is murdered. Hammer vows to identify the killer ahead of the police, working his way through an increasingly large number of suspects. His starting point includes Jack’s fiancée, a beautiful psychiatrist, twin socialite sisters, and a gangster. But as he tracks them down, so too does the murderer, creating a dangerous game of cat and mouse.

Director Tom George talks about all star murder mystery, ‘See How They Run’

I, the Jury was a title that suitably summed up Hammer, the sort of detective not seen before and all too ready to use his fists rather than questions to get answers and arguably was an early precursor to films like Dirty Harry and from thereon the lone cop getting justice by any means necessary became a staple of cinema. Audiences were stunned by this depiction of a detective and censors readily slapped it with an X certificate (the equivalent of a modern day 18 certificate) and it’s a sign of how times have changed that its release on 4k blu-ray, DVD & digital now has as 12 certificate.

Playing Hammer was Biff Elliott a New York stage actor who had appeared in a handful of TV shows and this was his first lead in a theatrically released film. It almost never happened with Elliott refusing to meet the producers in LA unless he had been offered the role and signed the contract. The film would be written and directed by Harry Essex in what would be the first of only four films he ever directed and was better known for his screenplays that included 1947’s Dragnet movie, cult sci-fi film, ‘It Came From Outer Space’ and horror classic ‘Creature from the Black Lagoon’. Bizarrely the film had been shot in 3D format for no discernible reason other than there had been a fad for the format but it had waned and audiences went to see the standard 2D version. Running at a brisk 87 minutes the film didn’t hang around breezing through a brutal story making it an enjoyable watch for fans of the genre.

Stephen Moyer investigates the Krays in ‘Code of Silence’

This 4K restoration is well done with the excellent cinematography served well by a crisp transfer. There are only 3 bonus features on the disc of varying quality. A Q&A from 2006 with the late Biff Elliott is interesting marred only poor sound quality and an interviewer too fond of his own voice. A commentary by Elliott is equally good (at least you can clearly hear what he is saying) and a second commentary by novelist Max Allan Collins puts the film into context with occasional insight into Spillane’s writing.

The film made money and further Hammer films followed and a less successful version of  I. the Jury was remade in 1982 with Armand Assante in the title role and a supporting cast of decent character actors that included Alan King, Geoffrey Lewis and Paul Sorvino all of whom are no longer with us.  But it was overlong and a shadow of the 1953 version and fans should stick with the original with Elliott in what would be the first and last time he played the role.

‘I, the Jury’ is out now on 4K blu-ray, DVD and digital download.

Where to Invade Next – REVIEW