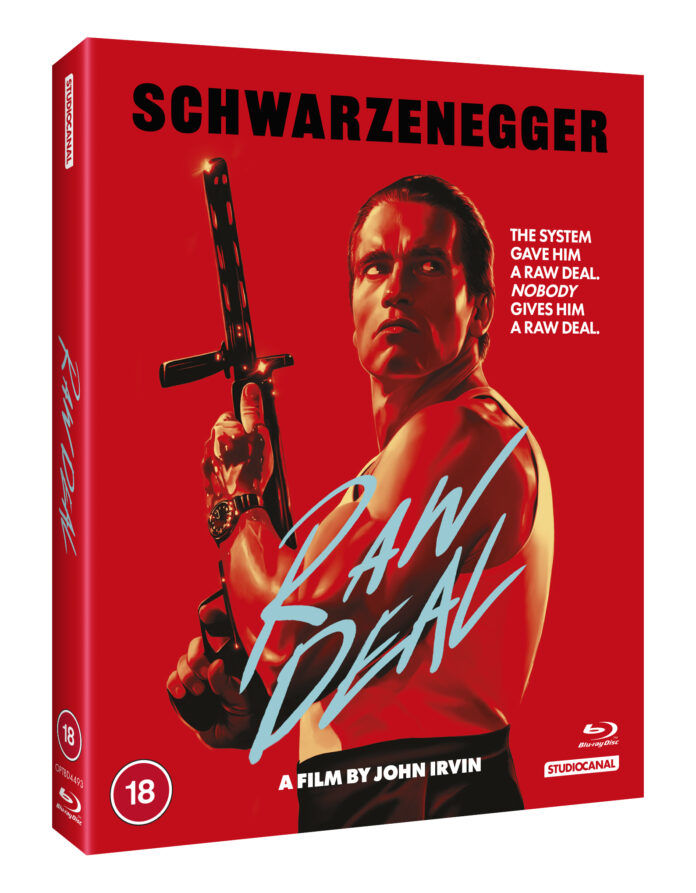 Though Arnold Schwarzenegger had been appearing in films throughout the 1970s it was invariably as ‘muscleman’ but things started changing for him in the 1980’s.  Ideally cast in two consecutive Conan films for producer Dino De Laurentiis as well as in swords and sandals film Red Sonja that came out the same year as ‘The Terminator’ a film that he would be forever associated. But after this there was a slight lull. 1985’s ‘Commando’ which was good fun but perhaps the film in his 1980’s back catalogue that is overlooked or just plain old forgotten is Raw Deal. Perhaps rightly so.

Arnie plays a former FBI agent forcibly retired due to his penchant for brutality and now works as a small town sheriff where he doesn’t seem to have learnt much in terms of toning down his use of force. It’s an old FBI friend who asks for his help in what is an unofficial operation to take down a mob family led by actor Sam Wanamaker. Who better to ask to carry out a lone wolf covert operation than a high profile Sheriff built like a mountain. Frankly anyone and Arnie goes about what should be a low key sneaky beaky job but instead blows up oil refineries, ploughs through a house in a truck through a house and finally shooting villains dead whilst driving at speed through a quarry.  Raw Deal is as ludicrous as it sounds and Arnie’s only characterization seems to be having his hair slicked back when he goes undercover.

To be fair to Arnie was under contract to DeLaurentiis and was keen to get out of it and it was agreed that to get out of the agreement he would star in the film. Raw Deal, therefore was an appropriate title and would be directed by John Irvin who had an eclectic back catalogue of films that included the classic TV series Tinker Tailor Soldier Spy with Alec Guinness, The Dogs of War an adaptation of a Frederick Forsyth novel, Ghost Story – a ghost story, ‘Champion’ the true life story of cancer surviving jockey Bob Champion. The action in Raw Deal is serviceable stuff but not on a par with the films Arnie would go on to make with John McTiernan (Predator), and of course James Cameron. Added to that is Arnie out of place in love scenes and he was aware enough to know that that was not where his …ahem….strength on screen lay and the scenes with a flirty gangsters moll are  unconvincing and he had argued with DeLaurentiis about it before eventually relenting.

Raw Deal was something of a stop gap film for the star with Predator mercifully getting his action star status back on track. De Laurentiis was keen to make money on the film so he could finance Total Recall which he owned and had opposed Arnie from starring. Raw Deal failed. Even with editor Anne V Coates, who had cut Lawrence of Arabia & The Elephant Man, onboard  and earned a measly $16m ( whereas his previous film ‘Commando’ had made $57m and was contributory factor is the producer having to relinquish control of the Total Recall script when his company found itself in financial difficulties.

Read about Arnie & Paul Verhoeven’s work on the Total Recall

This disc is then on decent extras. The Man who made Hollywood documentary is similar if not identical to that on the recent release of a Red Sonja disc and there’s a better documentary though unusually its far from deferential to the film laying into it and explaining why it’s far from Arnie’s best. The only other extra is a trailer in a 4 x 3 format that is VERY 80’s and hilariously dated by today’s standards.

Arnie’s quickly put Raw Deal behind him and his star was soon on the ascent again reaching its pinnacle with Terminator 2 and this new Raw Deal disc is probably for completists only.