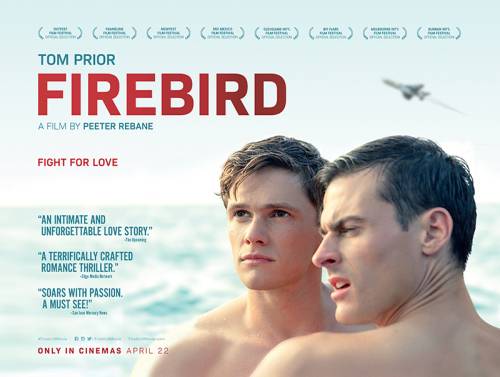 The world ‘s a far more progressive place than it was back in the 1970’s or at least the Western world is because Russia under Putin seems to have become more regressive even having gone as far as introducing a law prohibiting what might be perceived as gay propaganda as seen with the release of the Elton John biopic, ‘Rocketman’ (read the story HERE). Firebird is the true story of a young Russian private Sergey Fetisov (but here his surname is changed to Serebrennikov) played by Tom Prior who in 1970 is coming towards the end of his National Service at an Estonian army base and looking to become an actor when he leaves. Though a strict sergeant enforces order like some soviet version role model for Full Metal Jacket’s Gunnery Sgt Hartman the young private has a decent existence with a good friend Volodja and having caught the eye of Luisa (Diana Pozharskaya) a secretary in the base.

But this all changes when a top fighter pilot (Roman (Oleg Zagordnii) arrives and Sergey becomes his  guide on the base. But it quickly soon develops into much more than their shared love of music and ballet as the two become attracted to each other at a time when homosexuality in the USSR but especially in its military was outlawed and punishable with up to five years in prison. And when the base senior officers and KGB are anonymously tipped off the pair finds themselves under scrutiny. For Sergey and Roman it becomes too much with Sergey leaving and moving back to Russia to become an actor whereas for Roman  ends up marrying Luisa and having a child but he is still unable to resist the lure of finding Sergey and reigniting their relationship but under such an oppressive soviet regime it is destined for almost inevitable sadness.

Co-written as well as starring Tom Prior the central relationship has an authenticity about it and is clever enough to use Hamlet’s immortal line ‘To be or not to be’ as Sergey ponders how to progress their relationship. With obvious nods to Brokeback Mountain and the more recent but less well known ‘Portrait of a Lady on Fire’ this is a timely reminder that when Russia tries to obliterate what it doesn’t see eye to eye with Firebird is a reminder of the importance of courage and love in the most oppressive scenarios.

We spoke to Tom Prior about the film…….