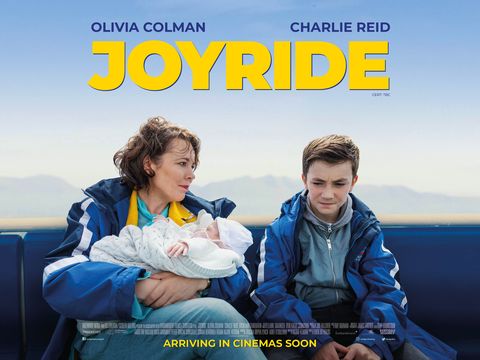 To coincide with the world premiere of JOYRIDE, which opens the Galway Film Fleadh  Vertigo Releasing has launched their first Joyride trailer and poster. The film is directed by Emmy-winning documentary maker Emer Reynolds and starring the Academy®, Emmy and Golden Globe Award winning Olivia Colman as Joy, a solicitor, who didn’t expect to get pregnant and certainly didn’t expect to be hijacked in a taxi stolen by a 12-year-old boy.

The Joyride trailer sees 12-year-old Mully (Charlie Reid) is fleeing from his father by stealing a taxi and is shocked to find a woman, Joy, in the back seat with a baby.  Joy is on her way to an important meeting, and Mully needs to get some distance from his dad, who’s after the cash Mully has with him.  The unlikely pair go on a journey across Ireland, gradually finding the friendship, love and learning, they never knew they needed, in each other.

As ever Olivia Colman looks on peak form and newcomer Charlie Reid looks like an actor to follow in what looks like a quirky human drama which may also be something of a tear jerker too.