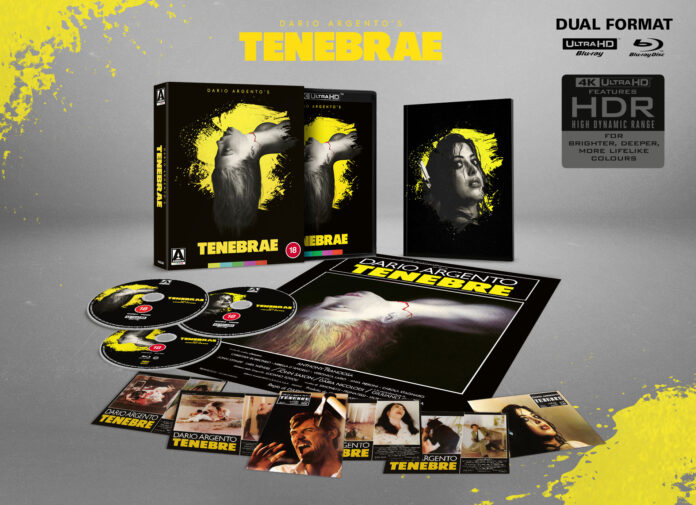 By 1982 writer director Dario Argento had secured a reputation as a master of the giallo thriller that had started in 1970 with his debut film, ‘Cat o Nine Tails’ and the 1970’s had seen Suspiria and Inferno. and whilst in LA writing he had been stalked with a series of phone calls that were murderous in intent Even when he moved home the mystery stalker still found his phone number and he understandably went back to Rome to work on his next film Tenebrae in what would be his return to giallo thriller that he had made his name

The malicious phone calls in LA had inspired his script where  a razor-wielding psychopath is stalking the thriller writer Peter Neal (Anthony Franciosa, -Death Wish II), in Rome to promote his latest work, Tenebrae. But the author isn’t the obsessive killer’s only target: the beautiful women who surround him are doomed as, one by one, they fall victim to the murderer’s slashing blade.

Argento would use the film as his riposte to accusations of sexism and misogyny that had, not unfairly, been levelled at his films. So unsurprisingly the film features a scene where a journalist aggressively accuses the films central character of such but the film never really offers a decent riposte. Beautiful women are often brutally slaughtered with a cut throat razor before the killer resorts to an axe as the story progresses and throughout several of the women are topless for seemingly little other reason than titilation – a topless woman on a beach is surrounded at waist level by four men, another topless woman leaves her shower to investigate a neighbour’s scream. Tenebrae culminates in a blood soaked finale where the bodies pile up and Argento adds several some decent stylistic touches from with a technically impressive a crane shot over and around a house (although it could equally have been achieved by several single shots clever edited into one ) and some creatively brutal – a victim gets an arm chopped off and sprays a white wall with a fountain of blood.

Tenebrae is the latest Argento work to be released by Arrow Films and has been given their customary excellent range of bonus features and for the first time includes the alternate US cut. There’s a very good commentary track from critic Kim Newman with Argento biographer Alan Jones as might be expected and is the best of the commentary tracks on the discs. One of the better bonus features is an archival interview with actor John Steiner who recounts how his career had been on the up and he had ended up in Rome with a girlfriend where he appeared in a load of decent Italian films before he began to fall out of favour as practices in the Italian film industry began to change for the worse. Added to this is a highly informative documentary about the giallo genre and its ongoing influence.

In all the features include:

Predator – director John McTiernan talks about the making of...