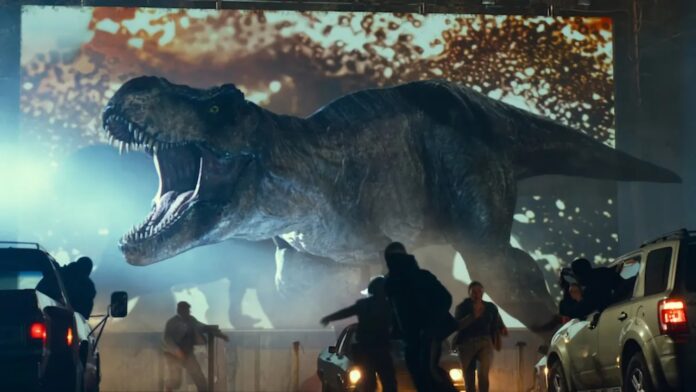 So the roll out of the summer blockbusters starts earlier each year and now that the lockdown is over we’re getting the blockbusters delayed by the pandemic. Having already had The Batman and Doctor Strange 2 about to open we now have the long awaited closing of the dinosaur franchise with the latest Jurassic World Dominion trailer.

Jurassic World: Dominion” is set in the present day, around four years after “Jurassic World: Fallen Kingdom.” Following the destruction of the Jurassic World theme park, genetically engineered dinosaurs were auctioned off by companies and released in the human world. Expect carnage …and the trailer shows just what we can look forward to on that front. ‘We created an ecological disaster,” Dern’s character says. ‘Well we could have told you that five films ago!’ is surely the audiences reply.

Returning for the film is the trilogy of actors from the first film Jeff Goldblum, Laura Dern and Sam Neill who will join Chris Pratt and Bryce Dallas Howard and from the trailer we can expect a huge array of bad tempered leathery old dinosaurs though surprisingly not one of them is Donald Trump.