As much as losing out on a role or not winning an award the other fear of fading botoxed movie stars is suffering the inevitable wrinkle in time which just so happens to be the title of the new Disney film based on the book by Madeleine L’Engle (see what we did there?  – Yes. You’re fired! – Ed).

Here Chris Pine, who like his name, gives a fittingly wooden performance as a dashingly handsome professor who along with his wife have discovered a calculation that takes them to another dimension in space in the blink of an eye or a wrinkle in time (see, we did it again! – ‘Yes and you’re still fired! – Ed). Their discovery about the unknown method of inexplicably travelling to another place has previously been discovered by our Editor who has been known to transport himself from The Nag’s Head and waking up in his own front garden with no idea as to how he got there. This only ever happens on a Friday night and without the aid of a complex mathematical equation but instead using 14 pints of strong lager. (‘You’re definitely fired!’ – Ed)

Having had the wobbly Scooby Doo effect which Pine walks into and the promptly disappears leaving his wife and two children not knowing where or why he’s gone  and his daughter  Meg (Storm Reid)  who looks like the bushy haired lad from dance group Diversity is tormented in spectacularly insensitive manner by the other girls at her school. The same goes for her little brother Charles Wallace (Deri McCabe) who, having heard his teachers talk about his absent Dad berates them  in an incomprehensible voice that sounds like he’s existed on a diet of helium.

The answer to where their father might be is provided by a typically chirpy performance by Reese Witherspoon turning up unannounced in their home one night dressed as a giant meringue with a furry ginger caterpillar on her head. It’s one of many many different costume and make up changes that she shares with other cast members which has an air of a nursery school aged designer off her bonce on tartrazine and E number loaded fruit squash. 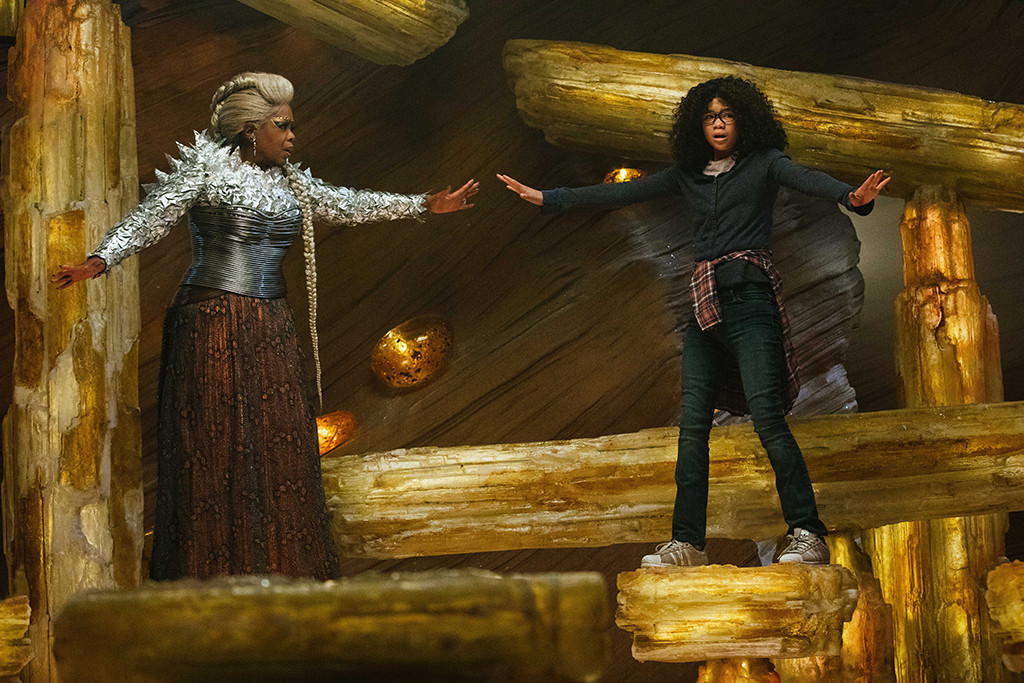 The children are offered a way to this other world to find their father and bring him home and are joined by Meg’s love interest,Calvin (Levi Miller). It’s an offer they take and transported to the inevitable wrinkle in time  – a world of CGI where they fly on a giant lettuce leaf having met a gargantuan Oprah Winfrey dressed like a gaudy unwanted ornament at a car boot sale.  It’s an odd role for her to have chosen because initially she seems to be there only to spout exposition. It’s one of several failings of the script which throws in science calculations as well as quotes from both Shakespeare and Churchill which will go right over the head of the films demographic. It’s a noble attempt to pander to a higher common denominator but here its seems forced and out of place.

Their quest to find their dad brings them into conflict with ‘the IT’  which is not a killer klown from a Stephen King novel though that films studio must be delighted by the unwitting product placement to their hit horror film. But ‘the IT’ is a dark demonic tentacled force that dwells on everyone’s negative thoughts and is illustrated by one of the better sequences in the film with a montage of how it impacts on young people’s image of themselves with issues such as body dysmorphia which blights so many teenagers self worth.

A Wrinkle in Time is a thin and unremarkable story but its theme of parental love is Disney through and through and whilst it may not be cool with kids its addressing of just how easily alienated children can become from their parents when absent from their lives and is especially  relevant for separated parents where a mother (and unfortunately it is usually the mother) deny children access to their father.  After a string of back to back blockbusters this is a rare misfire for Disney. Overlong and often convoluted with no satisfactory explanation for the alternate universe the kids find themselves in with only a message of the value of family to give the film any merit.