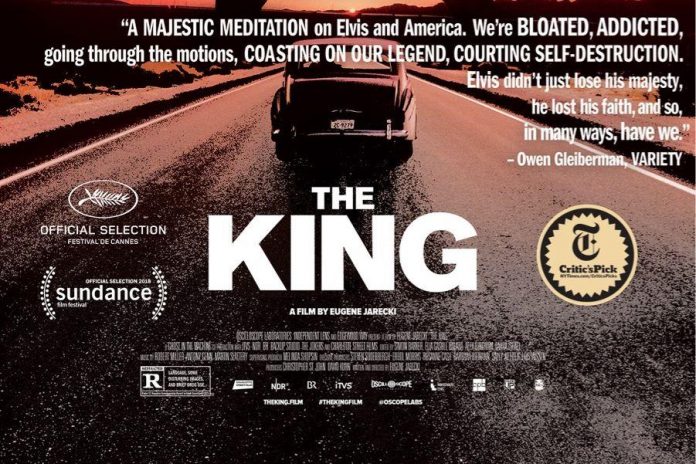 So we were talking about the new Elvis documentary, ‘The King’ to our Editor but wanting us to get on with the review he told us, ‘a little less conversation, a little more action’ (‘Stop it’ – Ed) We told him ‘Don’t be cruel’ (‘No more Elvis titles or your fired!’ – Ed) In fact the writers were All Shook Up (‘You’re all fired!’ -Ed).

Quite who appointed Elvis as The King is anyone’s guess but it’s one that Chuck D of Public Enemy takes great exception to as he noted in his rap classic, ’Fight the Power’ saying, ‘Elvis was a hero to most/but he never meant shit to me you see/ straight up racist that sucker was/ simple and plain/ f**k him and John Wayne’. It’s an argument that he and several other black artists put forward that whilst Elvis grew up in a poor black neighbourhood he appropriated black music, took songs by black artists and made them into hits but when he did become famous he did nothing for any minority groups especially the black community so it’s hardly surprising that Chuck D is vehemently opposed to Elvis being labeled The King.

Director Eugene Jareki’s documentary has got hold of Elvis’ 1963 Rolls Royce and restored and driven it across America to explore how the country boy became the king whilst the US became less democratic. Its fittingly symbolic that the car frequently breaks down as a metaphor for modern day America. So as the car is driven across the USA sat on the back seat are many who knew him , admired him, disliked him or are just music fans and take the opportunity to perform songs on the back seat including the presumably ironically named Handsome family who frankly would not look amiss in a photo above the fire place to keep the kids away from the fire.

As a documentary its portrayal of Elvis’ rise and fall fits in with the US’s fall from grace with Alec Baldwin confidently predicting that, ‘Trump’s not going to win’. There are several famous faces in this some who would be well qualified to comment (Emmylou Harris,) others with a chip on their shoulder (one obscure rap singer pontificates and then demonstrates why he remains unheard of when we see him rap) and others who are just odd choices (Ashton Kutcher) and Mike Myers who’s been off screen for years now  since The Love Guru crashed and burned. In the 10 years that that was made he seems to have spent the time eating as he now looks like a coach driver who breeds staffy dogs in his spare time.

There’s little in the King biopic that we don’t already know but his career trajectory was huge but was wasted when he made  ropey films for 10 years  and by the time the Beatles were on the scene he was a relic and he knew it. His agent the fake Colonel Parker had never let him play outside the US primarily because of his agents own dodgy immigration status and his fear that he’d never get back into the US. So with Elvis keen to get back into resurrecting his career as a singer it was his 1968 comeback special (although he never thought of it as a comeback believing that he’d never really been away) that propelled him back into the public’s consciousness. Here again was an impossibly handsome, lithe in leather, singer doing what he did best and showing what true star appeal was and putting today’s bunch of X factor warbling wastrels and feckless tosspots  firmly in their place back flipping burgers from where they came. But what’s also a puzzle which is never answered is quite why impersonators have chosen to copy his Vegas years, bloated in a white jump suit that made him look like an over filled milk carton.

The comparison  of the rise and fall of Elvis with the US is apt and is brilliantly illustrated in the end montage as it flits between his death and the rise of the Reagan era through the Eighties to 9/ll. From this documentary even though Elvis was the king he always took the easy option showing that, much like the US,  all heroes are vulnerable.