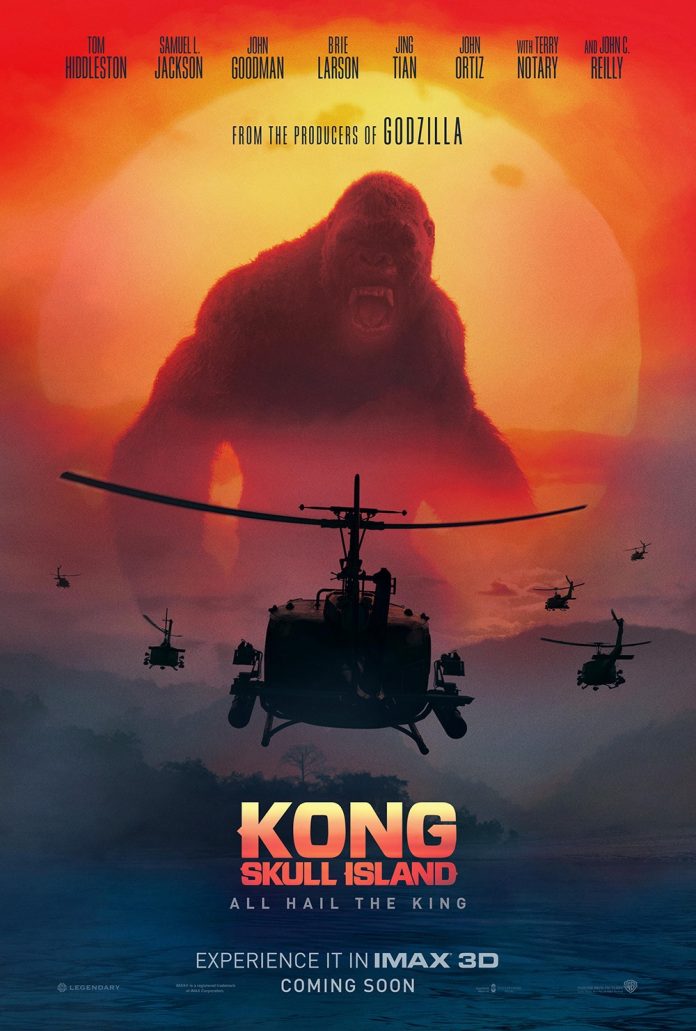 King Kong shares much with Cinderella and Sherlock Holmes.  It’s not obviously apparent but it’s that theirs are some of the most filmed stories over the past 100 years or so in cinema. Albeit Kong’s first incarnation was in the classic 1933 version which spawned a number of terrible spin offs including ‘King Kong Lives’, ‘King Kong Escapes’ and King Kong vs King Dong…….alright we made that last one up.  So the 2017 version unlike the 1976 and 2005 version ploughs its own path as an origin story and begins back in 1944 with an aerial dog fight between a US and Japanese pilot with both crashing on a remote island and continues their fight hand to hand only to find a much bigger pair of hands interjecting.

The film cleverly uses newsreel footage to fast forward through the decades to 1973 and the end of the Vietnam era where John Goodman & Corey Hawkins, a pair of opportunistic explorers persuade a government minister to fund an expedition to a previously undiscovered island. The concept of on undiscovered island is a barely credible concept these days but perhaps that’s why this is set in 1973 where, in the early era of satellites, the island could remain hidden by a continual haze of storm and heavy cloud cover. With ex-SAS tracker Tom Hiddleston and a typically uptight English accent they are joined by Samuel L Jackson’s typically jive talking, no messin’, helicopter troop leader and along with a group of scientists they all make their way to the island. It’s a breezy first act as they go about dropping depth bombs on the island terrifying the wildlife and director Jordan Vogt Roberts’s seems to be channelling his inner Terence Malick in its portrayal of Bombs v Wildlife as they scamper away in fear of their lives before they’re decimated.  It’s here that Goodman’s underhand manipulation comes to play as the bombs stir Kong (as well as some skullcreeper monsters from underground) and that iconic moment from the trailer where Kong appears against the sunset as the choppers hone in on him. It’s a brilliantly executed sequence playing like the climatic end of the classic story as Kong battles the aircraft only this time winning and the crews are separated.  So while the survivors are split up with most of the military men regrouping Jackson is out for revenge against the giant ape. Hiddleston along with Brie Larsson as the anti war photographer and obligatory female presence bump into the enjoyably loopy John C Reilly as the US pilot who crash landed on the island and now lives among the natives. He’s also there for a bit of exposition namely that Kong keeps the eco balance on the island as below the ground live hideous skull crawlers  with the big mama monster staying underground so you can imagine what this is all heading.

After working on low budget indie films Jordan Vogt Roberts has grabbed his moment here and orchestrates the monster moments with Kong, inflated to massive proportions, in the beautifully shot Vietnam locations which should do wonders for their tourism industry. Roberts is determined to establish its 1973 setting and there are constant close up of items from the era so we have slide projectors, photographic film cameras , repeated shots of a wobbly headed Nixon on the helicopter dashboard but especially 33rpm vinyl records playing songs of the seventies. And the music he’s put together for the sound track is great including Bowie, Creedance  Clearwater Revival and notably Black Sabbath’s Paranoid which thrillingly accompanies the first sighting of Kong by the expedition crew.

The film does suffer from a saggy middle section despite the monster mayhem where the humans are there to be gobbled up, stamped on or eviscerated. Hiddleston looks suitably heroic but its Jackson who comfortably steals his scenes as he seems to do with consummate ease in whatever he appears in these days. Reilly is good and Brie Larsson, who is more used to small indie films, is here as eye candy and once again Toby Kebbell, who is a magnificent actor is again reduced to a largely forgettable role unfortunately.

As spectacle it succeeds but there’s little empathy to be had with Kong as there was in the original film with him being portrayed as a one ape wrecking machine and despite the nuance that CGI is capable of it’s still doesn’t inspire the empathy that the 1933 stop motion ape had. But that’s not take away from Terry Notary whose motion capture performance gives the ape a sense of swaggering supremacy as king of all he surveys.

This is part of a hoped for classic monster franchise which will culminate in a face off with Godzilla in 2020 and to that end it’s advisable that you stay all the way through the credits to the compulsory post credits scene. For once it’s worth it.