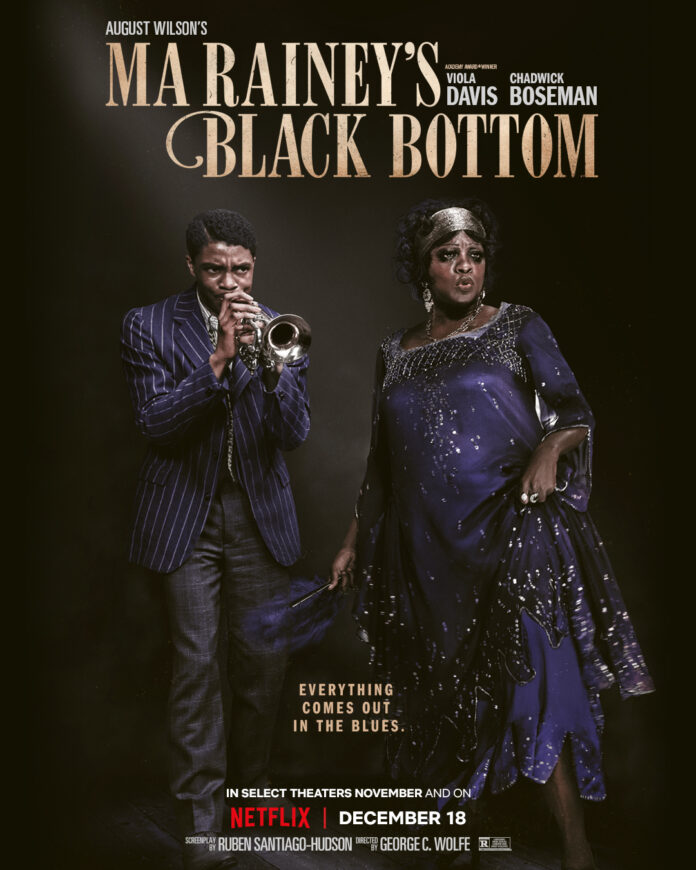 Despite a title that suggests a porn film by the BLM movement Ma Rainey’s Black Bottom focuses on the famed 1920’s ‘Mother of the Blues’ with Viola Davis in the title role. The black bottom in question being a dance from African-American music from the same era as well as a song made famous by the singer herself. The film centres around a recording session the singer made with four backing musicians that included a talented, ambitious and perhaps over confident horn player Levee (the late Chadwick Boseman in his last role). With Ma Rainey’s stardom secure she is in turn arrogant, egotistical and difficult to work with and it’s not long before she and Levee come to loggerheads as the session progresses over the course of the day.  It’s no easy task for her white manager and the studio manager trying their best to keep the peace and keep the recording session on track. 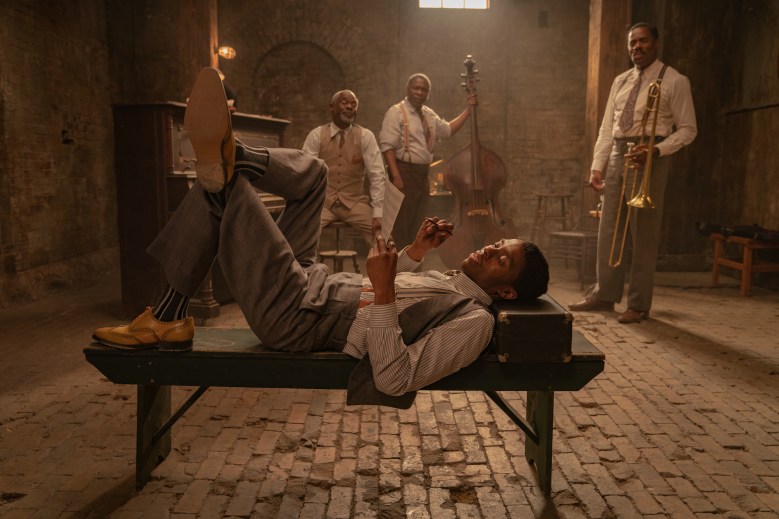 Things are already tense between Levee and the rest of the band as they wait for Ma to arrive with him trying to sell his songs to the studio and impress his own style and flair on the recordings which he is soon to find Ma simply will not entertain. It’s these early scenes with the band  that establishes Levee as having a certain swagger and his attitude and belief that he knows how to, ‘spook the white man’ as he recalls in one of two stand out speeches he makes – the first one detailing an attack on his mother he saw as a boy. The second major speech from Levee has him raging against God outraged and daring him to ‘turn your back on me!’.  At the time Boseman was in the final throws of a terminal cancer that he had kept quiet about but that would take his life and there’s a sense that this perceived feeling of rage about rejection has come from a deeply personal place in the actor.

Boseman’s performance is matched by Viola Davis as Ma Rainey whose appearance suggests she has yet to master driving over speed bumps whilst applying make-up. Sweaty, aggressive and demanding in her attitude to others especially the manager and the studio, she is only too aware that they are only interested in the profit they can make from her voice rather than in herself as a person. It’s this that gives her the confidence to make demands to both them and Levee that there’s the recording will be done one of two ways – her way or the highway and it makes Rainey a not especially likeable figure in what is a fictionalized account of the recording.

Adapted from Pulitzer prize winning August Wilson play suffers from the same staginess as the film adaptation of ‘Fences‘ a few years ago which again star Viola Davis which went on to win an Oscar for that film. Mainly confined to two rooms at the studio there is little cinematic here and this is far more a performers film rather than a directors.  Yet despite the film’s title it is Levee that the film focuses on more than Rainey’s musical legacy. The screenplay retains Wilson’s racial politics and the appropriation of African-American music for the profit of controlling white males. With its occasional biblical subtext Ma Rainey’s Black Bottom  at the same time suggests that the Devil has all the best tunes.