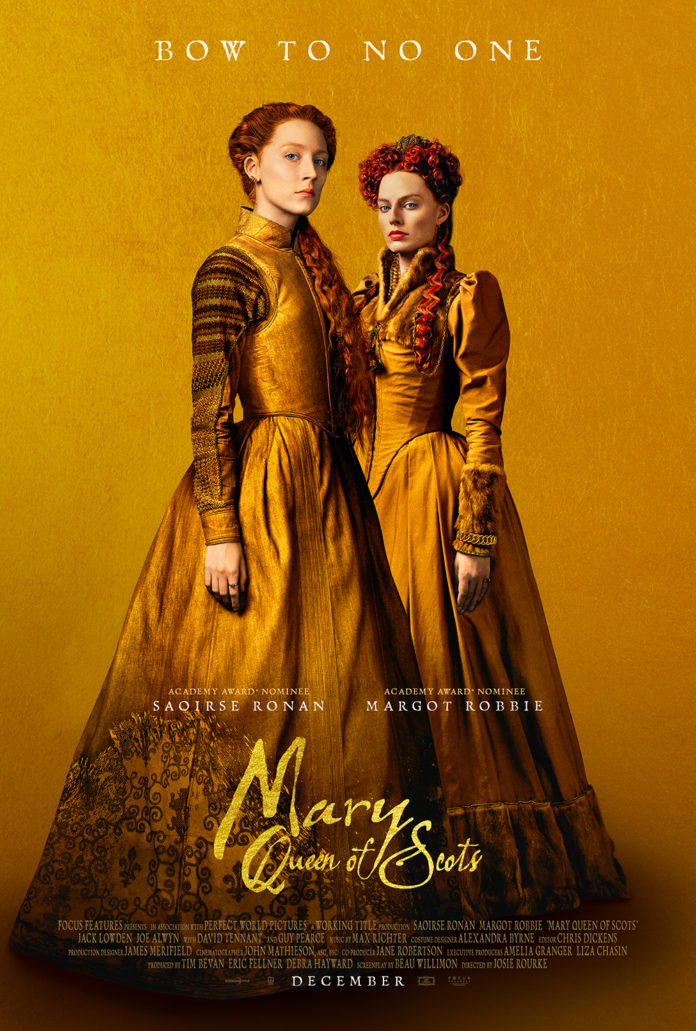 Unlike Nicola Sturgeon, wannabe Queen of Scotland and leader of the SNP, Mary Queen of Scots was Queen of France at 16 and widowed by the time she was 18 and was on her way back to Blighty having refused to remarry. Played by Saorise Ronan she is determinedly single mind much like Nicola Sturgeon except Sturgeon has the look of Miss Jean Brodie tightly buttoned up as though trying to contain her from having a psychotic episode. For Mary her return to Scotland meant she could rightly claim her throne only to find that Scotland also fell under the rule of Queen Elizabeth.

Mary Queen of Scots determines to be more than just a figurehead monarch of Scotland and what follows is a power play between the two women with Elizabeth’s sovereignty threatened and Mary finds herself fighting off a series of betrayal’s and conspiracies against her. With two female leads and directed by Josie Rourke in her feature film debut this is a welcome addition to female led films and in that respect is not dissimilar to The Favourite with two great performances more so by Ronan with Margot Robbie playing second fiddle. In fact though the film focuses on the battle for the throne between the two the pair only have one scene together much akin to that between Pacino and DeNiro in Heat except for one of the women it will end catastrophically which will be no secret to those up on their history. It’s a great little scene with its only failure being that in actuality it never happened.

Ronan and Robbie, both Oscar nominated actresses, have an extremely impressive body of work to which they can now add Mary Queen of Scots. Ronan is great, frustrated at her attempts to over throw Elizabeth but it’s the transformation of Robbie making her almost unrecognizable by the end. Here Robbie wears a ginger wig perched on her half shaved scalp with her head painted a thick deathly white cracked foundation and is in keeping with the fashion at the time. Ginger haired and white faced Elizabeth looks like she could get skin cancer just by opening a holiday brochure.  There’s a decent supporting cast to with Simon Russell Beale, Guy Pearce. Ian Hart, Gemma Chan & Adrian Lester. David Tennant too appears as a rabble rousing John Knox though frankly he brandishes so much facial hair that he looks like Hagrid’s younger, thinner brother.

The politics of the film are engrossing showing that the behind the scenes machinations were as treacherous then as they are now except the worst that Theresa May can expect when she gets ousted is a gold plated pension, a position on the board of some multi-national and being interviewed by Piers Morgan.

Here’s the trailer for Mary Queen of Scots………