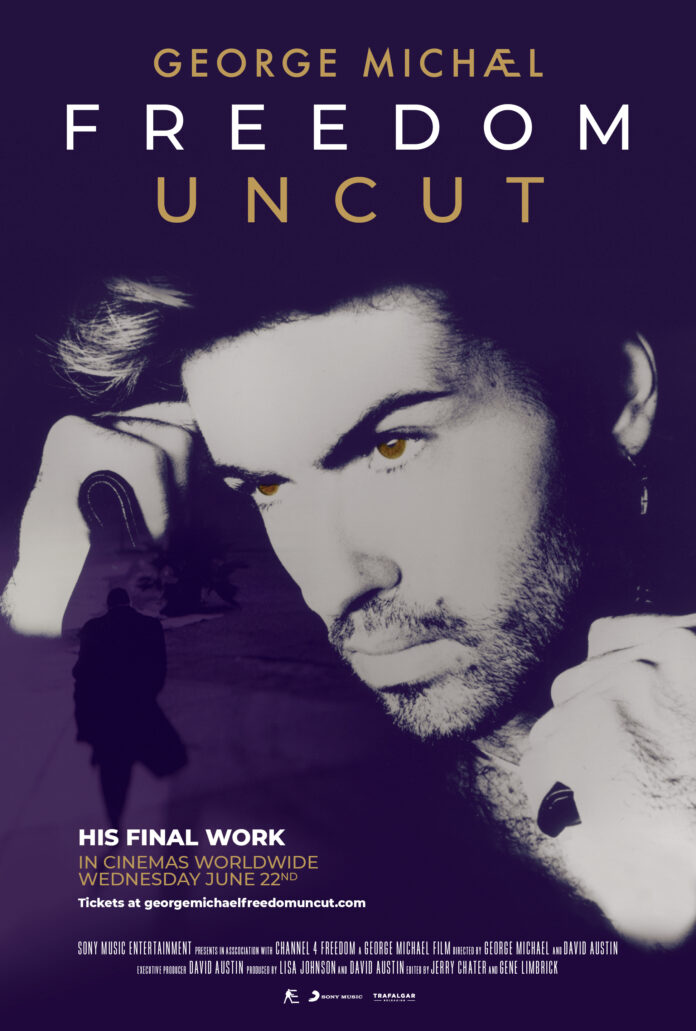 George Michael proved to be one the UK’s great song writers taking his inspiration from a number of influences in the most unlikely circumstances notably when he tripped over a chocolate bar and thus giving us his No 1 hit, Careless Wispa (‘You’re fired! – Ed). George Michael Freedom Uncut is the last work that the singer – songwriter worked on before his tragic death on Christmas Day 2016 aged only 53 and in that respect this documentary is part of his legacy with his own memories and feelings which, right from the start, he states just how lonely and unhappy he felt on the last night of a solo tour. Clearly a troubled man with his own demons the documentary posthumously takes a look back at his career with contributions from a number of high profile and respected artists ……and James Corden.

So whilst the contributors are as varied as Ricky Gervais, Tracy Emin, Stevie Wonder and Liam Gallagher it’s George Michael who provides first hand insight and he’s forthright about the downs of his career which included his unsuccessful legal action against Sony , the backlash from black artists about his Listen Without Prejudice album and his refusal to promote that record not even agreeing to have his picture on the sleeve and the tragic death of his first boyfriend after he came out. It’s especially poignant when he sings Somebody to Love at the Freddie Mercury tribute concert knowing that his boyfriend was dying having contracted HIV. But there’s also a number of career highlights with the contributors praising many of his songs as they listen to them being played on the vinyl that they were originally released. And it’s a reminder of just how great many of his songs were with the Faith intro being an earworm whilst the Praying for Time intro is mammoth. There’s no doubting also that his videos’ for his classic hits remain both iconic and influential perhaps none more so than the David Fincher directed video for Freedom with an array of the world’s top supermodels that included Naomi Campbell who still looks stunning and Linda Evangelista who these days appears more supertanker than supermodel having been indulging in disastrous cosmetic treatments.

George Michael has a co-director credit on the Freedom Uncut documentary and when he has included so many respected musicians singing his praises it does smack a little of narcissistic vanity but in fairness he is quite open about his ego and living in sunglasses even when performing in stadiums at night. The most noticeable omission contributor wise is that of Andrew Ridgely who is nowhere to be seen and whose input would have seemed essential. Equally there is little mention of his brushes with the law and drug use which he had admitted on TV’s The South Bank Show.

George Michael Freedom Uncut acts as both a testament to a great artist but also as a warning to be careful what you wish for – something that Michael acknowledges he had striven for only to find it was lonely at the top for most of his career as a downside to his international success and is both an uplifting yet heartbreaking insight into an icon.