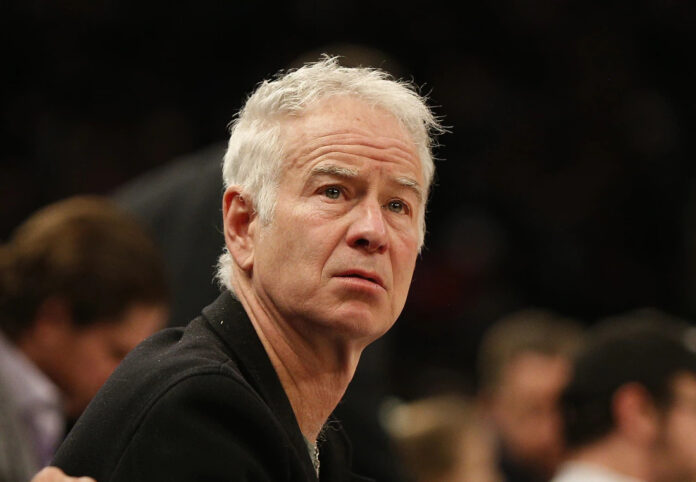 John’s McEnroe’s infamous outburst, ‘You cannot be serious!’ is probably most people’s reaction when learning of the latest adulterous philandering by Boris Johnson though perhaps, ‘New balls please!’ might be more appropriate for a man with more than a passing resemblance to an unmade bed, a head injury and a burst pouch of yoghurt drink. But McEnroe was both a legend and something of an enfant terrible surpassing the bad boys of tennis who at that point had included Jimmy Connors, Vitas Gerulaitis and Ilie Nastase who are now largely forgotten.

McEnroe was loud, brash and outspoken, an almost complete antithesis to Bjorn Borg the ice cool Swede who won Wimbledon for five consecutive years and was something of a nemesis to his American counterpart. This documentary about McEnroe has the tennis player now in his sixties and talking openly about his notorious past both on court and in the full glare of the media as well as his private life and with a single minded strong willed father pushing him ever harder followed by a disastrous marriage to Tatum O Neal herself no stranger to her own demons.

Director Barney Douglas has persuaded McEnroe to talk quite openly about his past issues and can’t have been easy for the player when the British press especially revelled in his foul mouthed fury and the footage of his outbursts are legion behaving like a truculent child on court and earning himself the moniker, Superbrat. All of his ire and anger is in compete contrast to his opponent, and now long-time friend Borg who is one of the contributors here and reveals that he too realised that it was a pressure cooker environment he worked in and knew that he could not carry on like this and at 26 years of age retired. In contrast it was in 1992 aged 33 that McEnroe finally retired with his world rating having dropped out of the top ten and with controversy having followed him throughout his career including accusations of drug usage which he openly talks about here.

Foe such a tempestuous career with notable moments forever captured by the media McEnroe is open about his shortcomings that tainted his undoubted talent that ultimately led to something of a meltdown that wrecked him and his career as well as his marriage to Tatum O Neal openly admitting that, ‘I don’t think infidelity helps!’. There are a number of significant contributors notably from Borg whereas McEnroe’s late father is restricted to contributions from archive footage and perhaps notable omissions are those of Tatum O Neil (his current wife Patty Smyth willingly talks about her husband and he himself admits that she’s been a calming influence on him over the years since they married in 1997).  And though he is open about his therapy and the endless psychiatrists he has seen what is most telling is his five, now adult, children speaking about his behaviour and its effect on them.

This sports documentary alternates with him sat in a darkened room talking candidly about his behaviour interspersed with him walking around New York at night until the dawn like some sort of epiphany that his talking and self-analysis has bought about. A talented sportsman who battled and still does battle his demons privately and it’s a fitting track that plays over the end credits with Public Image Ltd’s John Lydon singing, ‘Two sides to every story , somebody had to stop me, I’m not the same as when I began’

Here’s our interview with director Barney Douglas about working with McEnroe…..