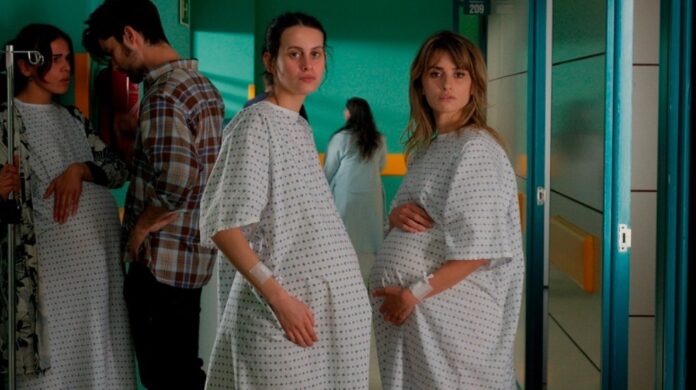 With our Editor’s distinct lack of knowledge of medical matters on even the simplest level he only has himself to blame when the result of a test came back as showing him 3 months pregnant having mixed up his wife’s pregnancy test kit with a lateral flow kit. Parallel Mothers also deals with test results but with devastating consequences.

Pedro Almodovar’s film can be gloriously camp but his recent films Pain & Glory have taken a harder edge and his latest film, Parallel Lines,  has taken in tragic political history with Janis (Penelope Cruz), a respected photographer, asking  a forensic archaeologist to get the authority to exhume  her great grandfather’s body from a presumed mass grave outside a village. That the married archaeologist is further persuaded when they becomes her lover also helps although when she becomes pregnant by him it brings the films  themes of birth love & death full circle.

But like Janis, teenager Ana (Milena Smit) is also going to be a single mother and the pair strike up an immediate bond when they share a ward with both giving birth on the same day.  Both go their separate ways  as they raise their baby’s and reignite their friendship after a tumultuous occurrence in their respective lives. It’s not difficult to see where this is all heading when Janis finally reveals a secret to Ana that she been keeping from her for some while. Parallel Mothers veers perilously close to soap opera but is saved by Cruz & Smit in grounded performances in a believable reality with great support from Almodovar favourite Rossy de Palma (increasingly looking like she’s come off the set of RuPaul’s Drag Race)and Aitian Sanchez Gijon as the self absorbed mother of Ana more interested in her career as an actress taking off than being a supportive mother to her daughter