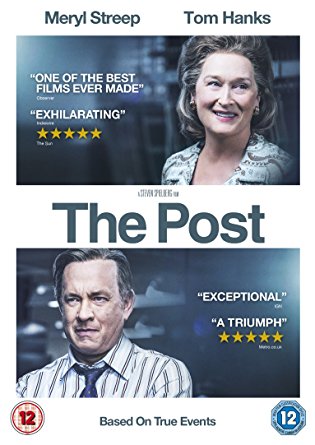 Both the Vietnam war and President Richard Nixon’s Watergate affair were a gift to film makers and Steven Spielberg’s The Post takes in both, albeit only briefly with Watergate.  But whereas Watergate took down one President, the cover up that’s uncovered in the The Post spanned four Presidents from Eisenhower& JFK to Johnson & Nixon. There’s been a whole bunch of journalists exposes that have battled suppression with ‘All the Presidents Men’ being the Granddaddy of them all and the recent best Oscar winner ‘Spotlight’ being a more recent one.

The Post has Meryl Streep as Kay Graham, the first female newspaper publisher largely derided, due to having inherited the newspaper after the death of her husband, to being a female amongst the he-men hard bitten hacks but along with her Editor Ben Bradlee (Tom Hanks – ‘Sully‘) she finds herself embroiled in a battle to publish a bombshell of a story against the might of a government determined to keep the Vietnam expose suppressed. There’s everything to play for as Kay Graham’s reputation risks being irreparably damaged if she bows to government bully boy demands but equally she risks the paper being sued to oblivion and forced to close down if she does publish.

Streep was once again Oscar nominated as Best Actress along with her 7,068,4029 other Oscars but there are two pivotal moments in the film both almost wordless. The first is at a meeting where, having been advised what to say to potential investors, she loses her bottle and fluffs her well rehearsed lines. It’s the look on her face as she realises she’s missed her moment and her disappointment with herself is writ large on her face.

The second is the films pivotal moment where, standing alone in her office on the telephone, Bradlee asks for decision to print the story. In the words of yoghurt selling, East End warbler Martine McCutcheon, ‘This is my moment. This is my perfect moment’ although we’re pretty sure that those lyrics were never going through Graham’s mind but again its testament to Streep as an actress that her doubt and quandary is all over her face. 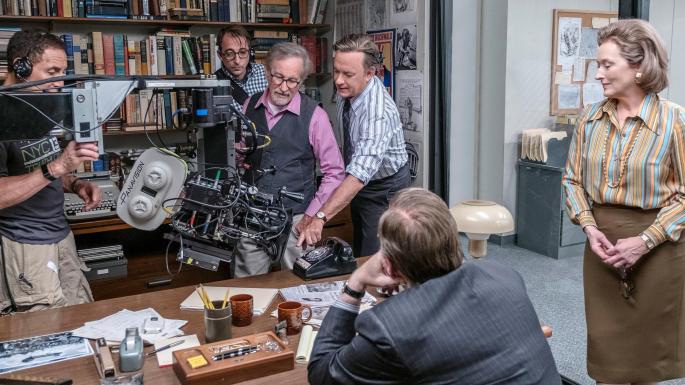 The Post embraces the old school newsroom with its expansive offices noisy with the tapping of typewriters as journalists with a cigarette hanging from the corner of their mouths hammered out their stories and is a world away from modern journalism. It’s a frisson of excitement that contemporary stories with PC screens can’t touch. Set in 1971 The Post is pure old school storytelling with no flashy CGI to distract and though the outcome is well known it Spielberg’s command of a compelling story that drives the film with his two leads and a superb supporting cast that includes Bob Odenkirk, Tracy Letts (so good in ‘Indignation’), as well as our own Matthew Rhys.

Back in 1993 Spielberg delivered a double whammy – his Oscar winning masterpiece ‘Schindler’s List’ and his box office blockbuster ‘Jurassic Park’. It was a remarkable achievement for one year. ‘The Post’ was his heavy weight 2018 Oscar contender that he made whilst all the CGI effects were put together for ‘Ready Player One’. Again both were no easy undertaking but The Post earned only two Oscar nominations for Streep and also as Best Film with neither winning and Ready Player One earning a healthy $567m worldwide , just over half of JP’s $1.029 billion.

It’s a decent disc cleverly laid out as a newspaper supplement with the extras labled as Layout, Editorial, Style and Arts & Entertainment but as has been with all of Spielberg’s disc there is once again no directors commentary. Its Layout and Style features which are the best of the extras with featurettes about recreating the sets and print presses of old as well as clips of the real life Kay Graham & Ben Bradlee. Editorial is a bit of a back slapping love-in with all expressing how it was just so great to work with blah blah blah and Art & Entertainment being a very brief piece on the music for the film by 86 year old composer John Williams who seems to have provided the score for every major blockbuster since Jaws and shows no sign of letting up just yet. If anything the BTS featurettes are of interest for seeing Spielberg seemingly abandoning his baseball cap uniform for a variety of waistcoats.

If you prefer Spielberg’s drama’s to his blockbusters then The Post is for you.