Everyone dreaded their school report none more so than our Editor whose Head of Year wrote that, ‘he sets himself low targets which he continually fails to achieve’. As far as our staff writers are concerned he’s a witless drunk without the brains he was born with …..which ironically was the Headmasters comment. (‘You’re fired!’- Ed). The Report here is one that an idealistic but wholly dedicated US government staffer played by Adam Driver is tasked to lead into the post 9/11 detention and interrogation programme.  A programme that only really came to light because of the use of waterboarding. However that was only part of a larger set of sensory deprivation techniques developed by a pair of psychologists claiming that it would succeed in extracting vital information from terrorist suspects in the West’s war on terror. These techniques involved sleep deprivation, non-stop blaring music, and humiliation all developed from the psychologist having gone out on a Friday night with our Editor (‘You’re definitely fired!’ – Ed). 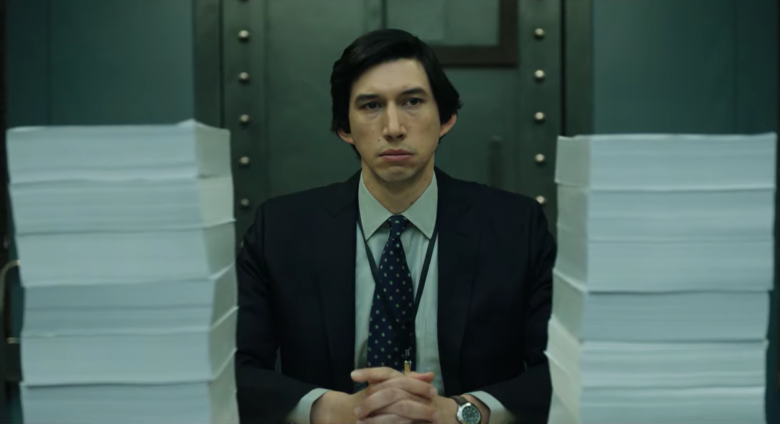 In retrospect it’s hard to see how these techniques were ever endorsed and approved as it’s obvious that a suspect will admit to anything to get it to stop. It’s Driver as lead investigator Daniel Jones working for Senator Feinstein (Annete Benning) who soon starts uncovering the shocking truth with the CIA and FBI doing their best to obfuscate and deny any access to ever more contentious information from becoming public knowledge and soon he finds he’s waging a one man war as senators start to back away from his research which becomes all consuming taking over Jones life for years.

Written and directed by Scott Z Burns whose screenplays have included ‘The Bourne Ultimatum’ as a well as several of Steven Soderburgh’s films and this is utterly absorbing true story with a whole load of detail that you can’t really afford to let go of your concentration. Driver is now uniformly turning in great performances and this is another despite him spending much of his role confined to what he believes is a highly secure room or raging at senators or CIA about what they’re failing to see through to the end.

The Report is shocking but hardly unsurprising as to what governments do in the name of the people and perhaps the biggest is shock is that the discredited techniques earned the psychologists responsible an astonishing $80m in fees. The Report is compelling viewing which will prompt justifiable outrage in audiences.