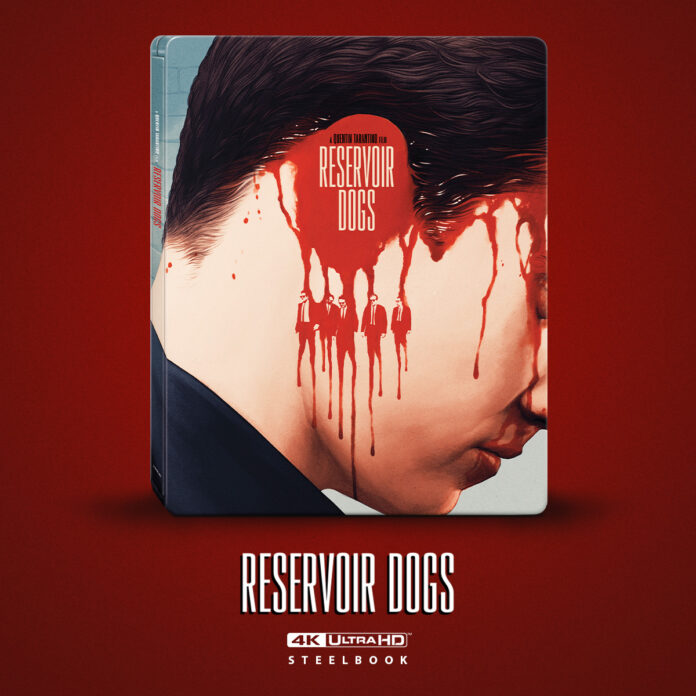 Up there with the greatest of feature film directing debuts is undoubtedly Reservoir Dogs by a film geek who had gained an extensive film knowledge from working in a video store years before streaming had even been invented. Tarantino’s story of a jewellery store heist gone awry due to a police informant in their ranks was, as one critic calls it, a clarion call’ by its young writer director Quentin Tarantino. Released in 1992 it was and remains a bravura piece of film making creating a new idiom in film for a rising generation of new film makers that Tarantino would head.

Released as a limited edition 4K UHD & blu-ray steelbook Reservoir Dogs remains as compelling as it was on its release 30 years ago and contains all the hallmarks and signature of a writer-director would hugely influence others and would be emulated yet rarely getting ever close to achieving the films greatness. In the first five minutes alone there is Tarantino’s at the time trademarks – riffing on pop culture (n here’s it’s the meaning of Madonna’s Like a Virgin), the cool imagery (here’s it’s the suits & shades and of course the use of great music on the soundtrack. This was a slick and engaging tale running a taut 99 minutes and as critic Mark Kermode has rightly pointed out since then his later films have got longer and increasingly in need of a firm script editor.

Who missed their audition for Reservoir Dogs?

This newly packaged version of Reservoir Dogs comes with a limited number of bonus features including four deleted scenes with two angles of the infamous ear cutting sequence which is seen in graphic detail here and the film certainly benefitted from the scenes being cut as they add little but are of undoubted interest nonetheless for fans of his dialogue. Alongside this is two featurettes – Playing Fast and Loose a short analysis of the film from an AFI representative as well as a University script lecturer who make valid points and then there’s also Harry Knowles the ex-head geek of Aint-It-Cool website looking like an anaemic beach ball with a pubic ginger beard and potty mouthed with excitement that adds little insight. The third bonus feature is ‘Profiling the Reservoir Dogs’ which is quite a fun piece which runs a brief back story of each character – Mr Brown is a nobody and the lowest rung of criminal etc. But it’s a disappointing set of bonus features which have been taken from the acclaimed 2008 two disc collector’s edition of the film whose case was a petrol can as used by Mr Blonde but the real appeal of this release is the 4K UHD transfer.