Our first thoughts when we  first received news about The Ring Master was that it must have been from a catalogue order firm referring to our Editor’s specialist interest film collection (‘You’re fired!’ – Ed). Instead The Ring Master is a Danish horror film based on a novel with two women who work at a late petrol station finding their night shift taking an extremely sinister turn. Played by Anne Bergfeld and Karin Michelson, two attractive actresses who will conform to the standard  ‘damsel in distress’ mode demanded by horror films which some might take issue with because normally it would be a disillusioned Asian male working the late shift staring at a giggling student mashed on gak and trying to buy 17 mars bars. It’s the night of a major international football final in which Denmark are playing so straight away you know you’re in a world of fantasy but mature student Agnes (Bergfeld) is dropped off at her father’s petrol station by her doctor boyfriend to work one last shift as she finishes her dissertation as she works alongside Belinda (Michelson). It’s a quiet night as the nation is watching Demark in the football final and there’s little traffic with only a few customers filling up  – a pair of irritating oddballs and an even odder guy who keeps repeating Agnes name – but in he’s odd in our books primarily because he’s got a dilapidated caravan something we’ve never understood why anyone would be dragging their living room in a box on wheels and clogging up the motorways  but we digress.  There’s a series of events that put both the women on edge frequently leaving the safety of the store to go out and investigate leaving you shouting, ‘Stay inside and lock the doors!’. And whereas the film swerves the popular trope, ‘the mobile phone that doesn’t work when you need it to‘, it does instead have the implausible inability to access the garage CCTV and is a lazy excuse to keep us all in the dark.

Bit by bit director Soren Juul Petersen ratchets up the tension towards something unthinkable that’s about to happen to the pair of them and this is extremely well done as there’s a terrible sense of foreboding as to what’s coming their way.  Unfortunately the tension is completely undermined  because right from the start we see one of the girls locked in a confined space out of her mind with fear and as the film nudges towards what might happen it leaps forward to find the women in a sort of circus ring with The Ringmaster about to perpetrate all manner of atrocities on them and in that way this is hugely influenced by Hostel and to a lesser degree Saw.  This leaping back and fore in the films narrative fatally undercuts the tension much as it did with Clint Eastwood’s, ‘The 15:17 to Paris’ and serves no useful purpose and it’s a great shame as leaps in narrative feels a bit like the film reels are playing out of order. 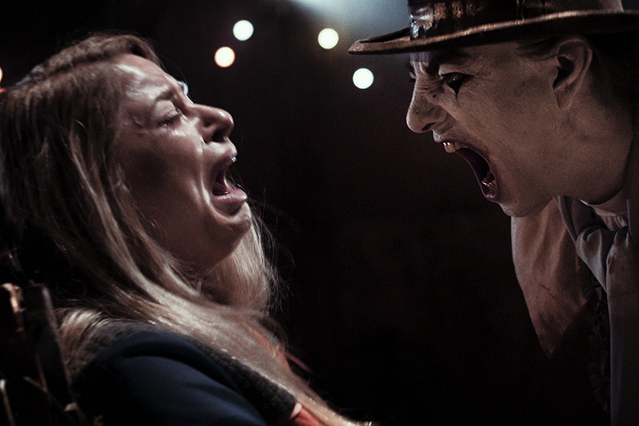 Like the recent blu-ray release of Circus of Horrors this plays with the idea that as audience we are enjoying the horror as we watch a live streaming audience enjoying horror and cleverly suggests that extreme violence has gone  on for thousands of years referencing  paintings of gladiators in a Colosseum pandering to the  baying crowd. Certainly the attraction of car crash TV continues today which might explain any interview by Richard Madeley. The Ring Master is an effective thriller undermined by not keeping its narrative running in linear fashion before the horror kicks in.