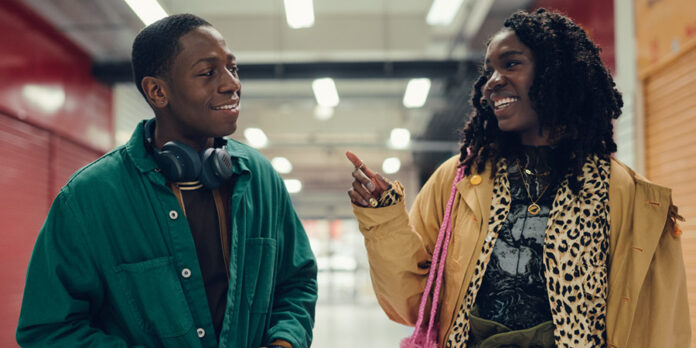 We have all had our break ups none more so than our Editor before he finally got someone to marry him. Goodness only knows it was not for want of trying and he ended up with whiplash from the number of times he had been left swiped on tindr (You’re fired!- Ed). Anyway landing in our inbox is the Rye Lane trailer a quirky looking film with a lead character reeling from being dumped.

How Joanna Scanlon learnt to speak Urdu for, ‘After Love’

Based in South London the trailer has an authentic looking sense of location  and is from breakout director Raine Allen-Miller, is the RYE LANE trailer,  a romantic comedy that stars Vivian Oparah (Class, The Rebel) and David Jonsson (Industry, Deep State), as Yas and Dom, two twenty-somethings both reeling from bad break-ups, who connect over the course of an eventful day in South London – helping each other deal with their nightmare exes, and potentially restoring their faith in romance. From what we see from the trailer this certainly has an individual style

Searchlight Pictures, BBC Film, and BFI present RYE LANE, a DJ Films and Turnover Films production. Written by Nathan Bryon and Tom Melia, and directed by Raine Allen-Miller, the film is produced by Yvonne Ibazebo and Damian Jones.  Olan Collardy is the director of photography, Victoria Boydell is the editor, Anna Rhodes is the production designer, with costume design by Cynthia Lawrence-John, hair and make-up by Bianca Simone Scott, and an original score by Kwes. The film was developed with the assistance of BBC Film, and funded by Searchlight Pictures, BBC Film and the BFI (awarding National Lottery funding). Executive Producers are Eva Yates and Rose Garnett for BBC Films, Kristin Irving for the BFI, Sophie Meyer, Paul Grindey and Charles Moore.