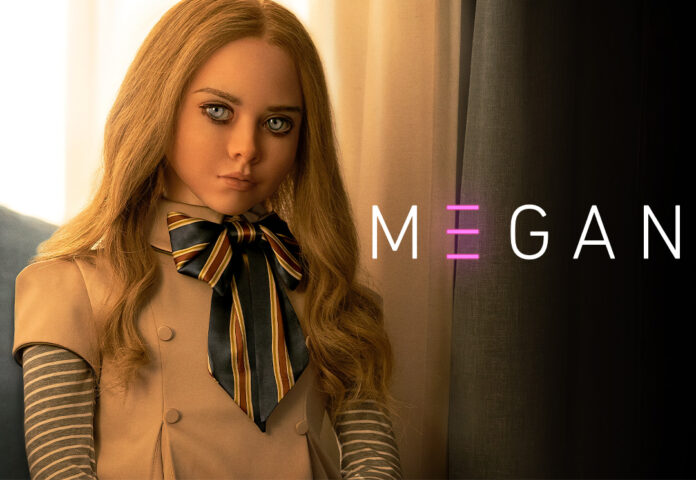 Killer robot movies have nearly always been a crowd pleaser and M3GAN is no different especially with James Wan on producing detail. Here he provides the story for Gerard Johnstone to direct where M3GAN is an acronym for Model 3 Generative Android, a blank eyed, botox faced emotionless robot that it’s a surprise Amanda Holden wasn’t cast in the role. She a prototype that’s been built by engineer Gemma (Allison Williams looking like Courtney Cox younger sister) unbeknown to her boss David (Ronny Chieng) who wants to see it shut down.

How they made the M3GAN doll

But this soon changes due to Gemma becoming carer for her niece Cady (Violet McGraw) orphaned by a car crash. Alone in a new city friendless and devastated by the loss of her parents its Gemma who sees the opportunity to provide her with a pal in the form of M3GAN – there’s also an ulterior motive in that the android doll needs to learn various human traits and speech pattern that she can only do if synched up with an owner which in this case is Cady. What could go wrong? Well nothing initially and its David who soon sees the opportunity for the company to market the doll for $10,000 a piece. In his books sci-fi writer Isaac Asimov had written three rules for robots the first of which was that a robot may not injure a human being however here its slightly amended for the doll to  protect its owner from emotional and physical harm – an edict which has clearly not been adhered to by a Ms M. Markle but M3GAN takes it to extremes so you know that any ‘villain’ in the film is unlikely to come out of it well and that includes the neighbour’s dog.

M3GAN owes much to those robots run amok films that have come before and there are nods to Child’s Play, Terminator and Westworld. Ultimately disposable but enjoyable popcorn horror this is gloriously demented fun

Watch M3GAn introduce the film at the London premiere ….