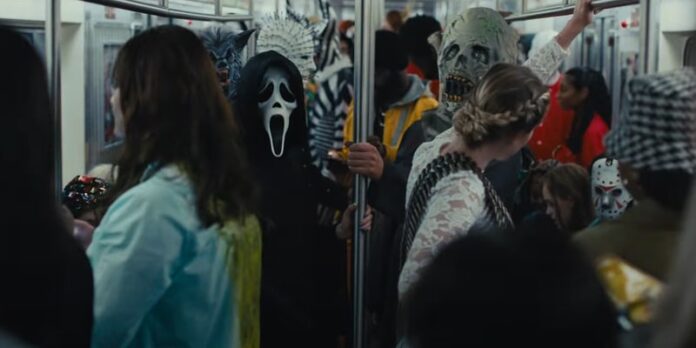 After the success of Scream 5, or Scream as it was actually titled ( we would have liked to see it called 5CREAM but what do we know) which earned an impressive $140m the slaughter will continue with the release of the Scream VI trailer franchise.

The story behind the making of Scream 5

The Scream 5 cast reveal what went on behind the scenes

This sixth entry in the teenage stab-a-thon  is again directed by Matt Bettinelli-Olpin & Tyler Gillett and written by  James Vanderbilt & Guy Busick. This will be the first film without Neve Campbell in the lead role after a pay dispute with only Courtney Cox the lone surviving cast member who has been in all the films to date.

Melissa Barrera has told press that this one is going to be an altogether gorier affair and in fairness the trailer certainly points in that direction. From what we can see here it seems to be based at Halloween time and a sequence on a subway train looks particularly good set piece akin to that in Joker. Original scribe Kevin Williamson said,  “It doesn’t feel like ‘Part 6′ it feels like you’re watching this big, huge, fresh reinvention. I love it. I’ve watched the movie with a big smile on my face…… And going to New York was awesome…..  it feels like a new movie!’.