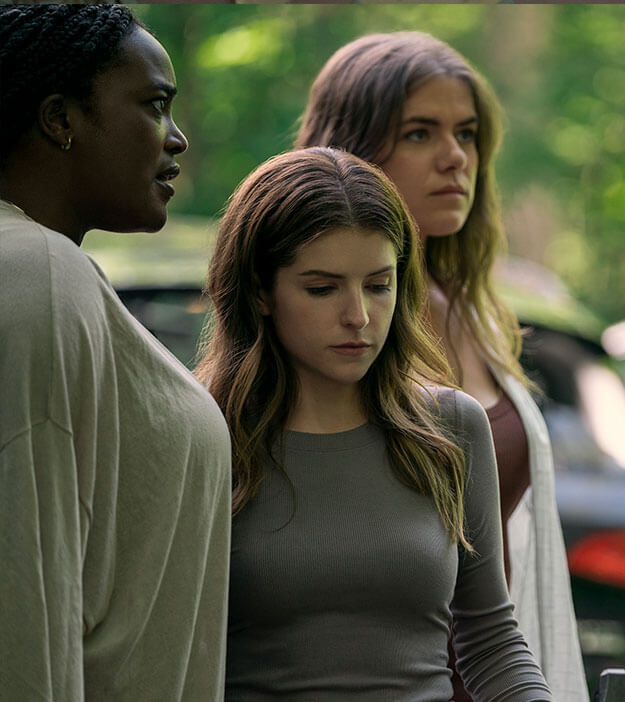 How our Editor ever got married to such a beautiful sensitive funny woman as his wife is anyone’s guess although our guess is chloroform (‘You’re fired!’ – Ed). The domestic violence themed film has been covered before with A-lister Julia Roberts starrer Sleeping with the Enemy to TV dramas such as 1996’s Trip Trap with Kevin Whately. But criminal legislation has changed, at least in the UK, where coercive and controlling behaviour is now an offence and it’s that which Anna Kendrick finds herself as a victim in ‘Alice, Darling’.

Actress Terri Dwyer chats about her new film, ‘The Stranger in our Bed’

From the start when she goes for a night out with her two best friends Sophie (Wunmi Mosaku) and Tess (Kaniehtiio Horn) but is immediately distracted by texts from her artist boyfriend Simon (Charlie Carrick) and its an early indicator that something is not quite right. Quite what that is, is not laid out for us initially but when Alice has to tell him she’s going on a business meeting rather than a celebratory birthday break with her friends it starts to occur to Sophie & Tess that her relationship is not what it might seem. Pulling clumps of her hair out, making excuses that she needs to leave and confronting her friends over nothing, they soon start to understand that Alice is a bundle of anxiety and nerves.

Kendrick is best known for her light comedy roles in films like Pitch Perfect which perhaps has overshadowed the matter of her Oscar nomination for the 2009 drama ‘Up in the air’ and her role in Alice Darling is a concerted effort to return to her dramatic roots and highly effective it is too in a role that she has gone on record to say was based on an experience with a previous boyfriend. The story is something of a slow burn not giving away immediately what has been going on in Alice and Simon’s relationships and instead director Mary Nighy gives us glimpses of their backstory and her friends finally understand what’s been going on with their friend when Simon eventually does turn up to check all is OK having wheedled out of Alice where she actually is staying.

This is Mary Nighy’s debut feature as a director and it is impressive with great performances and raw emotion marred only by a secondary story about a missing girl at the town where they are staying which is entirely superfluous and could have been easily dropped without any detriment to the film. There’s also a denouement which is a little too convenient a conclusion but the script has enough insight that gives Alice Darling a lo-fi edge over similarly themed films.

Director Mary Nighy spoke to James King about the making of the film…..