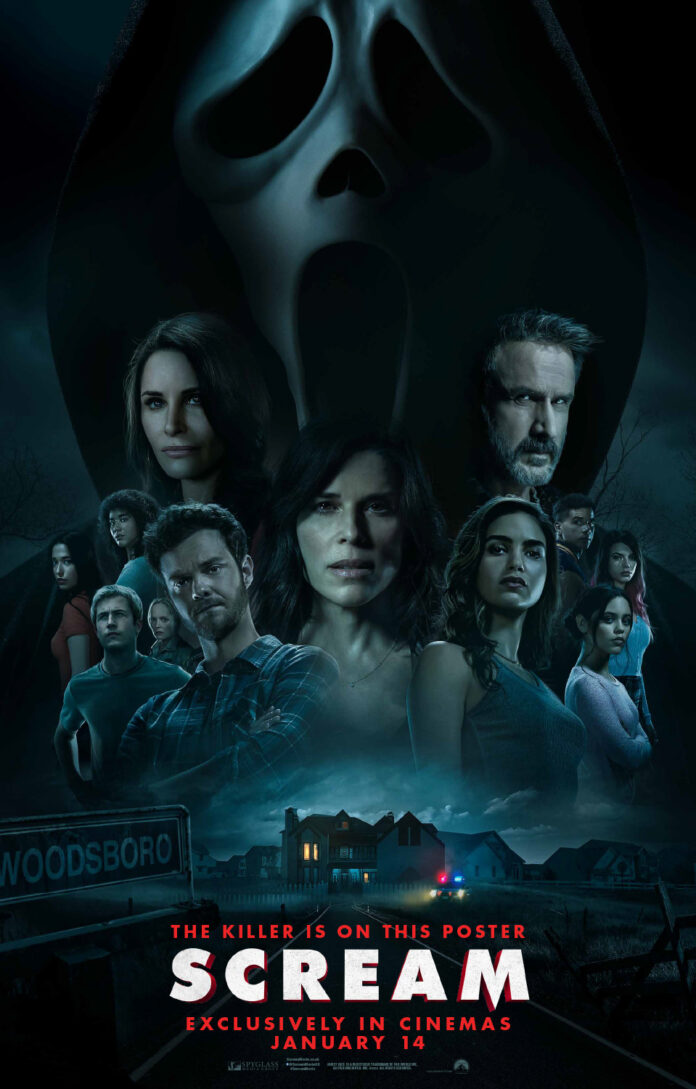 The last time we saw a slack jawed, ashen faced vacant eyed face was Gemma Collins attempting the numbers round on Countdown but here it’s the return of Ghostface the iconic masked killer from the Scream films. The genre resetting horror franchise is now 25 years old and 5CREAM or SCREAM is without its director Wes Craven who helmed the previous four films until his death in 2015. This fifth Scream film has new directors Matt Bettinelli Olpin & Tyler Gillett taking the reins and they’ve embraced the post modern irony right from the start with a revisit to the ‘lone girl at home’ scene receiving a text asking, ‘Is Wes still bugging you?’ one of several nods to the beloved original director.

We’re back in Woodsboro, a town whose population signage should be a countdown clock as Ghostface continues stabbing a succession of victims that start with the appropriately named Tera (Jenna Ortega). Ending up hospitalized it’s her estranged sister who returns home (her parents are abroad seemingly not regarding the attack on their daughter by a deranged masked killer not worth flying back for) and she reveal s a connection to the original murders. Into this come their group of friends clearly destined inevitably for the mortuary but it’s not long before the original trilogy of stars  also return namely David Arquette, Courtney Cox and of course Neve Campbell whose very presence in the previous films seems to be a magnet for Ghostface and had us wishing the three stars would appear in the next series of TOWIE. But this new Scream film very much has them as secondary characters

What made the original Scream so good was its gleeful playing with the tropes and stereotypes of horror as laid out in a pivotal scene and this new film has an equivalent with its dissection of the reboot / prequel or ‘re-quel’ as its defined here and being dependent on legacy characters for the fan base.

The franchise has long been a ‘Who is behind the ghostface mask?’ horror thriller but there’s a wilful self deprecating humour at play that leaven the film from the gruesomely gory moments and the body count is high enough to keep ardent fans happy with some unexpected twists .