‘They call me MISTER Tibbs!’ he seethed in this most famous role but in real life he was actually Sidney Poitier, the man who knocked down doors and gained recognition for black actors becoming the first to win an Oscar

He was born on 20th February 1927 to Bahamian parents whilst they were in Miami selling tomatoes. But until he was 15 years old he grew up in the Bahamas before going back to the US having US citizenship as  he had been born in Miami. He worked in low end jobs before joining the army having lied about his age where he gave his acting skills an airing by feigning madness in order to get discharged – he failed.  Having left the army he auditioned for a black theatre group in Harlem but failed to get in there and took acting lessons in an effort to lose his accent. It was there that he met Harry Belafonte for whom he acted as understudy finally getting his chance when Belafonte was ill. He continued to work in black theatre and having married he landed his first decent film role in the 1950 film No Way Out as a Doctor tending to a racist patient who instigates a race riot. Too hot a topic to show in the Southern state cinemas it served as a template for his future roles as a black man with more decency and intelligence than the white characters whose company he found himself in. 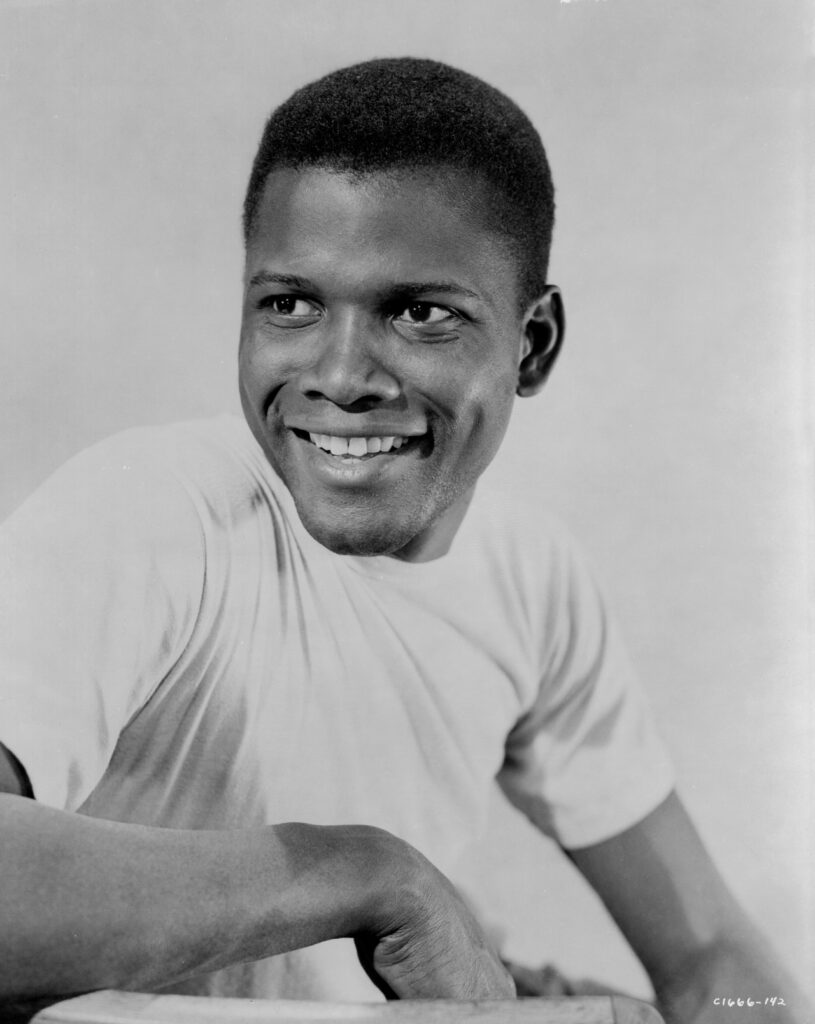 This racial aspect of the roles he took was at a time when race relations were at a tipping point and Sidney Poitier made a name for himself in these films and his commitment to black activism was spurred when shooting a film in South Africa and seeing apartheid at first hand. From then on his films had an overt racial and social commentary starting with his first lead role in 1955’s Blackboard Jungle- a film which instigated a riot in South London. But it was his role in The Defiant Ones where he played an escaped convict in the deep South whilst shackled to Tony Curtis that secured him an Oscar nomination (as it did for Curtis too). He finally won his Oscar for 1964’s Lilies of the Field as a handyman who builds a chapel in the Arizona desert for a group of German nuns. But by now his first marriage was collapsing and in 1965 he divorced. 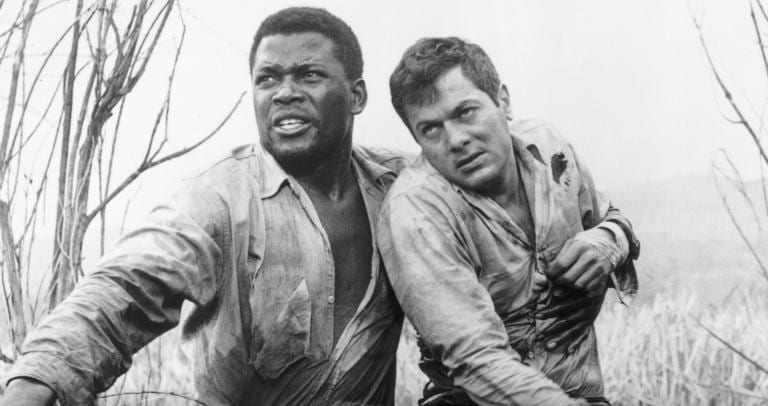 His racially themed films stoked controversy notably in A Patch of Blue where he kissed his white co-star Elizabeth Hartman – inevitably it was a scene that was cut from the print shown in the deep South. Though he had an Oscar to his name it was three 1967 films that would really make him an international household name. Those films were To Sir with Love, Guess who’s Coming to Dinner? and of course In the Heat of the Night as a detective investigating a murder in a Mississippi town with racist cop Rod Steiger. The film was a huge success and prompted  two sequels yet those films were far less successful and Poitier found his popularity on the wane as  civil rights issue found a rising resistance. All was not lost though as in 1974. because the Bahamas had been a British outpost when he was born, Sidney Poitier became Sir Sidney Poitier 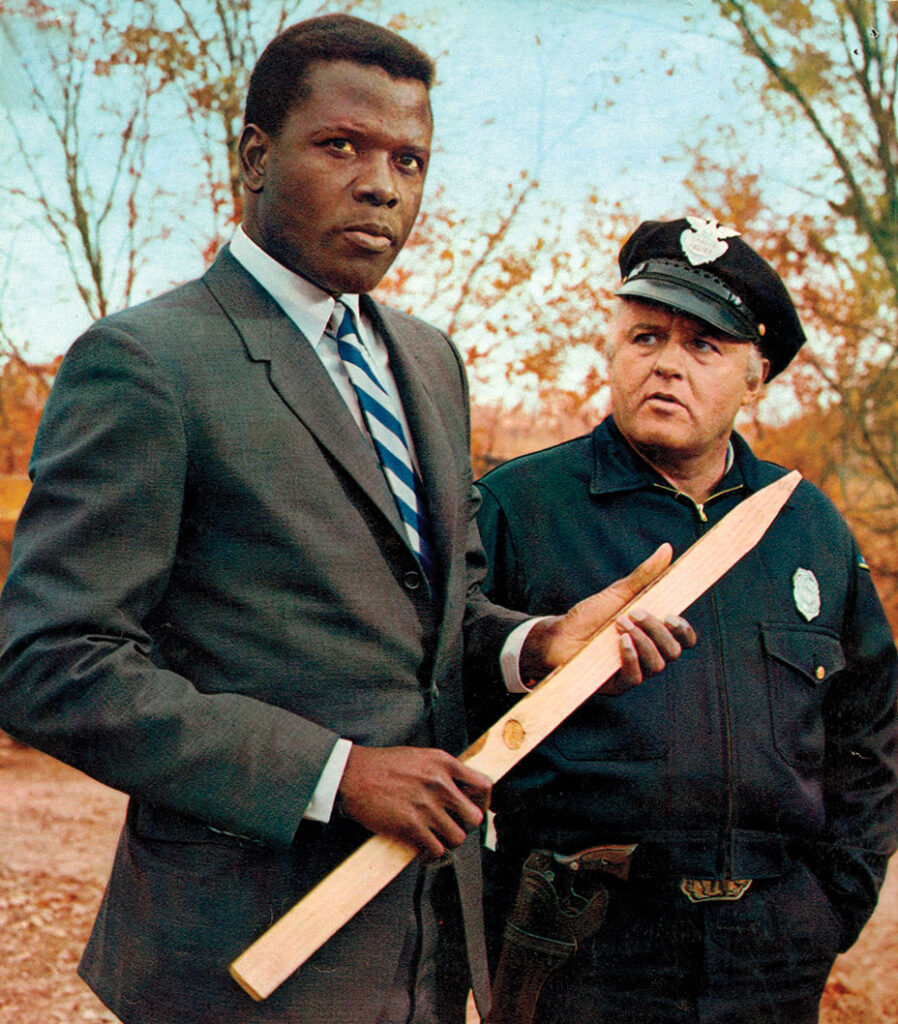 With roles in films with important themes of race equality increasingly more difficult to come by he turned to directing with his debut being Buck and the Preacher which he also starred in opposite Harry Belafonte. It did OK at the box office but after a back catalogue of serious dramatic roles he turned his future directing skills to comedy throughout the 1970’s having by then married his second wife (after a nine year affair with Diahann Carroll)  with a series of films featuring Bill Cosby yet it was his 1980 film improbably starring Gene Wilder and Richard Pryor that was a huge hit.

A decade later saw him stepping back from the cinema although his appearance in the 1992 thriller Sneakers is well worth a look, But by 1997 he was made the Bahamas ambassador to Japan until 2007. Meanwhile his first Oscar would be joined by an honorary one in 2002, In 2009 he awarded a presidential Medal of Freedom with 2016 seeing a BAFTA fellowship come his way.  His last appearance was at the 2014 Oscars to present Best Director where he received a standing ovation and was visibly taken aback. 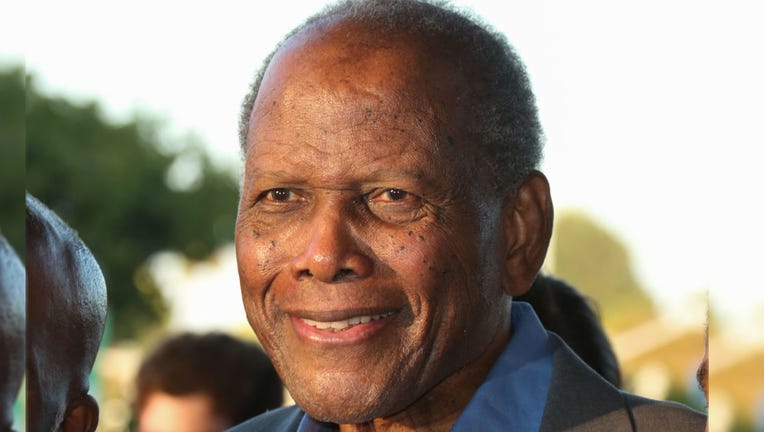 By now he was living in the Bahamas again and it was the Bahamian minister of Foreign Affairs who announced the death of Sidney Poiter aged 94. He is survived by six children