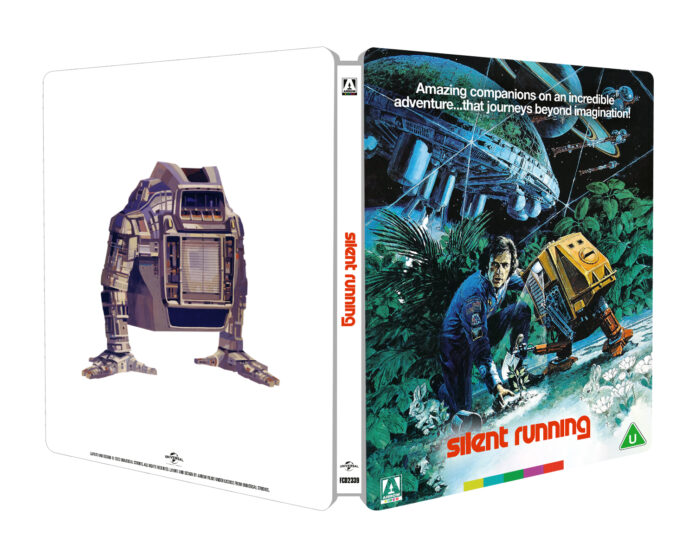 For all Stanley Kubrick’s visual brilliance it was thanks to visual effects supervisor Douglas Trumbull that made the directors vision for 2001 A Space Odyssey (1968) a reality. Three years later Trumbull would be directing his first feature film the environmentally themed and ahead of its time sci-fi film ‘Silent Running’.

In the not-so-distant future, Earth is barren of all flora and fauna, with what remains of the planet’s former ecosystems preserved aboard a fleet of greenhouses orbiting in space. When the crews are ordered to destroy the remaining specimens, one botanist, Freeman Lowell (Bruce Dern), rebels and flees towards Saturn in a desperate bid to preserve his own little piece of Earth that was, accompanied only by the ship’s three service robots.

It was a story that Trumbull had knocking around in his head for some years and the film was duly scripted by Deric Washburn a fledgling Michael Cimino (who would go on to Oscar winning greatness with The Deer Hunter), and Steven Bocho who himself would break new ground in TV drama with Hill Street Blues. Trumbull had never intended to direct it but soon realized that with the visual effects required he should take the reins aided by an experienced DoP and editor. Taking the lead role would be Bruce Dern who until then had largely been cast as the bad guy but this would be a ‘good guy’ role as he bids to save the last remaining bit of greenery aided by three robots named Huey Dewey and Louie. Dern is great in the role but it’s those three robots who are as memorable as anything else in the film. In a bid to move away from the usual android type these three squat box like robots walked round on two feet and to achieve this the robot costumes were inhabited by  late teen / twenty something double amputees whose arms fitted into the robots ‘legs’ and having them walk around the sets.

The production was not shot in a studio but actually on  large disused aircraft carrier reducing set building costs but equally the ship had no running water or working electrics and despite the size of the carrier many of the scenes were shot in cramped conditions once lighting and cameras were in position. It also meant that conditions often became hot and Dern, a keen runner, would go up on deck and continue his daily runs on the flight deck and by the end of production had run around 200 miles.

Silent Running is an often overlooked sci-fi film but was well ahead of the curve with its ecological message which makes it by today’s standards remarkably prescient and the film highly regarded by leading film critic Mark Kermode and rightly so. This 4K restoration blu-ray has, as is now standard with Arrow releases an excellent array of bonus features as follows:

The story behind the shot – Close Encounters of Third Kind

The original commentary with director and Bruce Dern is good but with Trumbull having passed away in February 2022 the new commentary is left to Kim Newman & Barry Forshaw and is as highly informative as might be expected.  The ‘making of’ is an archive film which is overlong having been padded out with lengthy scenes from the film but is nonetheless full of anecdotal insights into what went on behind the scenes. A conversation with Bruce Dern is worth a look and the actor heaps praise on the director equating his ability on a par with Hitchcock who Dern would work with on the master’s last film ‘Family Plot’ in 1976. An archive Then and Now with Trumbull reveals a man frustrated with subsequent projects falling through and it would be 11 years before he would helm his second and last feature film– 1983’s all-star, ‘Brainstorm’. Trumbull by his own admission felt that his ideas fell somewhere between the IMAX and his own Showcase format – his own immersive concept ideas really came to fruition with the theme park ride that he developed for the Back to the Future theme park ride that became a staple of all other rides at just about every single theme park since.

Silent Running remains one of sci-fi’s great unsung classics and its visuals are as impressive as might be expected from a pioneer who contribution to Close Encounters of the Third Kind and Blade Runner made them such significant entries in the genre.  Silent Ruining deserves to be held alongside the great sci fi films.