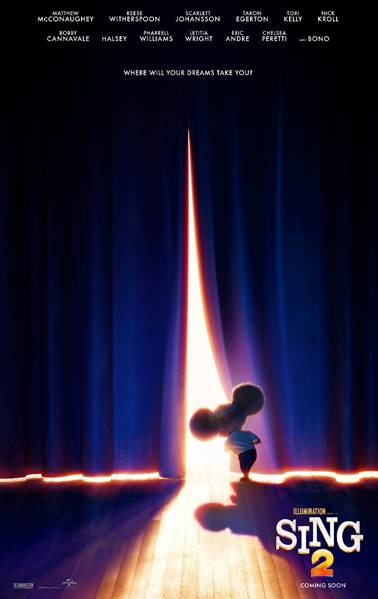 Mercifully The X Factor has long finished meaning that the terminally tone deaf have had to find other outlets to publicly embarrass themselves but with the contest having inspired the first Sing film (reviewed HERE) which earned over $634m a sequel was assured. Sing 2 returns with its array of anthropomorphised animals led by musical theatre owning koala bear Buster Moon (Matthew McConaughey).  Much like the first film the sequel is a dream for holders of pop music licensing rights from the start opening with Prince’s Lets Go Crazy which has been shoe horned into Buster’s stage musical version of Alice In Wonderland and it’s a tune surely better suited for a musical  version of One Goes Over the Cuckoo’s Nest. In the audience is a representative of powerful music mogul  Jimmy Crystal (Bobby Cannavale) who leaves half way through telling Moon that his troupe of tonsil warblers haven’t got it. Determined to prove her wrong he takes his troupe to the moguls HQ in a vegas inspired city of Red State and manages to get them to perform in front of the man himself who immediately red buttons them before they even knock out a note. But it’s his misunderstanding that Buster can get the reclusive rock star Clay Calloway (Bono singing) out of a self imposed retirement that has him financing a musical that Moon has yet to write and which Crystal insists his daughter  the ironically named Porsha (Halsey)  who has little class should have the lead role in what she calls the, ‘sky-fi’ musical

Sing 2 therefore follows how Moon can persuade Calloway back into the limelight and star in his hastily assembled show ‘Out of this World’ which in fairness when it  is finally performed has the sort of stunning set pieces and production design that could only appear in a animated film.  With its cast of animal performers each of them inevitably have their own flimsy story to contend – Rosita the pig (Reese Witherspoon) has to overcome her fear of doing a stunt in order to reclaim her lead role from Porsha, Johnny the Goriila (Taron Egerton) has to master the moves designed by a ruthless choreographer (enjoyably voiced by Adam Buxton) and Meena the elephant (Tori Kelly) has to overcome her shyness with an ice cream seller she’s fallen for. It’ll come as no surprise as to whether Calloway makes a triumphant return or not  in the climatic, ‘hey, let’s put on a musical  right here!’ much as it did in the first film.

Sing 2 is formulaic as might be expected but has a load of popular songs regularly dropped in along the way that even includes Coldplay but and here its U2 who benefit most with several songs including the specially penned ‘Your Song saved my Life’. It’s an unusual but odd bit of casting to have Bono play Calloway who sits uneasily alongside songs from Billie Eilish and to the age group Sing 2 is aimed at will mean far more than the Irish warbler himself and it’s a bit of a letdown when he doesn’t actually voice the character when he speaks but only when he sings which jolts as he bangs out the anthemic, ‘I Still Haven’t Found What I’m Looking For’.  Made by Imagination, who are behind the Despicable Me films, Sing 2 is generic fare and will keep young children entertained but lacks the imagination of their Minions films.

Find out how Bono was cast in Sing 2 HERE