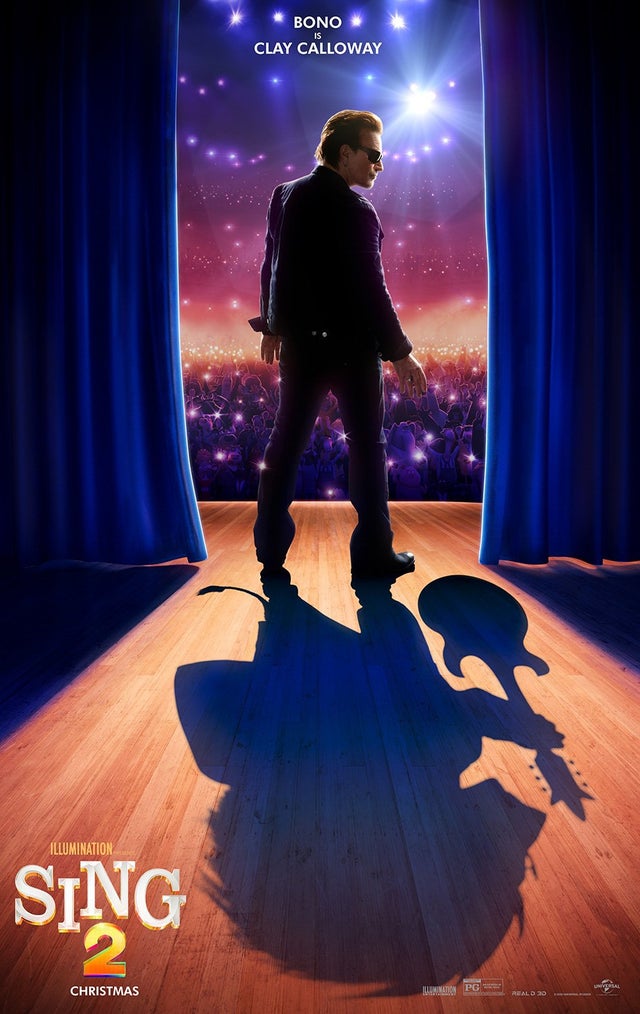 Bono was dream casting for Illumination founder and CEO Chris Meledandri and writer-director Garth Jennings, but the musician had never acted in an animated film before and the filmmakers weren’t sure he would even entertain the idea, much less say yes. “In the film Buster Moon is trying to get Clay Calloway, who is a reclusive rock star, to come on board with the show, which was a ridiculously ambitious idea on Buster’s part,” Jennings says. “To a certain degree it was equally ambitious to ask Bono to play this part. It’s not like he’s turning up in movies all the time. He’s busy being an extraordinary rock star and a promoter of goodwill around the world. But we just went for it anyway. Luckily, Bono is far more approachable than Clay. In fact, he couldn’t have been more gracious and enthusiastic.” The film features three classic U2 songs – “I Still Haven’t Found What I’m Looking For,” “Where The Streets Have No Name” and “Stuck In A Moment You Can’t Get Out Of,” and U2 agreed to write a new, original song, “Your Song Saved My Life,” exclusively for the film.

Bono’s approach to the character came out of a conversation he had with Jennings about singing. “I remember trying to explain to him how some people sing for a living, whereas others sing to stay alive … it’s like they sing to survive,” Bono says. “Sounds glib, but over the years the singers I, myself, am attracted to are often the ones that are holding on to their songs for dear life, as much as anyone who might hear them. Not all the time of course, but a great song usually answers a deep need in the writer. Garth suggested the reclusive lion, and I offered the reason for his reclusiveness. Emptiness. The void that’s left when you’ve lost someone, especially if that someone is the reason you sing. I mean, if the reason why you sing is not around, why would you bother? I was attracted to the idea of the lion who lost his roar. ‘Your Song Saved My Life’ came out of that conversation. In a strange way, it’s as much a song for the audience to sing, as it is for the artist. After we wrote the song, I started to make lists of songs that saved my life.”

Bono dug deep to perfect his portrayal of the lion and worked closely with Jennings throughout the entire process. “It’s such fun playing a lion, especially a grumpy misanthrope like Clay,” Bono says. “I’ve been lucky to see lions in the wild in Africa, and it’s impossible to forget their deep growl. It’s lower and louder than can ever be easily captured in a recording. I had a laugh going down there. Garth was very patient with me as I moved through the various voices. It was hard to match these insights with the tenor voice required for ‘I Still Haven’t Found What I’m Looking For.’ It turns out actors like Scarlett Johansson and Matthew McConaughey (see him chat to us at a UK premiere HERE)  are intensely musical just in their speaking voices…it would have been easier if I could have sung my speaking parts!”

Read our review of the first Sing film HERE