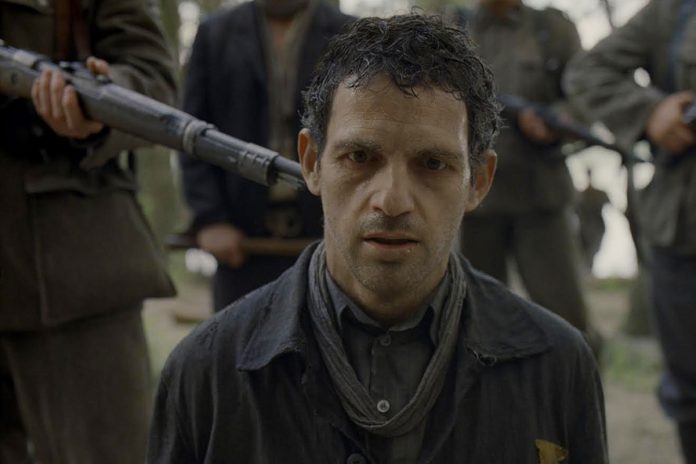 For light relief and easy viewing  films about the Holocaust come pretty low down on the list and films such as the epic documentary ‘Shoah’  make grim viewing though essential reminders of a terrible chapter in history and ‘Son of Saul’ is no different in that respect.

Like ‘Schindlers List’ this is another Oscar winner having won the 2016 Best Foreign Film and literally follows every movement of an Auschwitz prisoner who’s part of the Sanderkommando , a group of prisoners who had the horrific task of shepherding new prisoners into the gas chambers, before having to drag the bodies out and incinerate them. Their tasks didn’t end there as they then shovelled the cremated corpse ashes into a river, an utterly appalling task which dehumanizes those prisoners but appears to be the only way they could get through the day until they too ultimately  end up facing the same fate as those they have helped despatch.

Among this group we follow Saul (Geza Rohring) dead eyed to his duty until he finds a boy who has somehow survived the gas chamber only to be suffocated by a Nazi guard. Believing the boy to be his son, Saul hides the body and embarks on an almost suicidal mission to find a rabbi so that he can bury the boy in accordance with the Jewish faith, For Saul it becomes a way of restoring his humanity and becomes obsessive about finding a rabbi amongst the new prisoners that it jeopardises a planned uprising against the guards and he veers towards almost sacrificing those that are still living for the dead.

For many this may all be too much and director Lazlo Neves commounds it all with almost the entire film shot as a close up of Saul as he goes about his duties making it all the more claustrophobic that the audience can’t step back and distance themselves from the horror. Off screen  prisoners scream  and the distressed cries of babies and briefly glimpsed naked corpses being dragged away (with the guards also so dehumanised that they refer to the bodies as ‘pieces’ )just makes it all the more upsetting.

Due to its difficult and gruelling subject matter this will be for many something of a one-watch film and despite this being subtitled there is little dialogue as the images say it all in what is a worthy and well made film that is nonetheless a relentlessly grim experience.