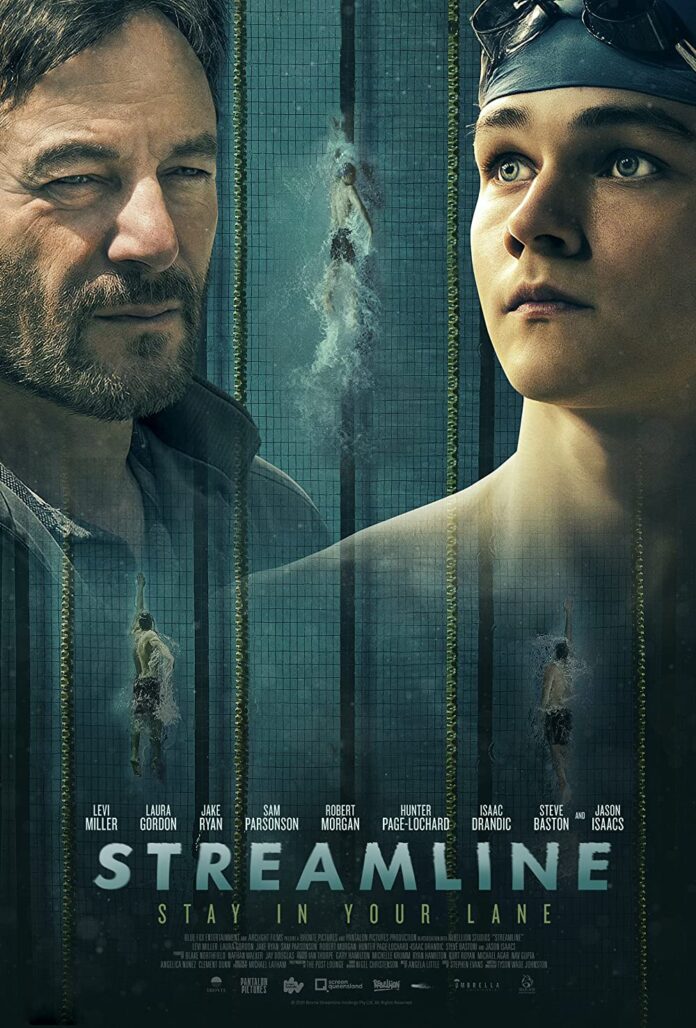 Sport movies can be divisive especially for our Editor whose interest in sport is confined to memories of his school days when the only swimming lesson he got was learning to hold his breath whilst having his head shoved down the toilet (‘You’re fired!’ – Ed).  Streamline is also about swimming but unlike your school swimming class which had you focussed solely on avoiding being anywhere near that kid who managed to treat the pool like a urinal this focuses on Ben (Levi Miller) a talented swimmer being coached for possible Olympic glory. But at 15 years old he’s battling with growing up, living with his single mother, his ne’er do well older brothers and a father (Jason Isaacs) just released from prison and trying to get back into his son’s life.

It’s his coach who piles on the pressure dangling the hope of success and medal glory against a life of failure if he doesn’t apply himself and ending up as yet another wannabe sports star who crashed and burned. With Olympic trials only a matter of months away he’s everything to play for yet there’s so much to distract him. His brothers are the archetypal bad boys whose lives have amounted to nothing and Ben is in danger of being dragged down by them and his father’s efforts to reconnect with him make Ben an emotional time bomb.

Streamline has testosterone coursing through it with female roles very much secondary and the brothers, his Dad and the coach being the key male figures in his life and his being referred to by others as ‘boy’ makes it difficult to break out from the men’s shadows. Like any adolescent Ben battles with the choices that can make or break his future and Levi Miller is excellent in the role and there are surely great things ahead of him.

We spoke to Levi Miller about Streamline and his role plus a whole bunch of other stuff…..