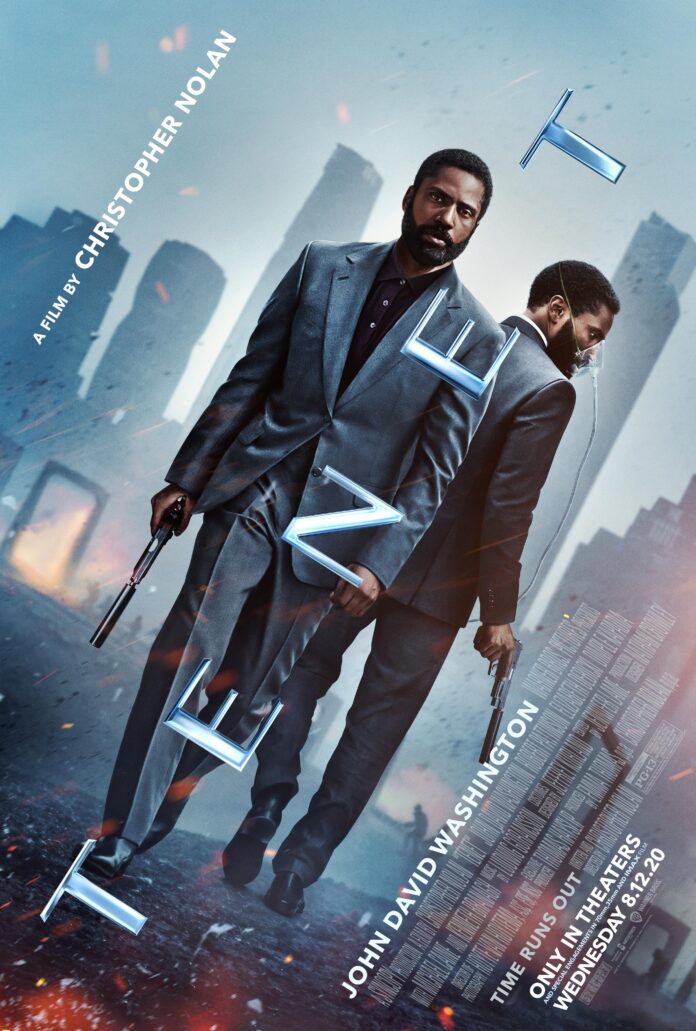 With only a week left of the summer we finally get our first summer blockbuster movie with Christopher Nolan’s Tenet. Kept under wraps with even the trailers not revealing too much…….well  there’s a reason for that because this is high concept, mind bending stuff and there’s a lot to get your head round. What we can tell you is that Tenet is not the rumoured sequel to Inception.

With John David Washington as The Protagonist, some sort of ex CIA espionage man who finds himself recovering from a botched operation, one of many brilliantly orchestrated set pieces, he’s signed up by a shady organisation an introduced to the concept of time inversion. It something that sees a Russian oligarch Andrei Sator (Kenneth Branagh) with a precognition ability and the last sort of person you want to be able to have control of that kind of thing. What is of major concern to the agency is the ominous threat of something worse than World War III and The Protagonist is recruited along with right hand man Neil (Robert Pattinson) to set about saving the world. Crucial to their success is Sator’s abused wife Kat (Elizabeth Debicki) trapped in a loveless marriage and desperate to take her son and break free from her crazy bastard husband.

Now Nolan’s films can probably be divided into two with the crowd pleasing  straight forward blockbusters (Batman trilogy) and his more esoteric high concept ones such as Inception and Interstellar. Tenet undoubtedly falls into the latter category and if you’re thinking of going to get some more popcorn or popping out to the loo, forget it because Tenet needs you to listen to every line if you want to follow the plot which is balanced with the stunning scenery but as one character says early on, ‘Don’t try to understand it’.  Nolan has captured several action sequences that reward a second viewing within the plot structure and its understandable that he has been compared to Kubrick because this has moments like his early film, ‘The Killing’, a film about a racecourse heist gone awry rewinding to the start of each characters involvement repeatedly arriving at pivotal moments that reveal some new aspect of the plot which is what happens here with several of the major set pieces.

Tenet, much like the recent ‘The Invisible Man‘ has a marriage of domestic abuse as one of its central themes with Sator having trapped her into staying married yet at the same time treating her terribly with The Protagonist wanting to help her as much as he wants her to help him. At the same time, much like Inception, this is the Bond film that Nolan so loves making (and we’d love so see him make one in the official franchise). Like every Nolan film since ‘The Dark Knight’ this is an event movie made all the more important by the fact that it’s the first mega budget blockbuster to be released since lockdown in March and like Tarantino he’s probably the only director who can get a massive budget for an original project greenlit and quickly break the $100m barrier. Nolan is the master of cerebral blockbusters and every studio will be keen to see how this performs but this is as spectacular and innovative as you might expect but just don’t expect to understand it all on just one viewing.

Save the Cinema movie…….