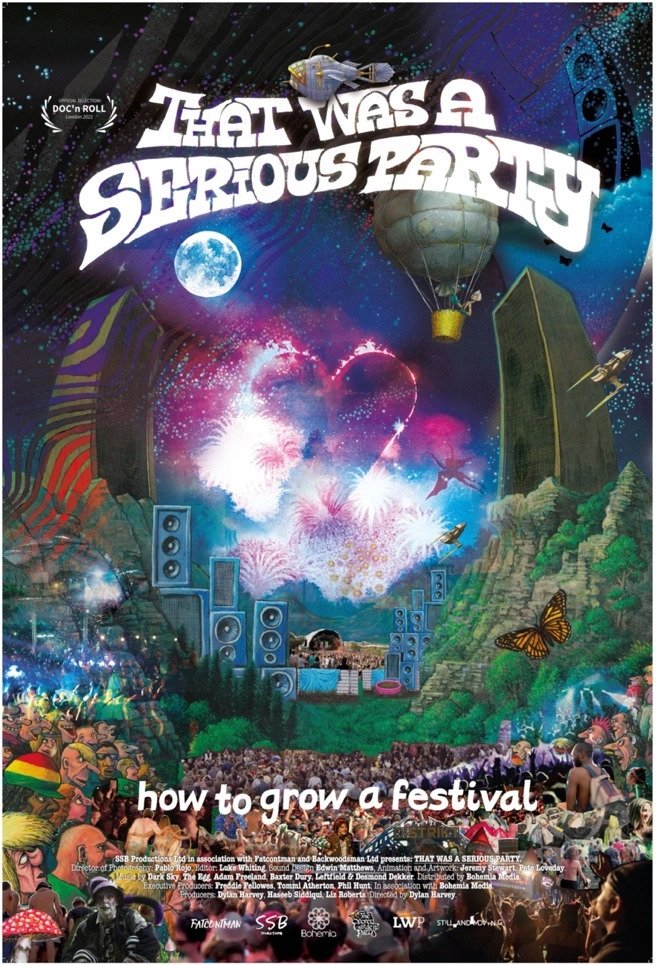 So whilst just every summer festival is about the music the Secret Garden Party was solely about having a great time with the music being almost incidental. Anyone attending would have seen phenomenal fancy dress, boozy bonkers party games in a field and left saying, ‘That was a serious party!” Starting in 2003 it was instigated by Freddie Fellowes and some friends in the grounds of a Georgian Farm House in Abbots Ripton and initially seemed to have been an enormous leap of faith adhering to that Field of Dreams adage, ‘If you build it they will come’ and 300 people did and within a few years had swelled to 35,000.  A magnet for party animals and eccentrics alike the documentary goes behind the scenes of a festival that was notoriously publicity shy refusing corporate sponsorship and media coverage but with the explosion of social media it proved impossible to keep what was Cambridgeshire’s worst kept secret a secret and 2017 saw the organisers close it down seemingly forever

Dylan Harvey’s documentary talks to Fellowes and his long term organisers, party goers and party animals alike as they discuss the early years and how it quickly blossomed and became an almost suspended reality, indulgently bonkers with the onus on the attendees or ‘gardeners’ having the wildest of times and yet That was a Serious Party is not without its serious and ultimately tragic moments notably of one of the regular gardeners Vito Neo Rago who embraced the counter culture of the festival, changing outfits regularly throughout the days and yet the festival turned out to be something of an escape for a man who suffered badly from depression ultimately committing suicide in 2015. His death is a reminder that despite the seemingly happy atmosphere for some the fancy dress is a mask for deep seated troubles. But the organisers have been ahead of the game leading with several innovative practices that have been followed by the major festivals and here they have supported an outreach for males called CALM – Campaign Against Living Miserably which has been a place for many to pour out their woes when they feel like it’s getting too much for them. The festival also introduced the first drug testing initiative for those who have bought something a bit stronger than ‘exotic cigarettes’ so as to be tested for what it actually is…..and plaster of Paris seems to have been a popular seller by the local dealers.

That was a Serious Party is something of a love letter divided into chapters with superb animated Peter Loveday illustrations to what was clearly a festival like no other where to get the most out of it gardeners had to fully commit to the experience. It’s little surprise therefore that five years after what was regarded as being the last ever Secret Garden Party but sees it return this year and the documentary arguably can be seen as an advert for a much missed festival that set the standard for others and whose tickets consequently sold out within 2 hours of going on sale. After watching That was a Serious Party its no surprise and after a couple of years of lock down led by inept and corrupt politician’s a few days of unbridled hedonism is much needed.

Here’s the trailer for That was a Serious Party…….

That Was A Serious Party is available to rent and buy on digital platforms from 25 July courtesy of Bohemia Media. It will screen at The Secret Garden Party Festival on Thursday 21 July, and will also be available on pre-release to registered fans July 21 via Bohemia Euphoria.