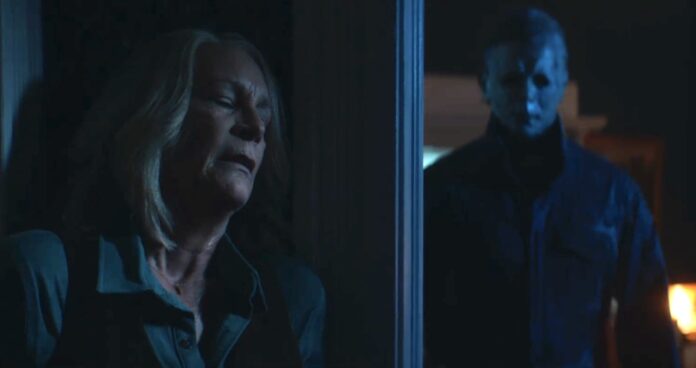 We’ve had a number of horror film trailers for the haunting season in October but the grandaddy of them is is the Halloween franchise which was rejuvenated with the beginning of a new trilogy within the series Read our review of those two previous films HERE and HERE. That trilogy now comes to an end with the release of the  appropriately titled Halloween Ends trailer.

Events begin four years after that night as Laurie is living with her granddaughter Allyson (Andi Matichak) and is finishing writing her memoir. Michael Myers hasn’t been seen since. Laurie, after allowing the spectre of Michael to determine and drive her reality for decades, has decided to liberate herself from fear and rage and embrace life. But when a young man, Corey Cunningham (Rohan Campbell), is accused of killing a boy he was babysitting, it ignites a cascade of violence and terror that will force Laurie to finally confront the evil she can’t control, once and for all.

Curtis had played the role seven times previously and this is believed to be the last time she will play it. Appearing with her in the film is Will Patton, James Jude Courtenay, Nick Castle, Kyle Richards, Michael O’Leary and Omar Dorsey.

Directing again is David Gordon Green with original director John Carpenter producing with them putting out a statement saying that the film is something of a departure that is  “going to make people very angry,”……something that could be taken in either a good or bad way but we’ll know for sure when it is released on October 14th 2022