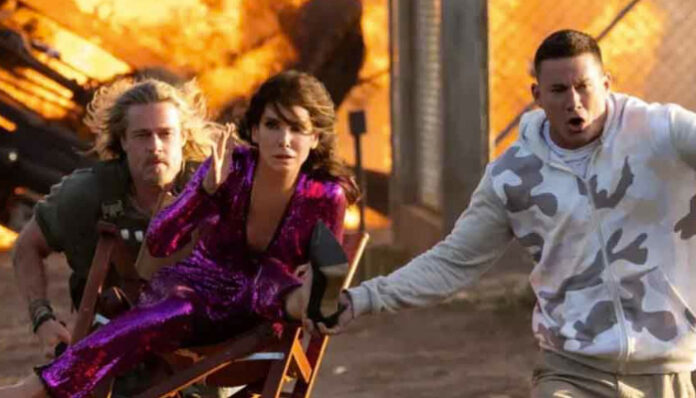 Clattering through the jungle in high heels and a spangly sequinned jump suit is a far from ideal situation to find yourself in and seeing Sandra Bullock in such a scenario in The Lost City only served to bring back memories of our Editor on his stag night (’You’re fired! ‘ – Ed). Bullock is Loretta Sage a romance writer running on empty and the chore of churning out her pulp romance novels with covers featuring vain model Alan (Channing Tatum) as her novels titular hero. Alan loves the attention almost believing he is the novels romantic lead whereas he just irks Loretta which comes to a head in a very funny book launch for her latest novel with Alan in attendance soaking up the attention from the female fans.

But the book launch has two bomb shells with both involving Loretta who first tells her agent that she’s not writing any more of the novels and secondly finding herself abducted by Abigail Fairfax (Daniel Radcliffe) yes, Abigail in the first of several digs at woke culture and gender neutral names). His reason for his kidnapping her is that he knows that the lost city in her novel is real and her knowledge of ancient writing means she can translate a scrap of hieroglyphics that will lead him to lost treasure. With her whisked off to the island Alan summons up the help of his meditation guru Jack (Brad Pitt) and Loretta’s agent (Da’Vine Joy Randolph) in an obviously ill-fated attempt at rescue.

The four leads are a great bit of casting. Pitt has always been an underused light comedian and Channing Tatum is ideally cast as the him-bo and is a highlight of the film in much the way that Chris Hemsworth as the secretary in 2016’s Ghostbusters stole the show. Like Tatum, Bullock has also proved herself adept at comic roles and is comfortable in the role but it’s no surprise that her icy character soon thaws and begins to fall for Alan’s daft but sincere self. Kudos also to Daniel Radcliffe in a rare outing as the villain of the piece and he has his share of the good lines. Perhaps the only weak role is Da’Vine Joy Randolph as the literary agent who adheres to the erroneous adage that ‘fat is funny’ whereas morbid obesity is a type 2 diabetes magnet.