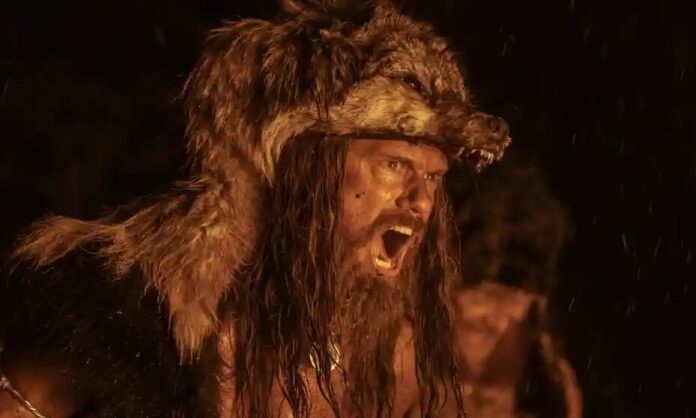 If there’s one director who sets himself seemingly uncommercial projects its Robert Eggers. His debut  feature, The Witch (reviewed HERE)  set in 17th century England saw a family torn apart by witchcraft and the most demonically cantankerous old goat ever to grace a screen since Geri Halliwell appeared in Spice World. His follow up The Lighthouse (reviewed HERE) was set in the 1890’s and saw two keepers driven insane by the isolation and now Eggers latest film, The Northman, is an Old Norse legend that sees him go back even further in time to 895AD and like his previous films the dialogue is highly stylized and  at times necessitates subtitles. A Scandi set thriller this sees King Aurvandil (Ethan Hawke) return to his Queen Gudrun (Nicole Kidman) and young son Amleth. Celebrating a successful campaign he initiates his son in a dizzying ceremony that is the first hint at what lies ahead for audiences. Eggers spins his camera as the semi naked characters bark insanely under the mind bending influence of a potion. But it’s a precursor to extraordinary scenes that await further down the line.

The King is killed alone in a woods by his duplicitous brother Fjolnir (Claes Bang) with Amleth escaping by the skin of his nose , ironically its exactly what he chops off his uncle’s henchman in  order to escape being murdered. Watching his father’s village pillaged and his mother snatched away to become his uncle’s wife Amleth escapes by boat swearing revenge  for the death of his father at his uncle’s hands. It’s all a bit Hamlet which is what this old Norse legend inspired. But here there is no indecision about the method of revenge, there is no feigned madness. This is a warrior out to wreak violent revenge and when we catch up with Amleth he is now part of a anther clan and transformed into a chiselled battle hardened man of extreme violence reduced to almost animal bloodlust seen in one of the films many breath taking sequences. With his clan he strides through a village slaughtering all and sundry in his path like a Gemma Collins hen party and when that is done they set about the village children in a truly disturbing scene. But Amleth still out to avenge his father’s murder and now unrecognizable as an adult, he becomes a slave in his Uncles household along with fellow slave Olga (Anya Taylor –Joy) and together bit by bit he acts out his revenge on his Uncle in order to free his mother.

Not for the faint hearted this is an epic retelling of the legend and Robert Eggers whose films have always been visually accomplished has taken it to another level. Like many directors Eggers is now starting to gather together a superb cast of favoured actors for his films and though this is led by Alexander,  it sees Willem Dafoe return ( having played a lead in The Lighthouse) and there’s a fleeting cameo from Ralph Ineson (who was the male lead in the Witch). With a great cast committing wholesale to the film its Nicole Kidman who gets THE standout dramatic scene that ends the second act and spins it all in a new direction.

A maelstrom of bloody murder majestically photographed with plush rich colours vying with bleak black & white scenes this is what cinema and the big screen does so well. The Northman is possibly the most exhilarating film we will see this year. It is extraordinary and firmly establishes Eggers as one of the most stylish director working today.