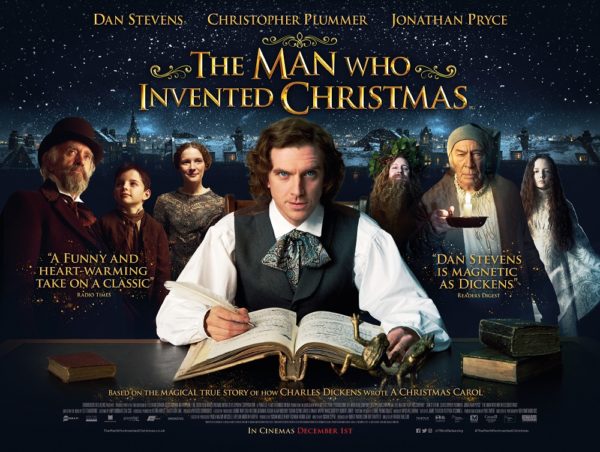 In a recent chat with our Editor about favourite novels we asked him if he liked Dickens to which he replied ‘Yes,  but I never get invited to any’ (‘You’re fired!’ – Ed). Contrary to popular belief Christmas was not invented by Coca Cola , a conglomerate of toy makers and Mrs Mary Christmas but apparently by Charles Dickens at least that’s the theory put forward  in this story behind the novel, A Christmas Carol. Having had three successive flop novels Dickens, having been a bit of a showman himself doing probably the first book tours with theatre readings of his latest novels, found himself desperate to avoid the flop trilogy turning into a flop quartet of books. His publishers were reluctant to pay him an advance on his next book and his friend/agent John Forster (winningly played by Jeremy Edwards whose drunk child entertainer is a highlight of the stand up circuit) who despite his best efforts was not much use and it fell to Dickens himself who ended up financing the publication of his own book which had to be written and published in the six weeks leading up to Christmas. The making of A Christmas Carol, which might be an alternate title for the film, is all a little bit cut and paste certainly for its first half but by the third act introduces all manner of cod psychological insight as to how the story came into being

With Dickens constantly distracted from writing it’s a wonder the book ever came into being and the distractions which included his feckless father, servants knocking at his door and imaginary chats with his fictional characters, ultimately become as irritating to him as they are to the audience.  There’s far more interest in the story behind the story but this suffers with the scenes of him interacting with those fictional creations and Scrooge just annoys with his crotchety negativity. It’s most satisfying scenes are those with his fellow author and rival William Thackeray (Miles Jupp) who taunts and mocks him about his failed books.

Dan Stevens is a likeable enough presence as Dickens which he initially plays in a jaunty enough fashion more akin to kids TV and has the support of Simon Callow (Mindhorn), himself something of an expert on the author having written weighty and respected books on the author, plays the illustrator whose pictures are responsible for so many portrayals of Scrooge, played here by Christopher Plummer who despite being 87 years old has had a busy year with The Exception and has recently replaced and reshot all of Kevin Spacey’s scenes in the upcoming  ‘All the money in the World’.

Regrettably the film does start to lose its way halfway through in what feels like an interminable 98 minutes and really this is a Christmas film for TV ideal for falling asleep in front of after a big Christmas lunch. B’ah Humbug!