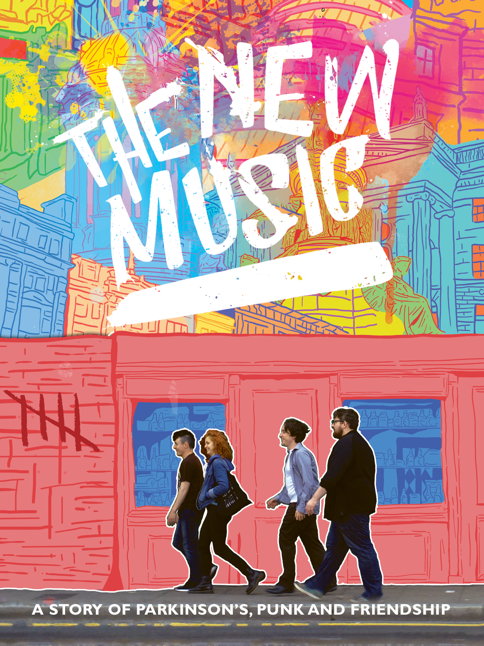 With Lockdown3 now in full effect we’re missing the big screen experience as much as we know many are missing live bands though frankly none of us are missing the Busker Bill, the one man band who performs near us. In his efforts to coordinate a guitar, bass drum, cymbals and a mouth organ it often sounds like a tribute at to an orchestra falling down a flight of stairs. But we would begrudgingly accept that it is a new music….it’s just that no one wants to hear it. Which shoehorned link brings us to writer – director Chiara Viale’s new film The New Music which picks up with Adrian (Cillein McEvoy) a classically trained pianist with early onset of Parkinson’s.  For anyone it’s a devastating diagnosis to receive perhaps even more so when you’re young and in Adrian’s case so dependent on being able to control your movements as a musician.

Understandably afraid of the deterioration in his health and feeling that he’s failed his family he runs away to Dublin where he rents a room in the house of punk rock band The Cellmates aka Will (Jack Fenton), David (Patrick O’Brien) and Jodie (Martina Babisova). This is hardly the filthy squat associated with many of the punk bands of the 70’s. In fact there’s not even the house mate argument about who used the last of the milk and put the empty carton back in the fridge it’s remarkably clean house and orderly house with the band mates. The bands street performances have a sparky joy matched only by the apathy of passers-by but it doesn’t quell their love of music. It’s in stark contrast to Adrian moping about and with all the enthusiasm of a politician having to publicly announce a policy U turn.

None of the band are aware of his diagnosis or his classical training although when they are one of them with a remarkable insights tells him, ’You’re really musical!’ that leads them to accept his rightly damning verdict on their songs.  But what they learn from him equally he can learn from them which in this case is to enjoy life. For both it will culminate with life lessons as the band’s songs improve and inevitably Adrian finally facing his family.

The New Music is competently made though the script does need a polish – at one point a young boy is told,‘ ’I’d like you to play that until you can feel it deep inside you in that special place nobody else knows!’  – a line only ever uttered before by Gary Glitter.  And with the band professing to be punk, just 40 years too late, and the only nod to the ‘look’ is a Mohican haircut with little of the attitude that bands of the era had with pensioners at a supermarket’s reduced items section having more of an intimidating presence whereas here the largely inexperienced cast are affable enough. Director Chiara Viale’s father suffered from Multiple System Atrophy before passing away and inspired her to write the script but whilst The New Music focus is to uplift it could have afforded more insight into Adrian’s Young Onset Parkinson’s Disease.

Here’s our interview with The New Music director Chiara Vaile…….