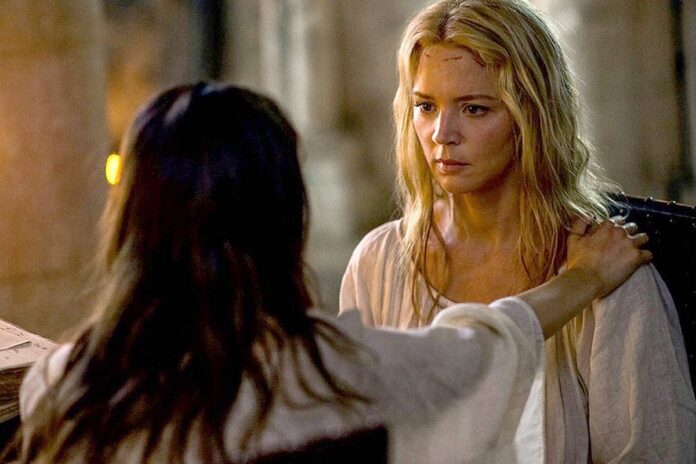 Director Paul Verhoeven helmed Basic Instinct featuring a bisexual murderer and followed it some years later with Showgirls and its parade of sexually liberated Vegas dancers so it can be of little wonder that a book titled ‘Immodest Acts : The Life of a lesbian nun in Renaissance Italy’ drew his attention and simultaneously found our Editor banned from the local library  (‘You’re fired!’ – Ed).  Inevitably an alleged true life story combining the church and sexuality the film has drawn controversy something which Verhoeven seems to welcome and Benedetta will certainly won’t disappoint on that front.

Benedetta is one of those, ‘inspired by real events’ films and has the very easy on the eye actress Virginie Efira in the lead role as the 17th century nun.  Seen first as a young girl devout in her Christian belief it’s also the first of many digs at religion by Verhoeven when her father sells her to a convent where the Abbess (an excellent Charlotte Rampling) with more of an eye on collecting dowries  than perhaps her own calling to Christ underlined further when she tells a prospective nun that the convent is not a charity. With ever an eye on an opportunity she overcomes her scepticism as to Benedetta’s claim of visons of Christ and stigmata as a way to put the convent on the map which Benedetta certainly does but soon it will be for the wrong reasons.

It’s the arrival of Bartolomea (Daphne Patakia) a young woman seeking refuge in the convent from appalling sexual abuse by her family and falls under the supervision of Benedetta and there’s something of the initial blonde / brunette antagonism of the two leads in Showgirls with both nuns eventually succumbing to the pleasures of the flesh also aided by the ungodly use of a wooden effigy of the Virgin Mary (and mercifully Verhoeven steers clear of rosary beads!). It’s a scene that Verhoeven can’t resist lurching into the lurid and salacious as he has with all sexual aspects of his films throughout his career there for titillation more than anything else and that that she utters Jesus name at the moment of climax is both comic but also a seemingly blasphemous bait for easily outraged audiences.

Benedetta’s visions are increasingly sexualized and her lesbian affair with Bartolomea are eventually bought to the attention of The Nuncio (Lambert Wilson) or as he’s credited Le Nonce. Verhoeven loves his female characters and many of the men are seen as both exploitative and misogynist notably in an unsettling medieval torture sequence.

Benedetta is typically provocative film making from Verhoeven and even at 83 years of age he hasn’t mellowed with age still with a wilful intent to outrage. With much nudity and the occasional outburst of violence this veers between salacious soap opera and luridly camp drama and never wholly decides on whether Benedetta and her stigmata and religious visions are genuine or if she was carried away with religious fervour and a fraud that gave her influence over others.