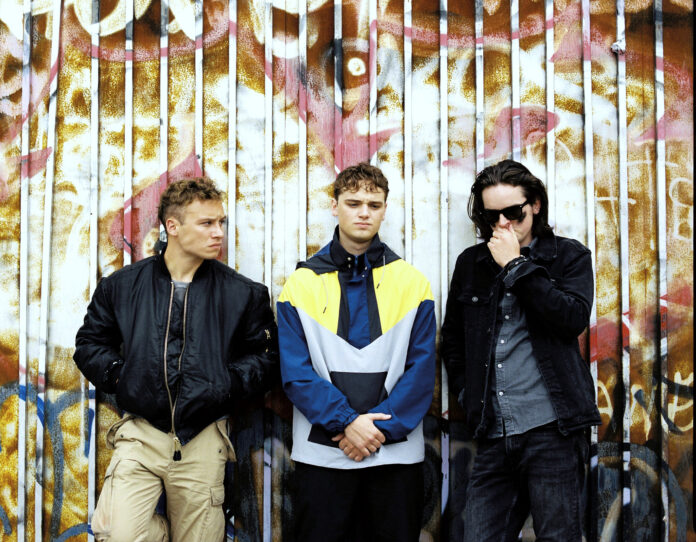 For the uninitiated Here are the Young Men is a cult book written by Rob Doyle and not the opening sentence used by a producer confirming Michael Jackson’s rider list as he shown to his dressing room.  Set in Dublin 2003 the film centres on Matt (Dean Charles Chapman) during that period of time between finishing your last exam and either going to University, travelling the world or starting work.  But for Matt it’s about all about a hedonistic party lifestyle and along with his two mates the alpha male bad boy Kearney (Finn Cole) and depressive Rez (Ferdia Walsh-Peelo) they all dive headlong into drink, drugs, raves and girls.  It’s a bomb waiting to go off and that the film opens at a funeral before rewinding two months is an indicator of how potentially fatal this might all end. 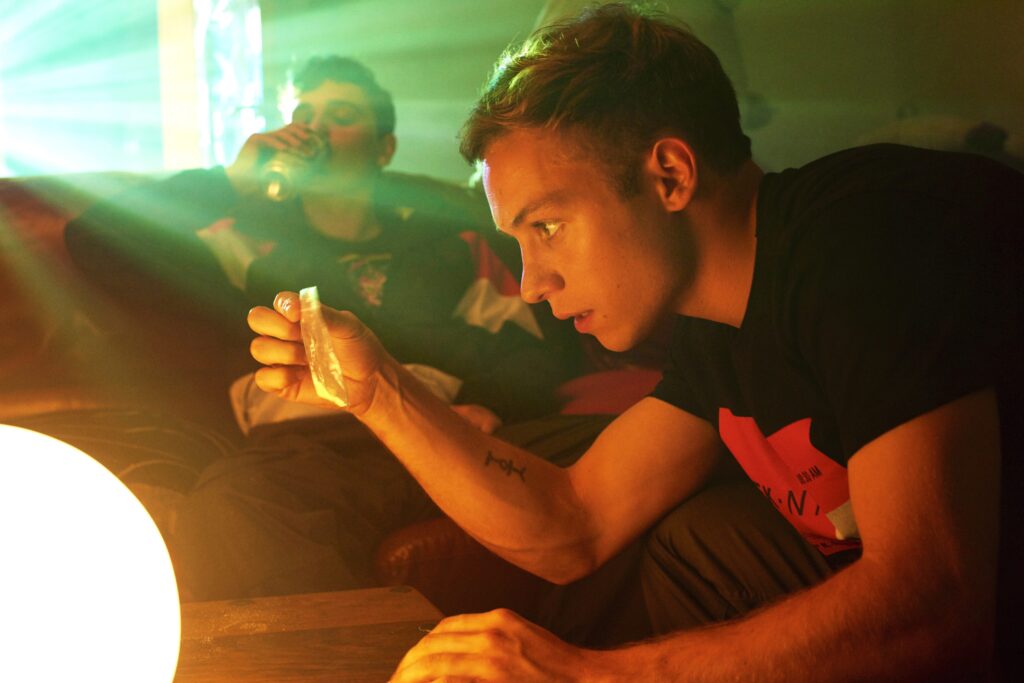 These early scenes of an end of school and the start of a new chapter in a teenager’s life are captured well by writer director Eoin Macken and are full of zest and energy.  That no man’s land between school and either further education or work is littered with landmines and yet at that age you are indestructible. It’s an idea that’s bought to an abrupt halt when the they are present at the road traffic fatality of a young girl that life can be fleeting and it sets each of them off on separate paths. Kearney becomes ever more aggressive and misogynist, Rez plunges into suicidal despair and Matt, the most sensitive of the three, does his best to get a grip on his existential angst. But all of them seem to willingly get drawn into ever more dangerous situations. There’s a toxic masculinity at work here and it’s Matt who has to man up and extricate himself from Kearney’s corrupting influence. 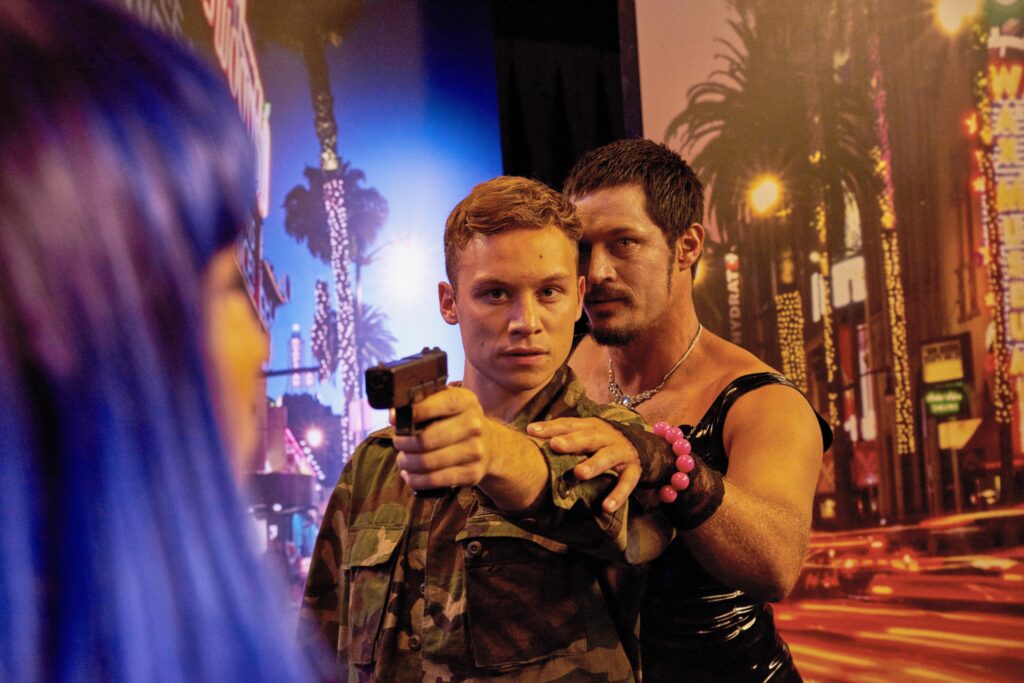 Certainly early on Here are the Young Men is reminiscent of the joyful reckless abandon of Trainspotting but this quickly fades in favour of what can be seen as something of a morality tale. It becomes a two hander between Matt and Kearney as Rez is quickly sidelined as a character. The sole meaningful female role is Jen played by American actress Anya Taylor-Joy with a convincing accent  as the love interest but the voice of reason too in what is a film of the destructive effects of a toxic masculinity. Not everything works here though. Kearney’s jaunt to a  US talk show with its laddish agent provocateur host merely disrupts the narrative to little meaningful effect which is a great shame and Kearney’s filming of his exploits on its own would have sufficed. 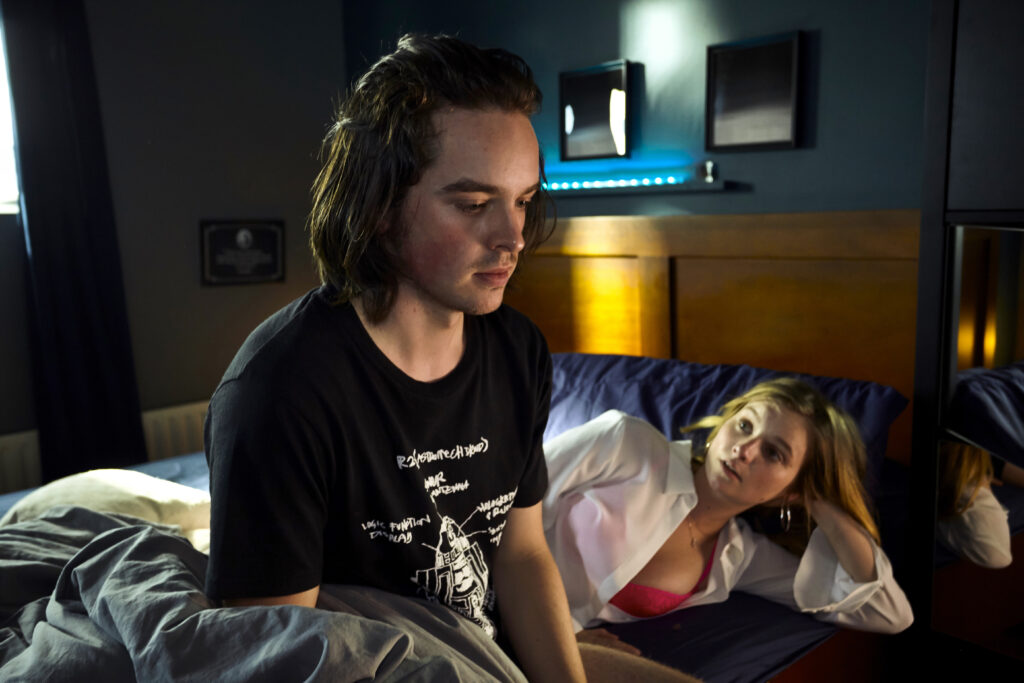 There’s a lot going on here perhaps too much for its 90 minutes with adults portrayed as incapable of effective parenting and the teens careering headlong into nihilism……post exam summers were never usually like this.

Here’s the Here are the Young Men trailer……