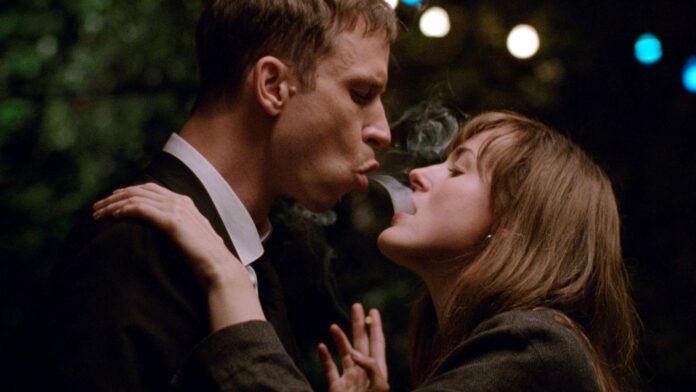 With a central character that lurches from one career to the next, makes U turn decisions has  numerous casual relationships and doesn’t give a second thought to infidelity some may wonder why The Worst  person in the World is not a documentary about Boris Johnson. Instead it is Julie (Renate Reinsve) an academically sharp medical student which a voiceover tell us that she actually wants to be a psychologist but then having started that course then stops her studies to then become a photographer before ending up working in a bookshop. Like many in their twenties she’s unsure about what she wants to commit to doing in her life and flits between casual relationships in much the same way finally settling down with Aksel ( Anders Danielsen Lie) who is far older that her and is an illustrator of a cult underground decidedly un-PC comic in the style of Robert Crumb.  They seem happy as long as they don’t talk about kids  which he wants and she’s doesn’t or at least doesn’t want to be pushed into having them and frankly an introduction to our Editors kids Adolf & Damien would have anyone getting themselves sterilized (‘You’re fired!– Ed)

It’s during one of their debates at a friend’s house about having kids that she slopes off gate crashing a wedding where she meets Eivind (Herbert Nordrum). It’s a fantastic scene as they are both enchanted with each other flirting  and pushing the boundaries of what can be construed as cheating in a way that Ana De Armas character in Deep Water fails dismally. They hit it off and are consumed with each other in that way that we all are at the start of a relationship where everyone else is invisible to you ( in direct contrast to the end of a relationship when you’ll talk to anyone but your partner with the only interaction with them being over who gets custody of that dinner service you bought and actually never really liked). It is all encapsulated in one perfect scene where Julie flicks a switch and life stands still as she runs through the streets and motionless pedestrians and traffic to see Eivind. But Julie has commitment issues to everything and everybody which will always affect her life decisions due in part to her father.

Split into a prologue and 12 chapters writer –directer Joachim Trier has conjured up a magical film that encapsulates everything about the indecision of becoming an adult and like all of us the film mellows even becoming melancholy as the chapters (or in life, the years) pass. At the moment The Worst Person in the World is the Best film in the World.

Here’s the The Worst Person in the World trailer……