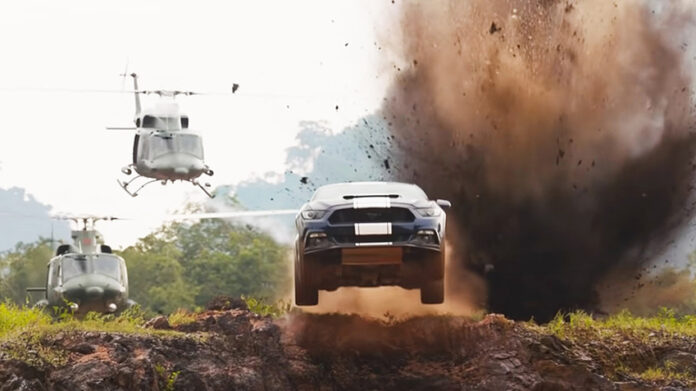 Automotive eye candy is an intrinsic part of the Fast saga. Now almost 20 years later the Fast 9 cars are synonymous with Dominic Toretto and each legacy character throughout the franchise. Multiple film units shooting across several continents have become the gold standard for Fast films. For the picture vehicle department it necessitated overseeing the herculean task of sourcing and building dozens upon dozens of picture-car vehicles. From exotics, American muscles, Japanese imports, and military armored and off-vehicles, to custom-built specialty cars and rigs with the production’s special-effects teams, the filmmakers relied on their veteran go-to team to create the most thrilling vehicle fleet in Fast 9 car franchise history.

Longtime Fast alumni Dennis McCarthy returned as the F9  car and picture vehicle supervisor to curate and custom-build the unique fleet of vehicles. McCarthy, who has continued to work with director Justin Lin on other film and television projects, knows Lin’s tastes and has an invaluable shorthand with him when it comes to delivering the unexpected or hard-to-find. McCarthy, together with his London-based counterpart, picture vehicle supervisor ALEX KING (The Man from U.N.C.L.E.), brings his their distinct tastes and love of all things automotive to the F9 story, showcasing an impressive display of vehicles from London to Thailand and Tbilisi. 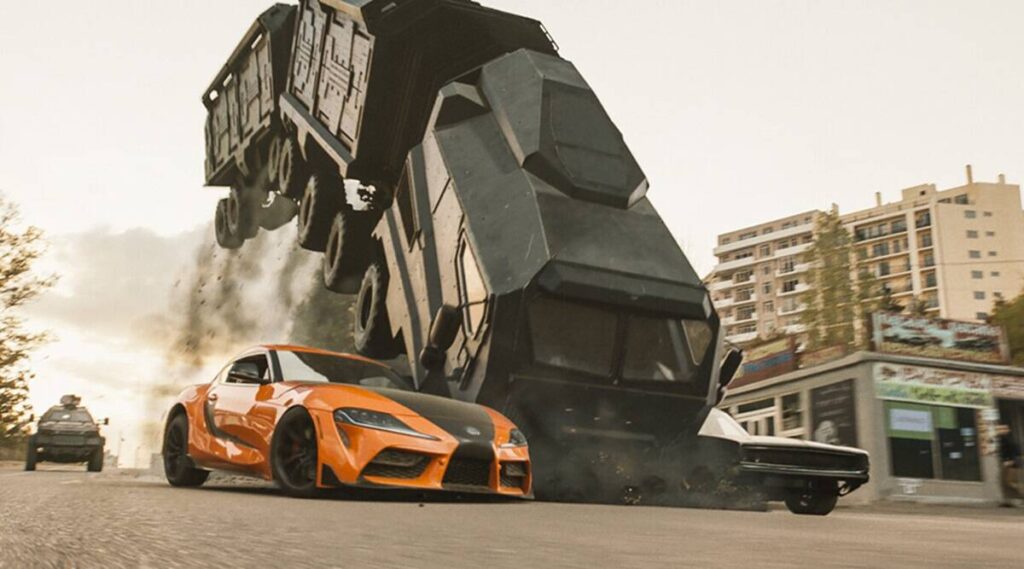 A big element of the third-act chase sequence is the monstrous 14-foot-high, 26-ton, three-section armored vehicle dubbed the ARMADILLO. Working with production designer Jan Roelfs, King was tasked with the gargantuan effort of engineering and executing another custom build that would meet both the creative demands of the scripted action and the functional demands of stunt driving at high speeds along the curved, hilly streets of Tbilisi. It took King and his department four months to work out the mechanical, electrical and fabrication requirements to complete two versions of the Armadillo and to have them prepped and ready for filming in Tbilisi.

“The Armadillo, or as I’ve always called it, the Mother Trucker, is the biggest on-screen vehicle I’ve ever seen and certainly that I’ve ever built,” King says. “The moment I saw the first concepts, I knew it would be a challenge. I just needed to work out how best to achieve that build. For me that meant breaking it down to, first, where do you start with your vehicle base? What’s your vehicle donor? Next is functionality. What’s the journey of the vehicle, and what does it need to accomplish on-camera? Number three was how do you get it from one place to the other; how easy is it to manoeuvre and transport? All these elements are running through your mind. In the end it was all worth it. The Armadillo outperformed our expectations and it looks like nothing is going to stop it, and that was the whole point. It’s the biggest and toughest thing on the road and it just keeps going. It’s like the Hulk on wheels.”

King ended up sourcing dozens of exotic super cars for Otto’s exclusive Tuner Party as well as for the posh party Queenie Shaw crashes. For that Queenie scene, shot along the street outside high-end jeweler Boodles in the tiny London neighborhood of Mayfair, King’s team showcased the NOBLE M600 along with a BUGATTI VEYRON, a BENTLEY CONTINENTAL GT, a ROLLS ROYCE WRAITH, an ASTON MARTIN RAPIDE, a MORGAN AERO 8 and a MERCEDES SLR McLAREN. All said, close to £2.5 million (approx. $1.8 million U.S.) worth of high-end super cars graced the set for filming just that one scene. 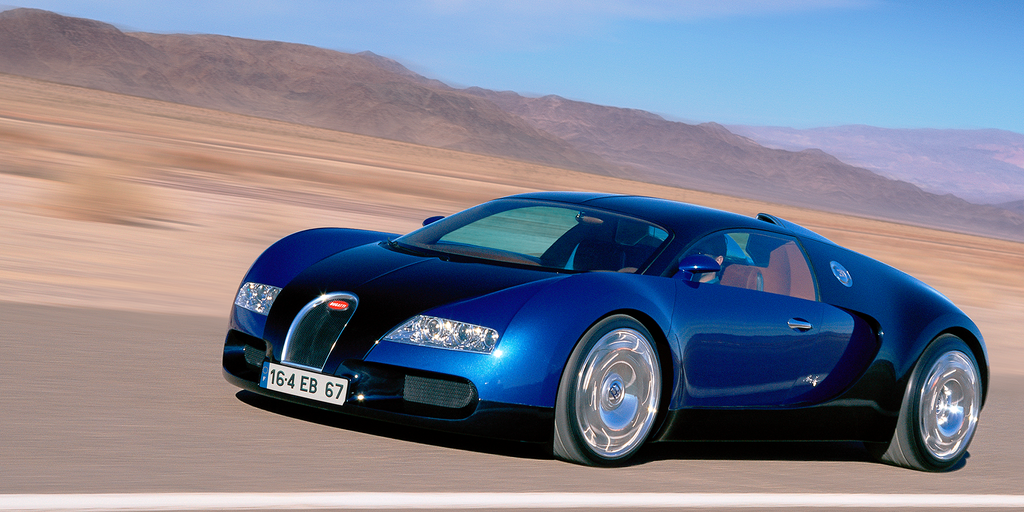 With a massive number of custom-built vehicles needed for filming across three different continents, McCarthy and King divvied up the labor-intensive work to give Lin and second-unit director every vehicular weapon in their collective arsenal to pull off the action beats for numerous sequences, each with distinct requirements and aesthetics. Off-road ATVs, motorbikes, military trucks, American classic cars and high-end performance vehicles were all essential to the action Lin visualized. Nothing embodies a Fast character more than the car she or he drives. When you see the Fast 9 car, you know the character. For McCarthy, the opportunity to source or build original, one-of-a-kind cars that look great and perform well is both his greatest pleasure and his biggest challenge.

“Over the years, the cast cars have developed along with each character and have become extensions of who they are,” McCarthy says. “With each new chapter, my objective is to sync the cars with the cast. The goal is always for the audience to instantly know which car is for which character.” Dom is a Dodge man through-and-through, and the F9 cars alone  includes the original rebuilt 1327 CHARGER, safely tucked away in the garage of the new Toretto home along with the sleek 1970 CHARGER TANTRUM, the new wide-body 2020 CHARGER SRT HELLCAT, powering through the jungles of Central America, and the MID-ENGINE CHARGER, roaring through the streets of Edinburgh and Tbilisi. 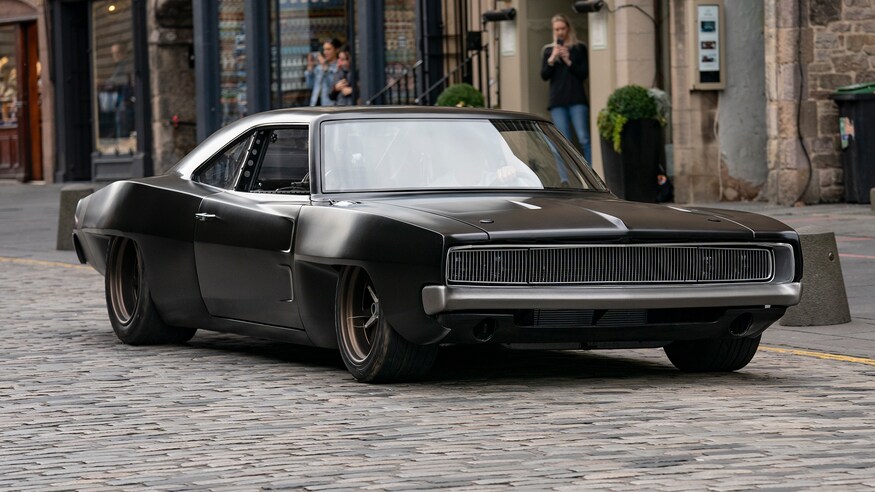 From his first read of the F9 script, McCarthy began to formulate which standout cars he needed to slot into key scenes. The third-act action sequence in Tbilisi seemed like the perfect scene for a version of the Mid-Engine Charger. Working with his own team of veteran mechanics as well as with the team at SpeedKore, whose fabrications and custom builds have long been a strong presence in the franchise since Furious 7, the roaring Mid-Engine Charger and several hybrid versions came to life.

“Dom’s third-act car, the Mid-Engine Charger, was the one car that really jumped out at me when I read the script,” McCarthy says. “Coming up with a fresh version of a Dom Charger gets trickier with every new installment because there isn’t much that we haven’t already done. Dom’s F9 Charger had to be something that was over-the-top, iconic and different from what we’ve done in the past. With its mega-horsepower Dodge Hellcat motor, unique Charger engine location, and combination of old and new technology, the Mid-Engine Charger satisfies all of these criteria. This Charger is now my all-time favorite Fast & Furious car.”

Not to be overlooked, the rest of the team get to flex their automotive muscle in their own inimitable ways on the fast 9 cars. Whether on a YAMAHA YZ250F, a HARLEY DAVIDSON IRON motorcycle or a 1969 CHEVY NOVA, Letty’s need for speed is satisfied, while Tej’s cutting-edge-yet-functional JEEP GLADIATOR gets the job done. While Roman gets behind the wheel of the HONDA NSX, as is his wont, he wholly embraces the tenet of “Go Big or Go Home” with the MARAUDER, a military armored vehicle which, in true Roman style, is the wrong car for the occasion. Han’s return could only be behind the wheel of a sleek, turbocharged orange/black 2020 TOYOTA GR SUPRA, which is an emotional throwback to the similarly colored Mazda RX-7 he drove in Tokyo Drift. This was one of several specific directives from Lin when he and McCarthy first discussed the film’s cast of cars. And, in a first for the franchise, one car gets strapped to jet engines. Tej and Roman unwittingly find Sean, Twinkie and Earl acting like crazy scientists as they test an ingeniously modified 1984 PONTIAC FIERO. The results were literally out of this world.

For the other Fast 9 cars Lin also had a very specific vision for Jakob Toretto’s vehicle. A Ford Mustang was his only choice for Jakob, an accomplished L.A. street racer in his own right. Despite the family rift, Jakob is a Toretto through-and-through and thematically, the real-world rivalry between Dodge Charger and Ford Mustang mirrored the tension between the Toretto brothers. Jakob’s car, a specific directive from Lin, is as American muscle as it gets—a modified high-performance 2016 FORD MUSTANG GT350 with a supercharged V8, 640-horsepower engine.

On any given day when the Fast 9 cars were on set, John Cena was in heaven as he surveyed automotive eye candy of every kind. “Being a storyteller is a gift, so joining a global franchise where there’s a focus on cars is something special for me,” Cena says. “It was really cool to be surrounded by elements of automotive culture every single day. The Fast franchise still keeps its roots in the car culture—and the people clamoring for what’s next in the car world—and I think that’s really special.” 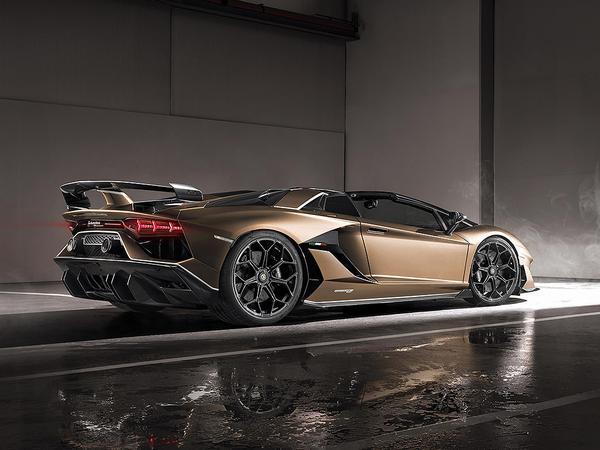 While Dom and each member of the team have their signature cars, the true showcase of a Fast film’s eye candy is the Tuner Party scene. Stunning women and equally sleek and sexy super cars seed F9’s party, which is decidedly upscale and very European. Dom is escorted to meet spoiled billionaire enfant terrible Otto at his opulent estate and is greeted with the sensory-overload spectacle of a tuner party happening on the grounds. Dom, Otto and Jakob are dead serious while hedonistic frivolity swirls around them amid the meticulously manicured and sprawling grounds of Hatfield House, a Jacobean estate located outside of London. Over a dozen U.K.-based car enthusiasts gladly accepted the invitation to show off their prized four-wheeled babies worth close to £10 million (approx. $7.3 million U.S.) including a TVR SAGARIS, a LAMBORGHINI AVENTADOR SVJ, a LEXUS LFA, a LOTUS EVORA, a MERCEDES AMG GT R, a LAMBORGHINI COUNTACH ANNIVERSARY EDITION, a McLAREN 720S and the pièce de résistance, an APOLLO IE and a FERRARI LA FERRARI.