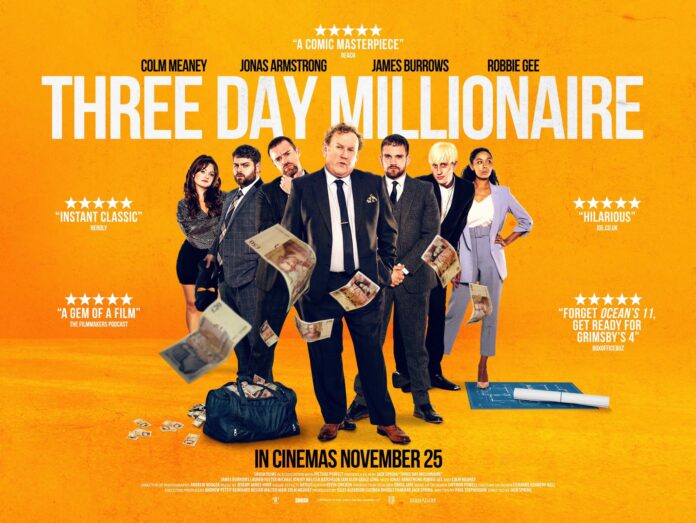 Like most people our editor has dreams of being a millionaire and is a keen lottery player and the team have pointed out that not everything is as it seems when we pointed out that it was highly unlikely that an eczema charity would be selling scratch cards. Three Day Millionaire was a phrase used by the fisherman of  Grimsby before the industry collapsed who, having spent weeks at sea, would return with their catch earning bundles of cash that they would blow over three days before they went back out to sea again. It’s Curly (James Burrows) who is one such fisherman and his breaking the fourth wall address to us the audience introduces us to his co-worker Budgie (Sam Glen) a witless lump and their bleached blonde friend Codge (Michael Kinsey) and his penchant for class A.

But Curly & Budgie are about to find their jobs are about to come to an abrupt end when his company owned and run by Mr Barr (Colm Meaney) is about to be sold off to developers in a bid to gentrify the area via costly coffee and pricy panini’s – yes we’ve been to Starbucks too. With their jobs about to disappear they decide to pull off their own heist stealing a huge wedge of cash from Barr’s office safe and set themselves up for life or so they hope. In the best tradition of these type of heist movies their plan is beset with problems and the night of the heist proves particularly troublesome.

Three Day Millionaire embraces that peculiarly British genre of community fighting the odds in the same way that The Full Monty did and perhaps whereas that film did have a real sense of the social cohesion its perhaps not quite so effectively portrayed here. That said the camaraderie between the friends works well with a cast that wholly convince as being best buddies and director Jack Spring influence is the early films of Guy Ritchie with quirky geezer voice overs, freeze frames and pop art style on screen character names.  At a nifty 92 minutes long this is an enjoyable if potty mouthed romp that breezes along.

We spoke to director Jack Spring about the making of the film….

Will ‘War for the Planet of the Apes’ lead to the...