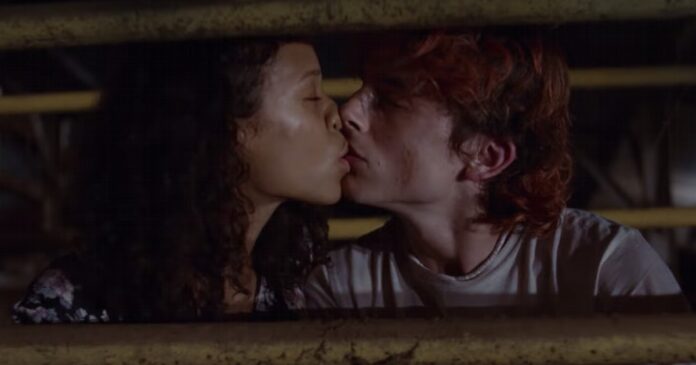 Whilst cannibal movies have always had a certain niche in film the cannibal road movie romance is perhaps even more niche as is the case with Bones and All. Maren (Taylor Russell) along with her father drifts from one town to the next, the reason for which remains unclear until one night, against her father’s wishes, she sneaks out for a sleepover with school friends who gossip and paint their nails. But the nail painting turns to nail biting if not actual finger biting when Maren inexplicably bites off her friend’s finger. It’s a shocking moment and blood smeared Maren rushes home where her father whisks them away from the town within minutes. Maren is a cannibal and unable to control her urges that we find out later started with her eating her babysitter is the reason why the father and daughter never settle in one place for very long.

Shortly afterwards on her 18th birthday Maren’s father abandons her leaving some money, a note and a cassette tape (this is set in the 1980’s) explaining why. Alone she has to fend for herself in what is the beginning of a road movie where she looks for her absent mother Janelle (Chloe Sevigny in what will be a typically indy film role). Maren is ‘an eater’ as informed by a softly spoken man Sully ( Mark Rylance) who has an ability to sniff out those with a similar appetite  and takes her in and tries to be her mentor and companion. ‘Whatever you and I got – it’s gotta be fed!’ he tells her and his M.O. is to watch the elderly, lonely and infirm pensioners pass away before feasting on them, Rylance is a compelling presence and his appearance here in saggy Y-fronts and a vest feasting on the flesh of a dead pensioner is a wholly unexpected one.

But Maren soon leaves the creepy Sully behind her and comes across Lee (Timothee Chalamet) also a sort of drifter and their love story develops as they cross America hunting human prey as they get closer to finding her mother. Their journey finds them encountering other eaters –in particular a greasy cannibal partnered by a non-cannibal cop who has a twisted interest in their feeding habits – who they meet along the way in a scene that intimates the danger the pair might find themselves rather than relying on gruesome effects.

Chalamet has a huge mostly female fan base, and his appearance here as a rake thin stray who himself perhaps more readily reconciled to his cannibalism might not be the role they want to see him in as this does get gruesome but not as explicit as seen in The Green Inferno or the notorious Cannibal Holocaust and for his fans it’s his looks that still turns heads but his actions here will turn stomachs too. It a brave role for the heartthrob to have taken and perhaps with all the furore it would seem a more  obvious role for Armie Hammer !

Based on the book by Camille DeAngelis this has been adapted by David Kajganich who also wrote the screenplay for the remake of ‘Suspiria’ and both have been directed by Luca Guadagnino the European director whose horror films are distinctly of the art house type and Bones and All is no different on that front. At the centre of this is desire, addiction and alienation set within an unusual  romance of two similar people finding each other but though the young couple are engaging enough it is Mark Rylance as ever who compels.

Here’s the Bones and All trailer…..