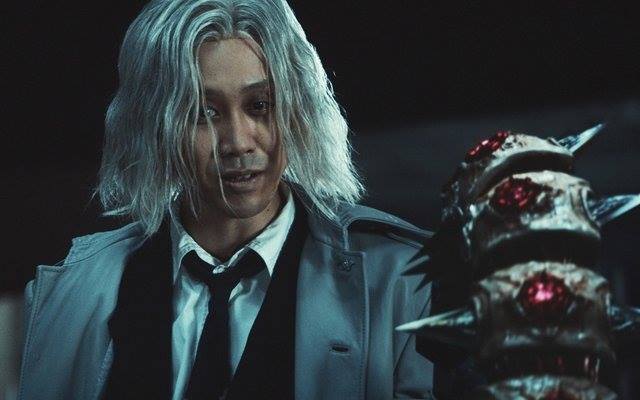 Starting with a low key pair of boys meeting up and talking about asking a girl for a date Tokyo Ghoul starts as a seemingly run of the mill teen angst movie and it’s only when the date goes ahead with the most unexpected result that it can be seen as being unlike anything you were expecting.  Kaneki Ken (Masataka Kunota) is a bookish and shy student who finds himself transformed into a flesh craving ghoul spouting enormous wings from his back and even though the CGI effect makes him look like a malevolent Haribo it’s still pretty effective in conveying the awesome ghoul he has become. His penchant for egg mayo sandwiches has been replaced with a lust and a need for human flesh to keep him alive. Appalled at what he’s become he initially resists the temptation to hunt for humans but hunger takes over and he’s taken under the wing of a group of fellow ghouls who own and work at a cafe whether other like minded souls gather as they serve up a flesh placebo replacement meal.

Ken spends most of the film as a bit of a gibbering wreck and irritatingly so and there’s a desire to give him a slap to shake him up a bit with his continued whining about what he’s become rather than him trying to do something about it and the scenes of him wretching  up human food, which he can now no longer stomach, become a bit wearing.

Ken  is a god guy turned bad and it’s a pair of detectives who specialise in covertly eliminating these ghouls from society who come into the mix. One of the detectives looks like a Vileda mop at a Charlie Chaplin convention and  goes about his work with gleeful relish and has an array of weapons at his disposal including what looks like a giant kebab purloined from Stavros kebab shop.

Director Kentaro Hagiwara has fashioned a stylish real life anime with CGI that is not always convincing looking at times like it was cobbled together on a home computer and he’s not always avoided such pitfalls as the preparing for battle montage and a running length that’s slightly too long. What he presents here though is the corruption of a decent guy turned bad and a clear danger to society yet portrays the detectives who protect that same society as the bad guys of the movie.

Visually it’s as distinctive as you might expect from Japanese manga influenced films with characters spouting tendrils from their back like Spiderman’s nemesis Doc Oc. With fights that play much like  those seen in the Matrix which in itself were inspired by Japanese films it has now come full circle again and is likely to have the Hollywood studios sniffing around the rights for a US remake.