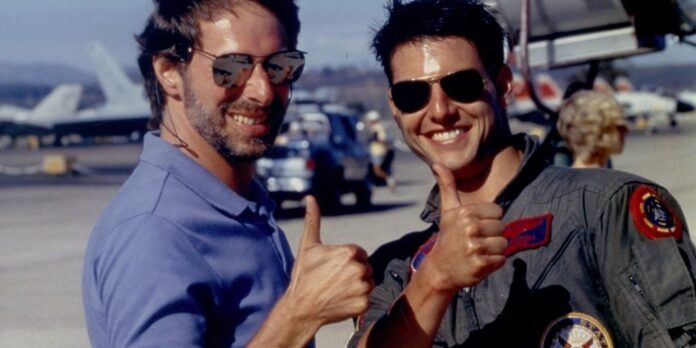 So whilst Top Gun 2 when its finally and hopefully released in November 2021 will have been delayed for 18 months it is now 35 years since the first film came out. Producer Jerry Bruckheimer has been talking about the making of the film and how we almost had Top Gun without Tom Cruise

‘It wasn’t easy. We wanted Tom after we saw “Risky Business” and he kind of hemmed and hawed. So we arranged for him to fly with the Blue Angels at the Naval Air Facility in El Centro, California. He drove up there on his motorcycle and he had just finished a movie with Ridley Scott, “Legend,” and his hair was long and in a ponytail. And they took one look at him and thought, we’re going to give this hippie a ride. They took him up on an F-14 and flipped him and did all kinds of stunts to turn him around and make sure he never got back in a cockpit. But it was just the opposite. He landed and he walked over to a phone booth and called me up and said, “Jerry. I’m making the movie. I love it.” He became an amazing aviator himself. He can fly just about any plane they can make.’

So now that Top Gun without Tom Cruise seems unimaginable and the producer went on to say that he thought the film would be a flop.

‘We had a preview in Houston. The audience was muted and it felt like we had a flop on our hands. When the cards came back, they rated the film with a high score and we couldn’t figure out what happened. How come the audience wasn’t laughing and showing they were enjoying this movie? What we didn’t realize was that this was two days after the Challenger shuttle disaster and since we were in Houston, a lot of people had friends and relatives involved in that.’