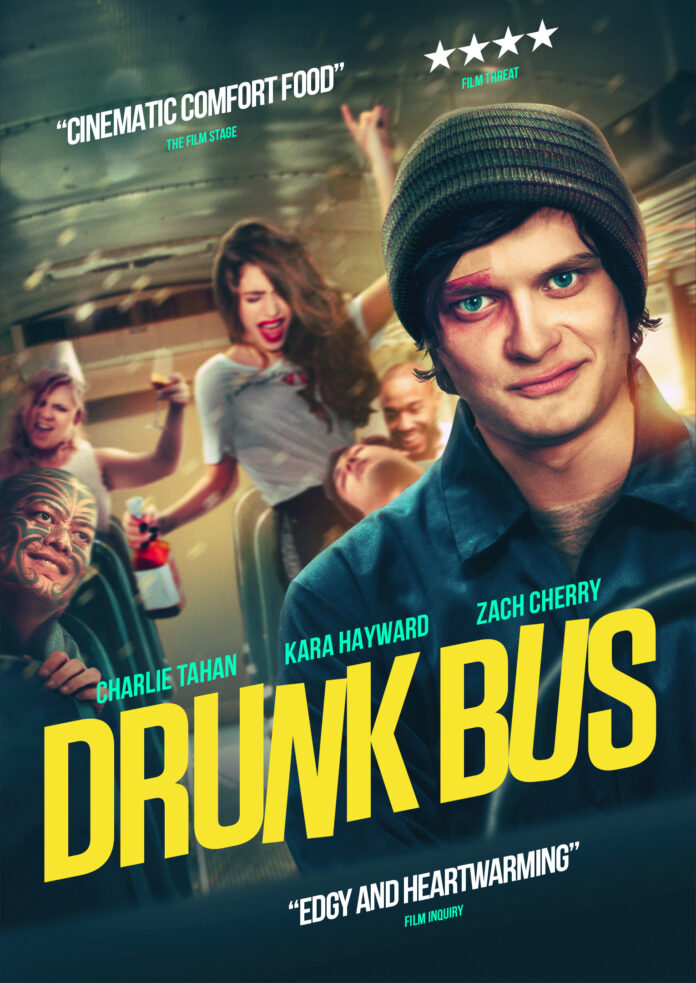 The night bus is a staple of student life and can’t have been much fun for the driver with a load of mashed up 19 year olds going on about how great their gap year was. It only got worse as they try to walk down from the top deck without slipping in the pee, poo and vomit and in that respect it can’t be much different from being Gemma Collins dry cleaner after a spa retreat detox. So the Drunk Bus might prompt memories for its audience. Set in 2006 and apparently, ‘inspired by real s**t’  it has Michael (Charlie Tahan) still pining for his ex-girlfriend Amy  but finding himself trapped in a dead end job driving the student campus drunk bus – a mode of transport specifically built to pick up and drop off students.

It’s in this capacity that he encounters various oddbods from F.U. Bob, a potty mouthed wheelchair bound man traversing the roads at night who Michael insists on giving a lift concerned about his safety. There’s Kat and Justin a pair of passengers on his bus keen to advise on his love life. But its Pineapple (Pineapple Tangaroa) who is the biggest character, literally, a gigantic Samoan with a face full of tattoos and tribal piercings and has been hired by the bus boss as security when Michael gets punched by a loutish student.

Pineapple’s fearsome appearance belies a gentle soul and the pair strike up a kinship as Michael goes about his bus driving duties. There’s something of the Jay and Silent Bob about the pair of them with both exchanging  banter and Pineapple becoming something of a sage with his words of wisdom about love and how Michael can get Amy back who’s has left town for a career leaving him there. But it’s when she starts texting him saying she’s coming back that his emotions become conflicted as he also battles with his pissed up passengers.

But it’s not an easy thing to write consistently engaging and funny dialogue and Drunk Bus is a little overlong and it does peter out about half way through with an ending that’s expected. There’s plenty to like in Drunk Bus which is essentially an odd couple slacker comedy along the lines of early Seth Rogen films with the main players all likeable and Michael’s love dilemma being familiar to many from their days as a student and the mismatched couple are a likeable screen partnership as they go about learning life lessons from each other.