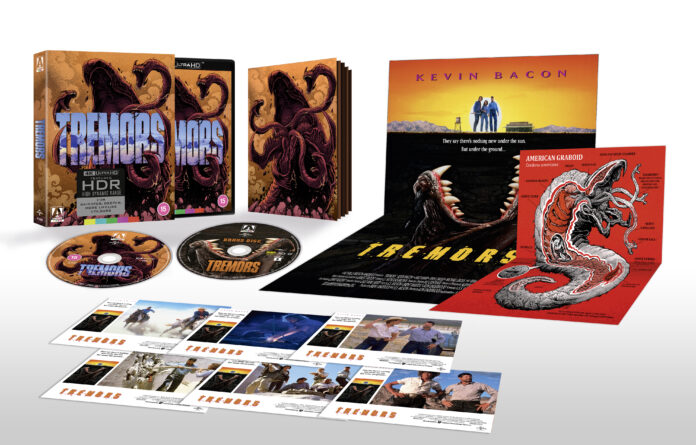 Released in 1990 Tremors was released on the cusp of a change in visual effects. An old school horror comedy monster movie  it featured on set  practical effects, miniatures and the occasional optical effect at a time when movie effects were about to change forever. James Cameron’s  ‘The Abyss’ had been released the year before with its groundbreaking water tentacle whose technology would be developed further in Terminator 2 before  Jurassic Park had  audiences jaws dropping with photorealistic dinosaurs. But it’s that old school practical effects that is just part of the charm of Tremors. 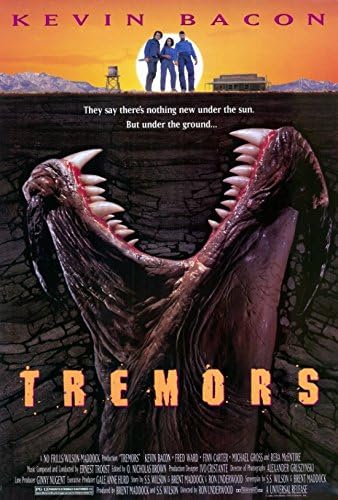 Set in a tiny town of Perfection it would see the handful of residents led by two handymen played by Kevin Bacon & Fred Ward defend themselves against underground ‘graboids’, giant vicious worm like creatures that are killing them one by one. The film had been written by Steve Wilson & Brent Maddock who had had huge success with their script for ‘Short Circuit’ and followed by ‘Batteries Not Included’. They had been part of a company that had included fledgling director Ron Underwood. With a only a handful of shorts and a few TV episodes there was little hope of him being part of the Short Circuit package from two debut writers. But with its success he had a chance to direct his feature film debut with Tremors.

The script had gone through a number of titles including Beneath Perfection, Dead Silence and even Land Sharks before settling on Tremors. This new 4K restoration blu ray release of Tremors has an unusual featurette  with the agent for the three of them explaining how she managed to pitch the Tremors script and its intriguing about how she pitched to it the right studios with the help of James Cameron’s producer and now ex-wife Gale Anne Hurd who was obliged to offer it to 20th Century Fox and Disney before Universal bought it financing it with a modest $11m budget. 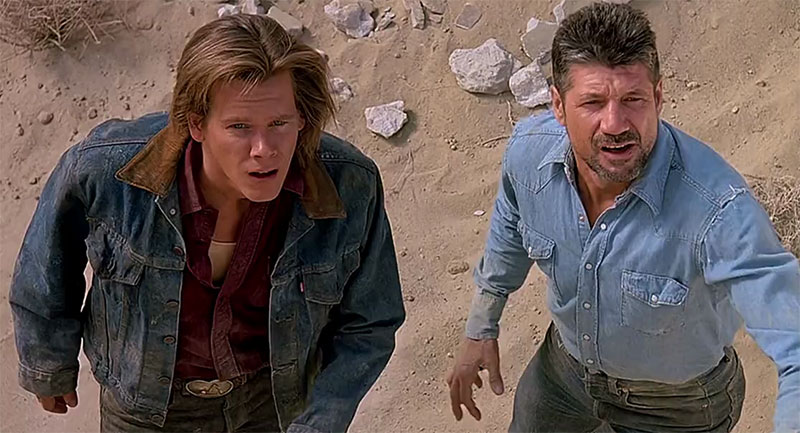 Shot mostly on location 3 hours from LA, Tremors leads Kevin Bacon & Fred Ward were cast. Bacon had had huge success with his breakout role in 1984’s Footloose but subsequent films had fared badly and the script about giant killer worms had him wondering what his career had come to but was persuaded to take what would be a lead role getting him top billing. By all accounts it was a happy shoot with cast and crew bonding over the project despite a number of unexpected issues that included a crew member suffering a heart attack, a desert dust devil whisking through the set, the desert sand getting into the practical monster effects causing them to break down and on one occasion a huge rattlesnake being found under a table of catering. 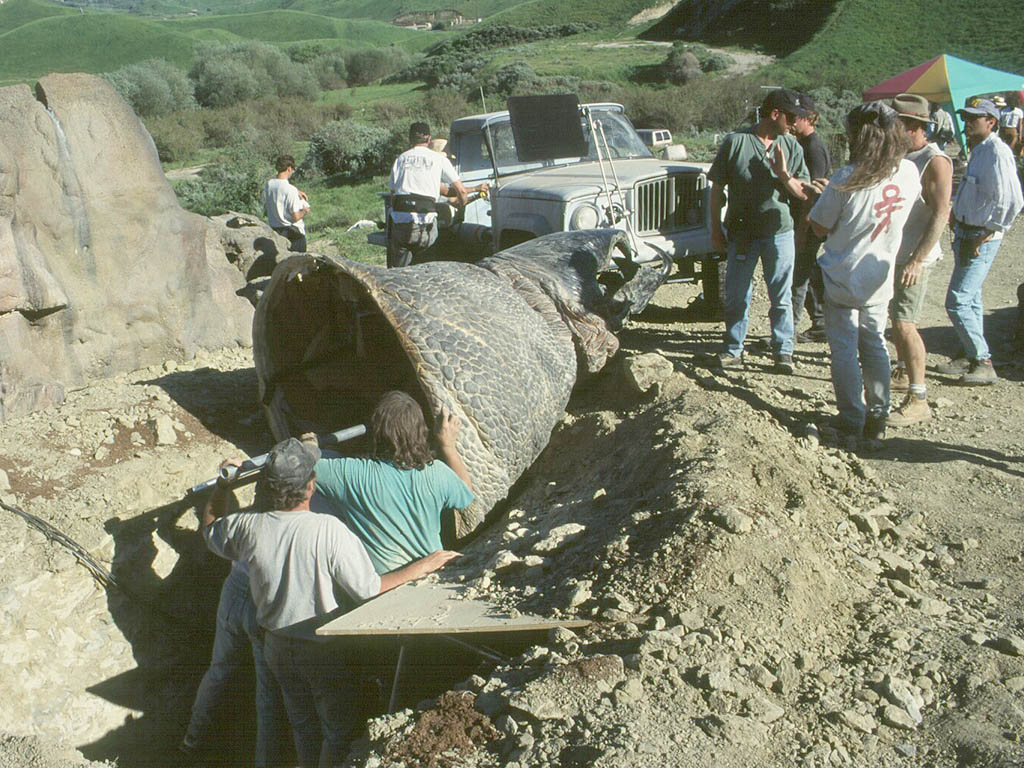 Much like The Thing, and The Shawshank Redemption the film didn’t perform well at the box office earning just under $17m worldwide due partly to a poor marketing campaign that didn’t really know how to pitch the horror comedy to prospective audiences. But like those two earlier films Tremors really found its audience on the home video market which was booming. So successful was the money earned from that market that it has spawned five further films, the most recent of which, ‘Tremors : Shrieker Island’ was out this year. 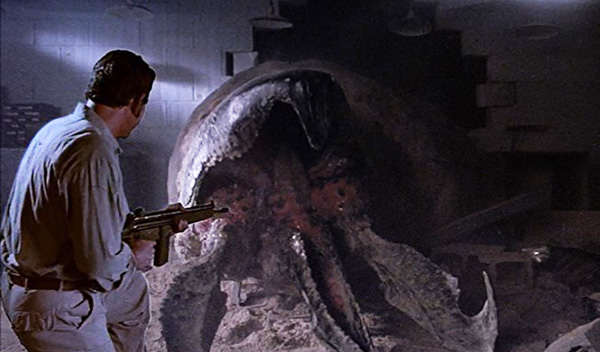 Like so many releases from Arrow videos there’s a lot of love gone into this brand new 4K restoration blu-ray of Tremors that includes an insightful commentary by Ron Underwood and the two writers, as well as a separate commentary by the author of an unofficial guide to Tremors. But there are featurettes galore on this collector’s edition that includes a making of documentary an a whole load of interviews with the effects teams, cinematographers, producers, composers. All good in themselves but there’s unusual bonus features on the discs too that includes the original opening scene, a feature called ‘Overdubs’ which does a scene comparison of lines dubbed for TV but there’s also a Q & A of a 25th anniversary screening of the film. It’s a mark of just how much the cast & crew love working on the film that they turned out en masse to such an extent that they had to spilt the session into two running before and after the film. Add to this another excellent essay on the film by Kim Newman, 2 x double sided poster, postcards, trailers, TV & radio spots and archive EPK from the original release. 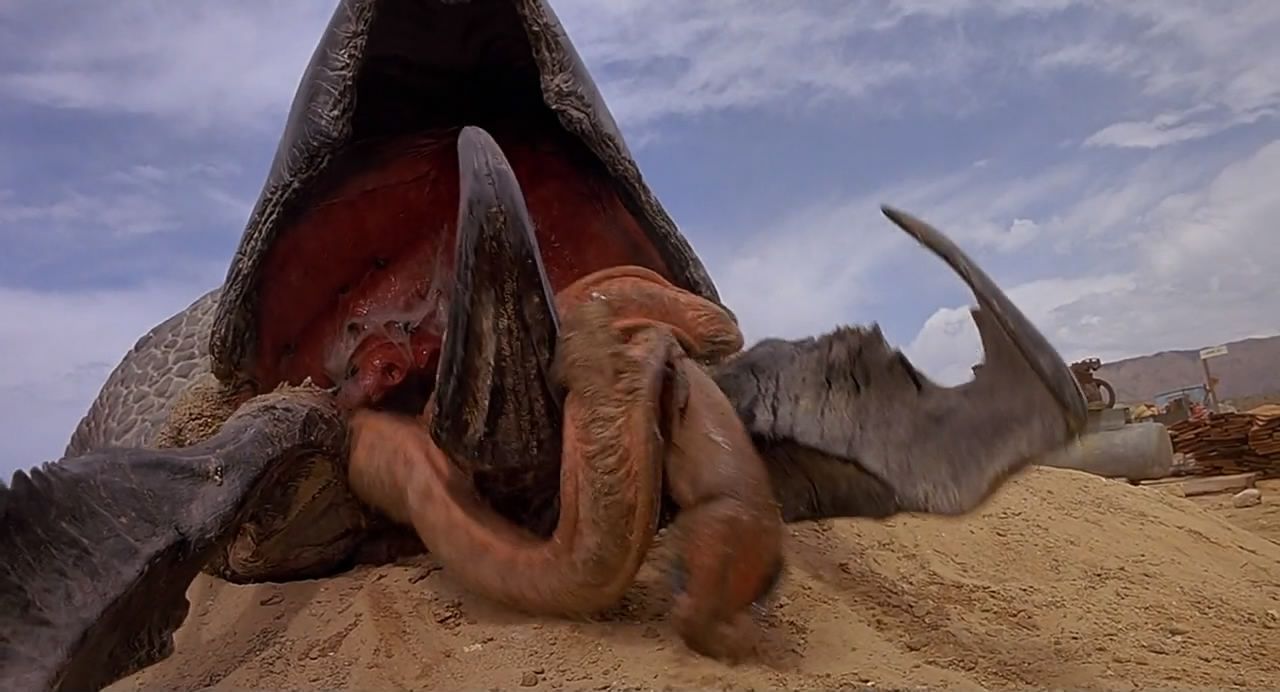 If you’ve never seen Tremors this is a perfect opportunity to watch what is a love letter to those creature features of the 1950’s and it has rightly accrued an ever burgeoning fan base. Immensely enjoyable that befits from a  great script, and is another film that shows how good a monster movie can be without CGI that saturates films today. Tremors is terrific.