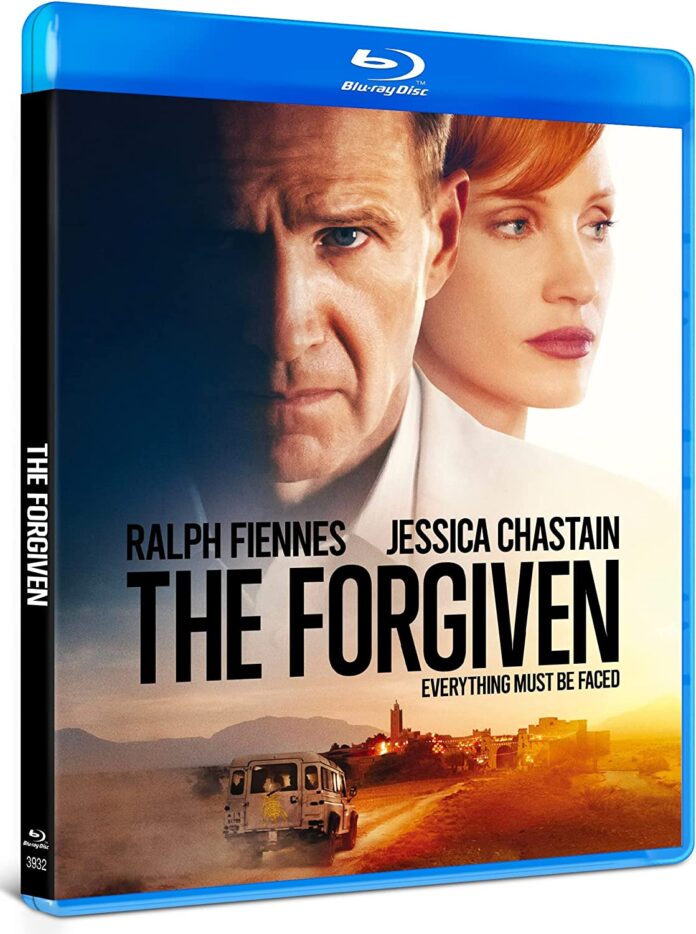 When your brother is acclaimed award winner playwright and film maker Martin McDonagh whose films include In Bruges, ‘Three Billboards Outside Ebbing, Missouri’ and the recently released The Banshees of Inisherin then the bar has been set high for your own films. But writer John Michael McDonagh rises to the occasion with his own films including The Guard, Calvary and the John Michael McDonagh comic cop drama ‘War on Everyone’ and his latest film, ‘The Forgiven’ is equally good.

Starring Ralph Fiennes and Jessica Chastain as couple, David & Jo Henninger whose marriage is hanging by a few threads. They travel to their friend , or her friends as he reminds his wife, in the High Atlas Mountains  of Morocco for what will be a lavish party. The party is being held by the louche and catty Richard (Matt Smith) for his a flouncing petulant and frankly irritating partner Dally (Caleb Lamdry Jones) – that he has a pony tail decades after the rave culture ended signals the sort of person he is. At the increasingly hedonistic party are a number of British, French and American friends many somewhat stereotypical and nearly all faintly racist towards the Moroccan people and servants often referring to them as ‘these people’. Equally the servants contain their contempt for these hedonistic westerners.

War on Everyone reviewed here

But for Jo & David it goes awry before they even arrive when they accidently run over a teenage boy killing him and in panic bring the body to the venue asking Richard to help. It’s further proof how the Westerners regard the locals when he tells them that he knows the police captain and as long as they look suitably contrite it will all be sorted. But what they don’t count on is that the boy’s father arrives at Richard’s house demanding that Richard must pay respects to his son by coming with him to bury him. David understandably is reluctant – is he going to his own death? – but eventually he agrees and with her husband temporarily out of the picture Jo embarks on a fling with one of the American partygoers.

The Forgiven, with such a title, is obviously going to be something of a morality tale set against a background of a clash of cultures. Released in cinemas it was a drama with adult themes that deserved to do better and now released on DVD and blu-ray is worth a look. Fiennes as David the ‘high functioning alcoholic’ a description he regards as cancelling each other out is as good as ever as is Chastain and Matt Smith excels as a wealthy gay man lording it over the locals.

So whilst the film is a decent brooding drama the release on Blu-ray & DVD is a little disappointing with a vanilla disc whose only bonus feature is the trailer…and that’s it. A commentary from writer director John Michael McDonagh with a discussion about how he went about adapting the book the film is based on for the screen would not have gone amiss.