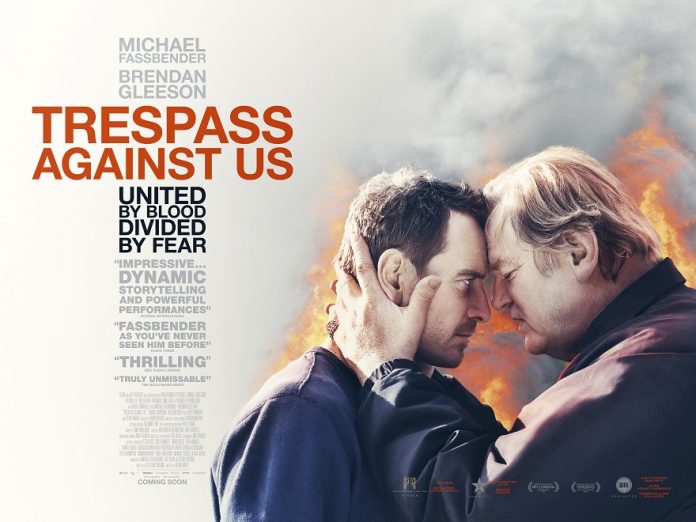 Nothing brings greater hilarity to us than inappropriately named children because for every Jack, Harry and Kylie there’s always some pillock parent who name their kids Chardonney, Moonchild or SpudUlike and if it’s a celebrity their children’s names get ever more ludicrous. Apparantly Brooklyn Beckham was so named because he was conceived in Brooklyn. Not sure if it would have been the same if it had been in Peckham.

This week’s new release ‘Trespass Against Us ‘ sees the child of a travelling community called Tyson which is almost appropriate as the six year engagingly played by newcomer Georgie Smith is something of a tearaway. Living in a caravan with his parents Chad and Kelly (Michael Fassbender and Lyndsey Marshall), amongst other travellers around an eternal bonfire of broken wood and mattresses in the middle of a field he seems to have little hope for the future. His mum has other ideas determined that he will attend the local school but equally determined to move away from the community. It’s here that Fassbender finds himself torn between keeping his wife happy, yet continuing with  the lifestyle funded by country house burglaries and also standing up to his father Brendon Gleesosn, the patriarch of the community, one minute seeming to be a bit of an oaf the next a ruthless tyrant urging his grandchildren to disbelieve anything they’re taught at school.

It’s father /son relationships which are at the heart of the film with the friction between Gleeson and Fassbender constantly on the verge of exploding balanced by the tenderness and care between Fassbender and Smith as his son wanting him to have the chance in life that he feels he never had.

Gleeson’s patriarch regards himself as king as far it’s a hierarchy he makes clear even down to an early scene about who makes tea for who. The feral lifestyle the community lead especially when it comes to the joy riding and criminality is presented as exciting for Chad so it’s hardly surprising and Fassbender is partly to blame for leading such a lifestyle when he tries to turn Chad away from it all. It’s an uncompromising presentation with both the adults and children swearing away like contestants in melt down in the Big Brother house and with the kids, on occasion, even dropping the c-bomb.  Alasdair Siddons script is fine though nothing out of the ordinary and the inevitable brushes with the law are ludicrous with little credibility to the actions taken by a vengeful police officer played by Rory Kinnear.  That aside the real pleasure here is seeing Fassbender and Glesson going head to head despite accents so heavy that many may struggle to understand what is being said until the ear is attuned.