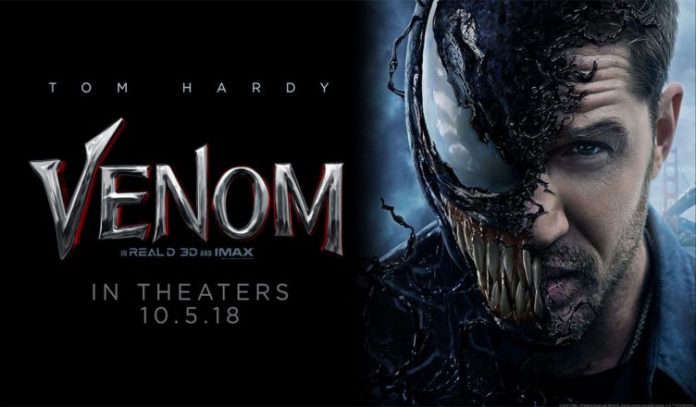 Tom Hardy’s been pretty vocal about the final cut of Marvel’s latest film Venom, 30 minutes of which he loved in the script and for which he signed on for but says is not in the final film and as a producer on the film you’d think he would have some sway. With Marvel’s first league of superheroes done, Venom is one of their second league properties who is less clearly defined as being a hero. 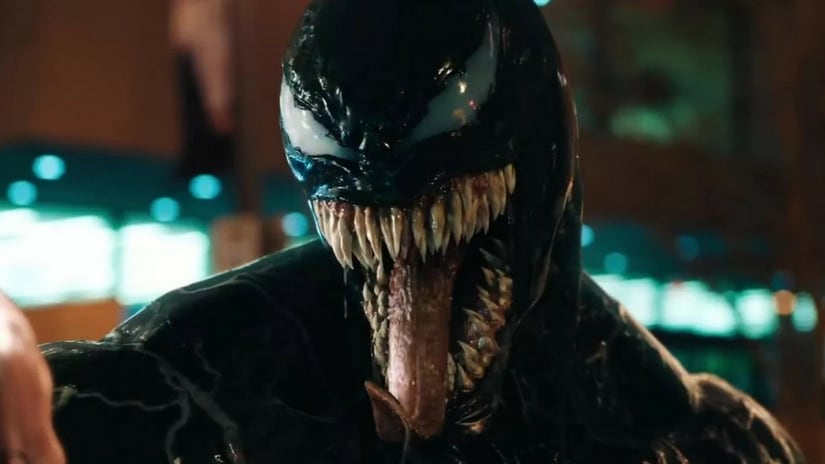 Starting with a rocket crashing in Malaysia there’s a frantic scrabble to salvage its cargo of what looks like satanic blu-tac writhing away in secure containers all of which are recovered bar one which infects an ambulance driver and kicks off a minor secondary plot as it travels the world by infecting various people and in many ways plays much like the terrific but under rated 1987 thriller, The Hidden.

Meanwhile the rest of the cargo makes its way back to San Francisco where polymath billionaire Carlton Drake (Riz Ahmed)  funds medical research using methods which are less than ethical and it’s a star TV reporter Eddie Brock (Tom Hardy) who gets wind of it. What he finds is Drake using the homeless as lab rats to play host to the satanic blu-tac which is a symbiote from another planet that needs a human host. So it’s Brock who, having been sneaked into the labs by a concerned scientist  who finds himself infected when he tries to help a homeless human lab rat to escape. 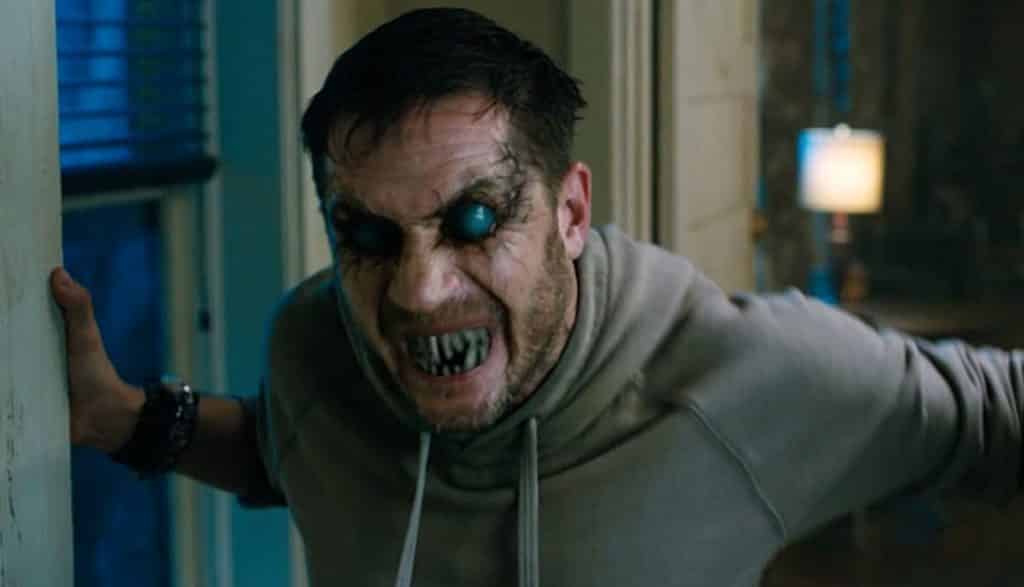 Once infected Hardy’s performance changes tack in a great turn as, finding himself contaminated by the parasite which takes control but also takes care of him when Drake’s heavies come calling. It’s a Jekyll and Hyde role with both characters inhabiting Hardy conflicted by what’s going on with his body and the voice of Venom in his head. Playing two roles in one film is something he’s proved adept at in the past when he played both Kray twins in 2015’s Legend and he proves his expertise here.

Though we saw Venom in Sam Raimi’s third and last Spiderman film the Venom we have here is far darker and from the start when he tells Brock, having seen off a gang of bad guys to, ‘Bite the heads off, pile the bodies in the corner’ like some murderously psychotic chef. And Venom’s penchant for violence is matched only by his appearance when we do finally see him in full fearsome form and this certainly fulfills its 15 certificate even if it does refrain from the full on head decapitation that Hardy was so keen to feature.

It’s a decent first two acts with black humour and its only the inevitable CGI fight fest finale that most Marvel films seems to be obliged to feature that it disappoints. Hardy shouldn’t be too down on this his first outing in the role but with the success of Logan and Deadpool perhaps the studio should have been a bit braver but as this looks duty bound to segue with the rebooted Spiderman it’s understandable. The usual Marvel tropes abound though: the dodgy big business CEO who is the real villain, the battle for mankind, the underwritten female role (here it’s the always great Michelle Williams), the tiresome Stan Lee cameo and yes, the mid credit sequence that here leads into what the sequel will be about. Bit most bizarre is the very end credit sequence which is a long time coming and is something of a first for Marvel in what is an animated and wholly unrelated scene that is both bemusing and irritating and links to a completely different film .

Ably supported by Williams and Ahmed, Hardy’s Venom is certainly not the box office poison many expected.